So we have some idea what the Sioux nation in Standing Rock Dakota and all the First Nations people gathered in the Dakotas are facing as they resist the desecration of their graves and sacred lands.

When graffiti taggers deface gravestones with their mark -- or symbols of hate like swastikas, outcries and headlines condemn the scurrilous act. But in the Dakotas, Native American gravesites were bulldozed recently in a shocking act of grave desecration. The bulldozers cut a swath through historic grounds to destroy evidence of the graves and to stake corporate claim to the land as a preemptory act of violence instead of waiting for a pending court decision. The company brought in vicious dogs that bit peaceful protestors. Despite dogs and pepper spray, the resisters continued to stand in the way until the bulldozers finally stopped. I thought, as a nation, we were done with using dogs to control and punish protestors, but this is not the case. 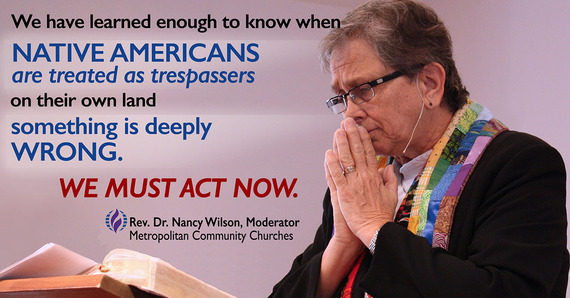 Tribal Chairman, David Archambault II said, "This demolition is devastating. These grounds are the resting places of our ancestors. The ancient Cairns and stone prayer rings there cannot be replaced. In one day, our sacred land has been turned into hollow ground."

The pipeline company, Energy Transfers Partners (ETP), blatantly ignored the recommendations of multiple official departments: the Department of the Interior, the Environmental Protection Agency, and the Advisory Council on Historic Preservation. Each of these groups recommended more study before moving ahead with the Dakota Access Pipeline (DAPL).

Because burial grounds do not resemble European-style headstones, companies like ETP consider the burial sites to be open prairie. Just as when Europeans arrived in the Americas and decided there was nothing there since settlements did not look European, to this day, Native peoples are invisible and inconsequential to business interests. Racism's strategy of invisibility is alive and well today.

When the court decision came down, shockingly, it went against the Native American claims of burial grounds and allowed the bulldozing to continue. In virtually the same moment, I learned that the Obama administration had stopped the construction of the pipeline through Native lands in the Dakotas. I can only imagine that President Obama and I shared similar feelings of horror as we watched dogs viciously attack Native Americans as they stood to protect the land and water against oil defilement. It may well be another legacy of the Obama Administration that this plea for justice from Native Americans was not ignored.

As the Global Moderator of Metropolitan Community Churches, I join religious leaders from Methodist, Presbyterian, Episcopal, UCC, and others who have spoken out to support the stand of Native Americans. We know that both the government and the churches have a long history of exploitation, betrayal, broken treaties and wars. We have learned enough to know that when Native Americans are treated as trespassers on their own land, something is deeply wrong. We must act now. When the land is gone and the water is gone, there will be nothing left to save. For all Americans, the future of our children depends on a rapid shift to sustainable energy sources.

In the Dakotas, construction is paused, but we call on the U.S. government to stop construction on all pipelines. Oil is poisoning our waters and land. For Native Americans, this is just one more expression of genocide. Even the American Petroleum Institute projects spills of 40,000 barrels of petroleum products this year. Right now, almost 15 billion barrels of oil traverse the pipelines. Global warming and the poisoning of our land and water give us no option but to end the burning. This is a crime against humanity and a crime against nature. Those who are most vulnerable, the poor, those with little power or voice, will be the ones most impacted.

When will we learn? How do we stop the defilement of sacred lands and the despoilment of our waterways while our climate heats beyond all recognition? We must stop the burning and turn to renewable energies. It can be done, but there is not much time to do it. May all our relatives be blessed.