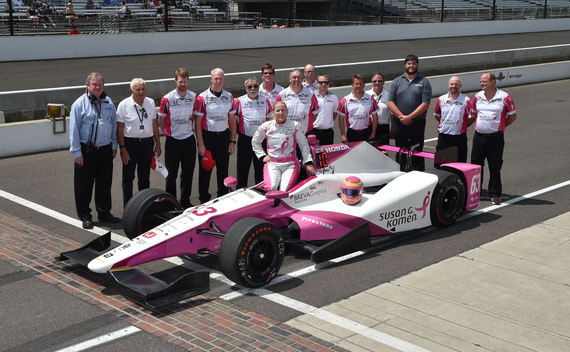 She's got 4 Indianapolis 500 starts. She's got endless energy and hustle. She's wonderful with fans and sponsors. She's great with social media. And now, she's a successful crowdfunder too.

Yet, the road to an Indianapolis 500 drive never gets easier and always requires a lot of personal sacrifice for British IndyCar driver Pippa Mann.

But, when she does manage to get a shot at Indy (she'll make her fourth consecutive appearance at Indy this May with Dale Coyne Racing, and her fifth overall), unlike some other drivers in a sport often driven by big egos, she focuses all the attention on those who need it more. Each May, she splits her month between driving the car and advocating for Susan G. Komen and raising funds for the foundation.

Last year, we talked with Pippa about how she traded her helmet for some HTML to launch the first iteration of the campaign. This year, after a challenging qualifying weekend, we were grateful that Pippa took a few minutes with us to share what's she's done differently this year, and how her strategy with the #GetInvolved campaign has evolved.

What was the single thing about last year's campaign that made you most excited?

The fact that we found a successful way to get race fans involved, and excited about what we were doing. That was really cool.

What's the one thing you would have changed?

I learned not to do T-shirts ever again! Too many different sizes, and you end up with stock you can't sell. That's why this year signed items have focused on caps, or other non-wearable items instead!

What makes this year's campaign special?

I think the fact that we still have several days to go, and that we're already so close to our final total last year is pretty special. However it's going to be hard giving up my race worn helmet this year - that's for sure.

How many people have helped you with building and launching campaign so far this year?

I built the campaign myself, but Indiegogo are a great partner, and they always have fantastic suggestions. This year a company in Indianapolis, Torchlite, has created campaign social media to help keep driving things along when I can't tweet or talk about it as much across my channels, and they created the early access email, the follow-up email, and we have one more email to go out through them late this week too. I also have an intern this year. She's helping me stay on top of the shipping, because unlike most other campaigns we ship out while the campaign is going on. So it's a much bigger team than last year, but I'm still the one who holds most of the responsibility.

Each year, Pippa rides with tributes to those fighting or who have fought cancer in her cockpit. Photo: #GetInvolved campaign on Instagram

Last year was a challenging one on the track at Indianapolis. But yet, you never gave up. What motivated you to power through?

I think it was having those names in the cockpit with me. You can't give up when you're surrounded by people who are fighting, or who have fought cancer.

How difficult is it to manage the dual role of driver and fundraiser during a very busy month of May?

Last year after I got hurt, it was incredibly tough. However this year, with the extra help, and staying in one piece throughout the month, it's been better. There have been some very late nights when I wish there weren't, up until midnight or 1am in the middle of Indy 500 testing and race car driving, trying to stay on top of everything, but overall, I manage. I'm also better at it than I was last year - a year of experience helps!

What does being the only woman in the 100th Indianapolis 500 mean to you?

You know, to me it's more important that I am in the 100th Running of the Indianapolis 500, and that I'm in another Indy 500 - full stop. I think maybe that conversation comes some time later when you look at the history books.

Every year presents a new challenge in putting together your Indy 500 package. What keeps you excited about coming back?

I don't think most people realize how tough it is to put together the budget to make a car run. I don't have one big major sponsor - I have lots of smaller companies all banding together to make this possible, and I'm constantly working to try and grow those so that we can get the racing part of this program to the point where it breaks even, and then starts to hopefully become sustainable. It's an entire year's worth of work to be here, but it's my dream. That's what drives me.

How many more Indianapolis 500's do you see in your future?

Hopefully many more, but as I mentioned above, I have to find a way to start finding some bigger companies who want to sponsor and partner with me. The way I'm doing things now is only sustainable short term, so the pressure is really on to try and make things happen in a much bigger way. 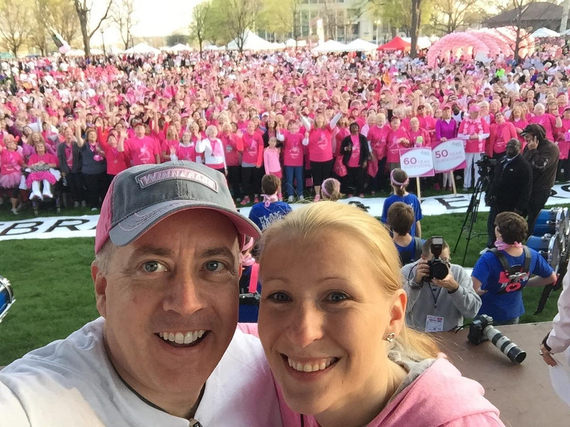 During the racing offseason, Pippa still spends a time advocating for the cause. Photo: Pippamann.com

How have new sponsors and partners helped evangelize the campaign and your efforts on and off the track?

BREVAGenplus has been an incredible partner so far this year, both in terms of their support for the racing program, in terms of their activation, and in terms of their participation in the campaign. Because they are also in the fight against breast cancer, our messages have teamed up so strongly that we've been able to do a lot of great activation pieces together.

You had a career-high of 6 starts and 2 career-best finishes in the Verizon IndyCar Series last year. Did that help your planning and mindset for 2016?

The biggest help from last year is actually that my engineer from the 5 races after Indy, Ridge, is back engineering me this year at the 500. That's the first time since I was in Indy Lights that I've had that kind of continuity, and I think it's been showing with our performance so far overall this month. We've been very strong, and through qualifying weekend we faced some real adversity, but because we've worked together before, and we get on so well, it's made the whole process of getting through that adversity so much easier.

What's your #1 dream as a race car driver?

It's the same as the other 32 drivers in the field this Sunday... To one day win the Indianapolis 500.

Want to #GetInvolved as part of Pippa's campaign for Susan G. Komen? Many great items remain available on her Indiegogo campaign page. And don't forget to follow her adventures real-time as she starts 25th in the 100th Indianapolis 500 on her social media on Twitter, Facebook and Instagram too!