Imagine loving football more than anything else in the world. You train hard just to get a chance to play. But, because you couldn't bring enough money to pay for your helmet, uniform, or get access to practice facilities, you have to sit out just about every game. Until, on the day of the Super Bowl, comes a giant chance to make a big impression.

This is the reality of the situation that is faced by just about every racing driver at one point or another, especially in the upper leagues of auto racing -- namely Formula 1, NASCAR and in the IndyCar Series. Racing is at its heart a highly entrepreneurial enterprise, as team owners need to find budget to operate race cars, and drivers need to find quality cars to drive.

Last year, I wrote about how social media is helping to bring fans back to the Indianapolis 500 -- the Super Bowl of American auto racing. But social media can impact the lives of racers as well, providing sponsorship opportunities, support and a chance to connect with fans.

So why Indy? It's simple. The traditional field size of the Indianapolis 500 (33 cars get to start the race, compared with typical races that field 24-26 cars) offers a chance for a handful of drivers who don't race a full IndyCar season to put together a program to run on one racing's richest paydays. But it also opens up exposure to a worldwide audience who tune in for the tradition, the speed and, yes, to watch the victor capture the spoils (Tony Kanaan won $2,353,355 for his 2013 win) once a year. 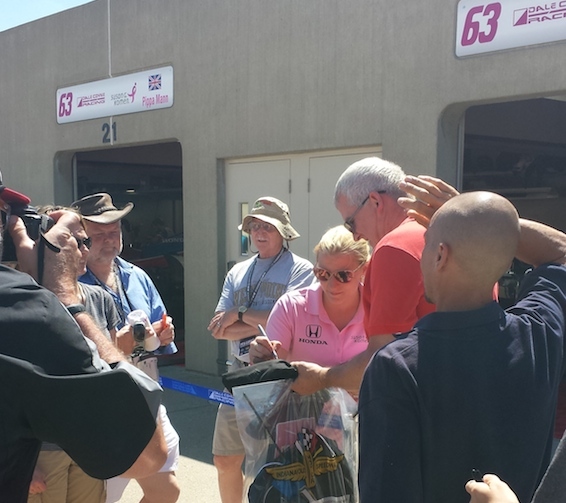 Enter Pippa Mann. She is a 30-year-old IndyCar driver from England, who now resides in Indianapolis. Without a full-time team, she represents one of these drivers who spends a great deal of time putting together her race schedule -- working with teams and sponsors to help find the funding for another chance. This, of course, includes the Indianapolis 500, which she has now completed three times. 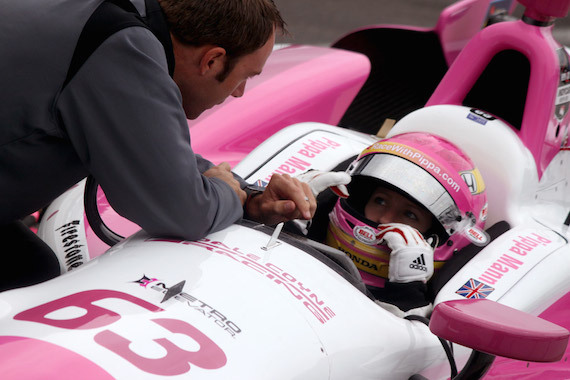 Appropriately enough, she drove the pink (Susan G. Komen's iconic color) #63 Dale Coyne Racing Honda Dallara. Through the hashtag #PippaGoesPink, Pippa shared her adventures through the month, and on racewithpippa.com fans could donate for every lap Pippa completed in the car during Indy 500 practice, qualifying and the race. The proceeds go to benefit Susan G. Komen's mission to "save lives, and end breast cancer by empowering people, ensuring quality care for all and energizing science to find the cure."

One of the things that made Pippa an even more ideal candidate to be an advocate for the cause was her love for, and expert use of, social media to keep fans, sponsors and teams informed of what she's doing, and for sharing a true slice of who she is.

She personally manages her own social media accounts (just try to tweet at her at @pippamann or tag her in an Instagram photo -- she'll often respond), has a great appreciation for the racing business (she spends time calling IndyCar races she's not driving in on the radio with broadcast legend, Paul Page), and is extremely likable (she's lovely to talk to and always willing to go out of the way for her fans). She has a personal passion for extending opportunities for women in racing through her involvement with Glass Hammer Racing as a driver mentor. This made her an ideal representative for the Susan G. Komen effort, and makes her stand out among her driving peers. 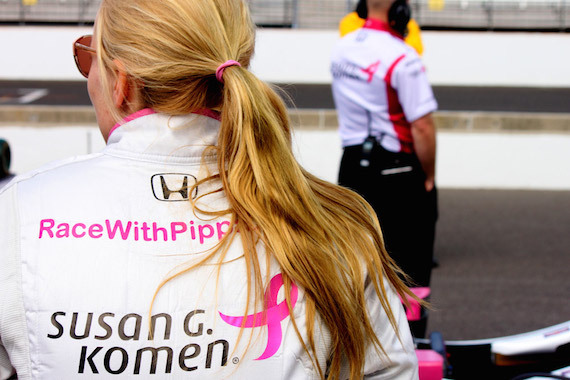 I recently had a chance to catch up with Pippa and find out how social media has helped her keep her driving career active, kept her motivated during tougher times and to allowed her to be an advocate for causes she believes in, including spreading the message that can save lives.

How did it all begin for you on social media?

"I started out with Facebook, then got introduced to Twitter in 2009 when I came to the US to race Indy Lights (the last stop before drivers reach the IndyCar Series). My first tweets were about as uninspiring as it seems everyone's first tweets were back then - yes I did go and look it up when that was the thing a few months ago! Since then everything has evolved so much, and I'm now full throttle on Twitter, and Instagram, and try to keep my Facebook and Pinterest as updated as I can too!"

Why is doing your own social media personally particularly important to you?

"Social media gives me the unique opportunity to connect with fans, and people whom are interested in what I'm doing directly. It allows me to be available to young, up and coming female racers who might want to reach out, but don't have my contact details, and it allows me to be available to respond to questions race fans send me, and to stay in touch with them on a personal level about what I'm up to. It's extremely important for me that I do my own social media as much as possible, and Hannah and I are very clear when I have someone else hop on my account as all tweets from her state "PR", but you'll notice that only happens when I'm either in the car, or at some event where I have to be "available" in person, and not buried in my phone!"

How do fans keep you motivated when you're not in the car?

"I have always been, and will always continue to be extremely independently driven. Encouragement is a wonderful thing, and even insults can provide stellar motivation, but the drive to succeed and make things happen has to come from deep within you, otherwise when the odds are stacked against you, you simply can't get this stuff done. It has however been amazing to see the level of support for me as a part-time driver, for me when I'm between rides, and I just have this incredible fan base that I can't thank enough for continuing to be there behind me!"

How much did having a great social media strategy help sway Susan G. Komen to join a partnership with you?

"I genuinely don't know the answer to that, but I can tell you that when you're working to put together a partnership with an organization the size of Susan G. Komen that they would have certainly done their due diligence on me through their own channels, and that would have obviously included going through my social media, etc. My accounts are obviously much smaller than theirs, but this May they have seen how passionate and driven race fans can be to help spread the word, and I know they have enjoyed seeing the reception that we've had to the launch of our pink partnership!"

What makes the Susan G. Komen message so important to share?

The "1 in 8 women in the US will be diagnosed with breast cancer" statistic is scary when you realize just how many women 1 in 8 means. But this year, the amount of survivors I have met, who have come to my garage, to meet me, to take a photo with me, to shake my hand, to get an autograph, to tell me how proud they are to see this pink car carrying the Susan G. Komen name on track... It's just been staggering, and so incredibly powerful it's almost overwhelming. 1 in 8 is no longer simply a scary number any more, it starts applying to all of these real people, real women around me, and just so many of them. And as this piece is about social media too, it's not only the women whom I have met in real life this May, when you start to add in the amount of survivors.

So now that you've finished your third Indy 500, what's next?

"The important thing about this partnership is this was never intended to be, and will not be a "one and done" adventure. We plan to continue this partnership, and build it together to make it stronger, starting with the pink Susan G. Komen IndyCar coming back in 2015, and being accompanied by all of the merchandising that we wish could have done for this year. This includes T-shirts, caps, die cast cars, mini pink bell helmets... We're hoping to turn even more of IMS pink not only next year, but going forwards in the future too."

How did Pippa do at Indy? She started 22nd, her best Indy 500 start, and finished 24th after mechanical issues dropped her back early, completing 484 laps in the month of May. But, she'll be back. Her social media posts continue to inspire others, and be inspired by someone who just wants to go fast.