Sheriff's deputies in Northern California's Humboldt County have uncovered a cave filled with over 100 firearms, 117 pounds of marijuana, stolen vehicles and $12,000 in cash in a hidden cave and on its adjoining property.

Law enforcement officials discovered the cave, which had been camouflaged with brush to keep out intruders, on the 55-acre property of 30-year old Humbolt resident Ryan Floyd.

Elsewhere on the property, officials found stolen jewelry, methamphetamines, body armor, heroin, thousands of rounds of ammunition, drug scales, a stolen tractor and over 40 other vehicles. "This is one of the largest hauls that we've ever seen," said Sheriff's Department Public Information Officer Lt. Steve Knight.

The cache of weapons, nearly two dozen of which have been confirmed as stolen, included Colt AR-15s, sawed-off shotguns and fully automatic WWII machine gun.

“I can't think of any other reason to possess this many weapons unless you're manning a small militia,” Humbolt Country Sheriff Mike Downey told KIEM TV.

There has been some speculation that Floyd was intent on selling the weapons on the black market. At the time of his arrest, Floyd was also wanted on an outstanding warrant for possession of illegal narcotics while armed.

Authorities initially became interested in Floyd earlier this month after a deputy attempted to pull over a black pickup truck without license plates that was driving erratically. The truck refused to pull over and police engaged in pursuit. The driver drove the car down a hillside and crashed into a tree. By the time police got to the vehicle, the driver had already fled. Officers later determined that it had been stolen and began looking at Floyd as a person of interest in the case due to evidence that had been left in the truck after the driver had exited.

Downey added that this isn't the first time he's seen this same piece of property allegedly used for criminal purposes. Downey explained to NBC News that he had gathered information about Floyd's now deceased father on the site for drug and theft charges over a decade ago.

"This is a piece of property I had been to numerous times surrounding the same type of criminal activity," he said.

Clarification: Language has been amended in the post for consistency as to where the various items were discovered.

Check out these photos of the bust: 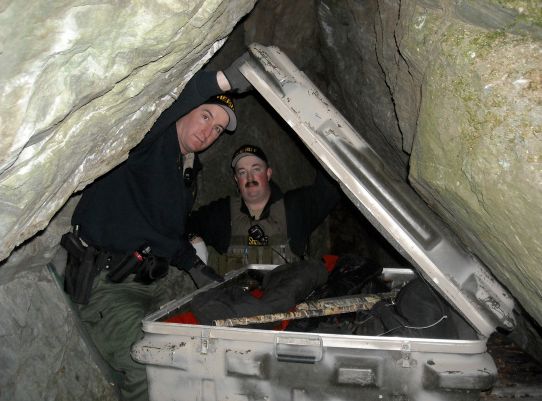