This post is co-authored by Logan Cotton, a Research Associate at GlobalSolutions.org 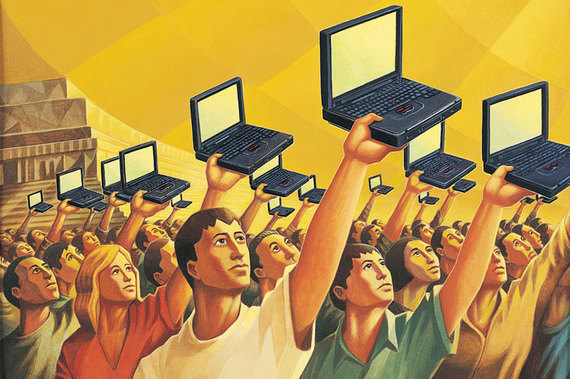 Digital technology has drastically impacted some of the most routine facets of our lives. Beyond this new threshold of interconnectedness, we should consider digital technology's impact on citizenship and governance in the future.

When Gutenberg invented the printing press in 1436, he knew it would ease the labor of monks who spent all day manually copying the Bible. He probably didn't think it would fuel colonization of the New World, make custom T-shirts or enable representative democracy. Imagine the difficulties of lobbying, holding elections, and organizing political parties without the ability to mass produce written correspondence.

In Guns, Germs, and Steel, Jared Diamond says, "Invention is often the mother of necessity, rather than vice versa." Diamond's point, outlined in the NY Times, is that inventors often create new products and the society finds a use for the product afterward.

Just as Gutenberg did not anticipate his press would promote literacy, mass media, and eventually enable the rise of Twitter, today's technological developments have immeasurable possibilities.

We take the nation-state for granted, but the idea of "state sovereignty" was also invented. The unrelenting force of digital communication has complicated the usefulness of geographically determined borders and communities. Globalization, the prominence of non-state actors, and the nature of global challenges -- like mass migration and climate change -- have shown us that we are confronting 21st-century problems with 17th-century tools.

Looking toward the future, the movement of people and money will continue to outpace the ability of any one government to control them. Technology has perforated the concept of national sovereignty. Nations no longer control their currency or the information flow across their borders. In response to this new reality, international organizations like the UN and WTO and regional blocs are blossoming around the world. The relevance of the "state" as we know it continues to erode with every bloc, common currency, and open border.

Democracy, too, has been affected by technology. Germany's Pirate Party (yes, it exists, and holds 45 seats in German state parliaments and 1 seat in the European Parliament) has developed something called "Liquid Democracy." With Liquid Democracy, citizens use a web-based platform to assign their votes to delegates who can best represent them on different issues. This method of voting has enabled members of the Pirate Party to more dynamically participate in decision-making.

At the intersection of the material and virtual worlds, web corporations are being lobbied by groups to maintain privacy protections and advance human rights. Facebook, for example, has 1.28 billion monthly active users. "Facebookistan" would be the second-most populous country after China.

When many Taiwanese activists abruptly had their Facebook deactivated without explanation, citizens pushed Facebook to be more accountable. Taipei City Councilor Ho Zhi-Wei wrote an open letter to Mark Zuckerberg arguing that Facebook, as a publicly traded company, has an obligation to promote public welfare. As citizens surrender more time and information to the Net, they are also demanding more protections and rights from these "benevolent sovereigns."

For many of us, our social networks are no longer defined by where we live. Instead they are tied to our professional, social or political interests. In the future, these networks might supplant where we live as a means of determining how we are represented as citizens.

Many of us have an idea of the future we would like to see. We expect human rights. We want to avert climate change. Bottom line, we want governments to provide us sufficient security in return for the personal sovereignty that we delegate to them. When national governments can't do the job, we'll need to develop something more effective. We know what values we want to uphold, though the path forward is mysterious.

Regardless, we know that digital technology is pushing humankind toward a networked and globalized future. Gutenberg couldn't have imagined that his humble press would aid the rise of representative democracy. Certainly, any efforts to create an often-dreamed-of global democracy will grow from our current technological revolution. Perhaps the next great invention, the one that will help us implement global solutions, has already been invented and we simply haven't found its proper use.