Serrano's photograph, depicting a crucifix floating in a cup of urine, has long been a subject of controversy. Nearly fifteen years after critic's initial shock in the late '80s, Serrano was still receiving death threats as a result of the work. A group of protesters attacked the piece at a 2011 exhibition, using a hammer. And the Catholic League reignited its vocal opposition of the image in 2012, and once again in 2014.

Yet, through it all, the image had remained accessible via the AP. Until today. 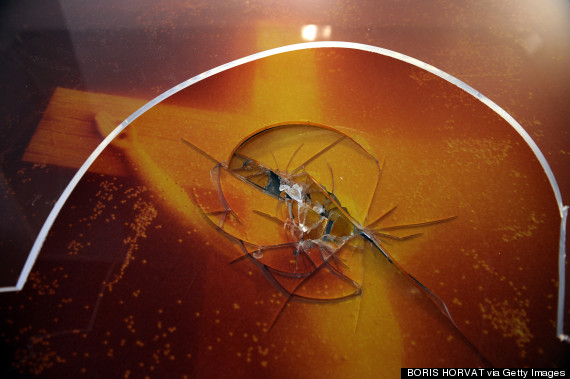 Picture taken on April 18, 2011 shows "Immersion Piss Christ," a controversial piece of art by US artist Andres Serrano from the contemporary art collection of the Lambert foundation, in Avignon southern France, after its partial destruction by two catholic activists. (BORIS HORVAT/AFP/Getty Images)

The AP is one of several news sources to blur or crop Charlie Hebdo cartoons depicting the Islamic prophet Mohammed. "It's been our policy for years that we refrain from moving deliberately provocative images," AP spokeswoman Erin Madigan told Politico on Wednesday.

However, the Washington Examiner's Timothy P. Carney noted that while the AP had removed these images of Mohammed, the outlet kept "Piss Christ" on view. Breitbart similarly criticized CNN for making the same decision.

Then, in the wake of the attacks -- and the posting of Carney's article, AP images of "Piss Christ" were removed, and the photos are no longer accessible online. Gawker's Andy Cush was one of several writers who also noticed the photos' disappearance. "If they were [removed]," wrote Gawker's Andy Cush, "it is a cowardly and unfortunate capitulation to the men who killed 12 people today in an apparent effort to quell speech."

We have reached out to the Associated Press for comment but have yet to hear back.

Despite this potential act of self-censorship, artists around the world have shown they refuse to be silenced, revealing that a pen and pencil are the most powerful weapons of all. See the images below.