If you're hoping that restricting dogs by breed will lead to fewer dog bites, well, you're barking up the wrong tree, according to the author of a study published last month in The Veterinary Journal.

Páraic Ó Súilleabháin -- a doctoral candidate in psychology at National University of Ireland, Galway, who focuses on human/canine interactions -- looked at government-collected hospitalization records to see if dog bites had gone up or down since Ireland imposed breed-based dog regulations in 1998.

What Ó Súilleabháin found might come as a surprise to those who still believe breed specific legislation, or BSL, leads to safer communities: Hospitalizations due to dog bites have gone up since Ireland's Control of Dogs regulations went into effect.

Under this legislation, 11 types of dogs -- like Staffordshire bull terriers, American pit bull terriers, Rottweilers and Dobermans, plus related mutts -- must be muzzled and on a short leash in public, and walked by someone over the age of 16.

The law was intended to reduce the number of dog bites. It hasn't worked, Ó Súilleabháin tells The Huffington Post -- and may even be contributing to the increase in bites, by encouraging the misperception that keeping some dog breeds muzzled is the beginning and the end of dog bite prevention.

"Bites have been continuously rising since its introduction in Ireland," Ó Súilleabháin said. "In reality, BSL could very well be adding to the likelihood of people being hospitalized." 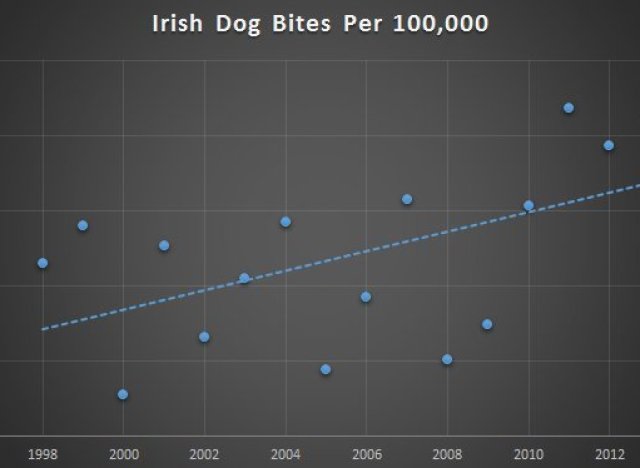 HuffPost caught up with Ó Súilleabháin -- himself the owner of a Rottie named Rory -- by email to find out more.

The Huffington Post: What questions were you looking to answer in your paper, and what was your conclusion?

Ó Súilleabháin: I wanted to find out if a reduction in the most serious dog bites in Ireland -- hospitalizations over a number of days -- has occurred since the [breed specific] regulations were brought into law.

The main conclusion, which is in line with research internationally, is that breed specific legislation is not effective in reducing serious dog bites. Very serious dog bites in Ireland have significantly increased and are continuing to do so. Children under 10 years are particularly at risk as they accounted for nearly half of all hospitalizations.

There are scientifically valid ways to reduce dog bite incidence rates which have been shown to be very successful. Breed specific legislation is not one of them.

Why might breed specific legislation lead to an increase in the number of dog bites?

The impact it has on people's perceptions [is] that dogs can be categorized as potentially dangerous or not based on appearance -- breed -- [which] will make it more likely for people to have a false sense of security or act differently around non-regulated breeds.

What else would you like people to know about your study?

Regulating dogs based on breed to reduce serious dog bite injuries or fatalities is not an effective way to keep communities safe. It has no basis in scientific evidence and is in fact contrary to it.

For instance, research examining human fatalities due to dog bites over a 10-year period in the U.S. found that the only contributing factors to a fatality were under the control of the owner and the victim.

How has BSL affected you personally?

I am unable to walk my dog and interact/play with him in public when he must wear a muzzle. Of course should he need to be muzzled for any valid reason he would be. His personality [is] ideal for therapy/assistance work, [but] he's unable to work in hospitals, nursing homes, clinical psychology settings and schools for autism, etc., due to having to wear a muzzle.

Ideally I would like to work to establish a dog therapy program and -- in line with other international therapy programs -- have it open to all breeds, and for a dog’s inclusion to be based on examination and personality assessment.