Pit bull fans from all over the country will gather in the nation's capital a few weeks from now for the inaugural One Million Pibble March on Washington. The May 3 rally is meant to advance the well-being of this beleaguered breed, whose members are known affectionately as "pibbles."

In about three weeks, Los Angeles-based comedian and pit bull advocate Rebecca Corry estimates, as many 5,000 people will assemble on the West Lawn of the U.S. Capitol, asking that government resources be dedicated to eradicating dog fighting and that laws restricting the ownership of pit bulls be abolished.

Who won't be there? Dogs, even very well-behaved ones, are not invited.

Even Corry's own pit bull, Angel, who was severely abused by previous owners, won't be at the rally, though she may appear at a pit bull fundraiser/comedy showcase at the Arlington Drafthouse in the D.C. suburbs the night after the march.

It was at the Arlington Drafthouse last year that Corry first announced her Washington plans. Angel was there, in a pit bull kissing booth; Corry has been organizing the event more or less solo ever since. 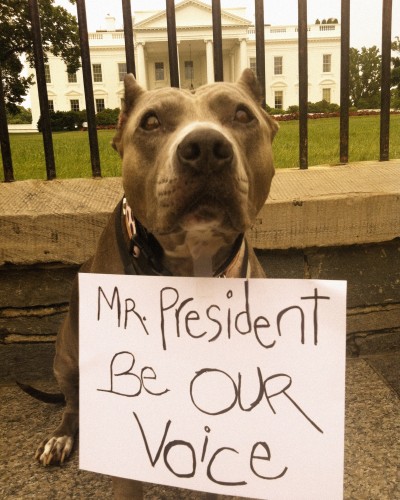 Corry's dog Angel in front of the White House, during a 2013 visit. Photo credit: Rebecca Corry


Celebrities including Courtney Cox, Janeane Garafolo and Moby have since lent their names to Corry's group, Stand Up For Pits. But even folks who are deeply disposed toward the cause have criticized some of her decisions, like not allowing vendors into the rally to sell pit bull merchandise, and not letting food trucks in to feed the demonstrators.

Most controversial is Corry's decision to exclude dogs from the event -- a choice she has repeatedly, exasperatedly addressed on Facebook, on the phone, in emails, in interviews and in this blog post, which focused on the dangers inherent in bringing lots of dogs of any breed together into what could be a stressful situation.

"Dogs are not allowed at the march because, simply put, dogs cannot change laws. The U.S. Capitol is not a dog park and this is not an opportunity to make it one," she wrote.

No, they can't -- "It's a human-only event," she repeated -- and neither can can the featured speakers, whose ranks include the human parents of famous pit bulls, who will be talking about their experiences with anti-pit laws and policies and the need for reform, as well as the actor Chris Williams, Vanessa Williams' dog-loving little brother.

Who else will be there? Some 5,200 people have said on Facebook that they're coming -- they've also been posting incredibly cute photos of their own pit bulls, along with messages about why they support the march, such as:

I'm going in honor of my Sierra, a 6 year old pit mix who shattered my fears of her breed and showed me love I never knew before. Heart and soul she is my daughter. I adore her tailwags, her kisses, her snoring and the way she sounds like Chewbacca when she talks to me. It's believed she's immune deficient and has a hard time fighting off infection. I don't know if I can fix her but I can promise to love her and do my best for her. What better way to repay her love for me than to march in DC to protect the rights of her brothers and sisters?

For that, and the details of the march, you should check out the One Million Pibble March event page.

Still up in the air: Maryland's governor, Martin O'Malley (D) -- who just this week signed a law under which Maryland no longer considers pit bulls to be "inherently dangerous" -- has been formally invited to the rally, but hasn't yet RSVPed. Same with President Barack Obama, who last summer took a stand against "breed-specific legislation," as laws constraining pit bull ownership are known.

"I don't really expect the leader of the free world to come and be the voice for pit bulls. I'm a pretty realistic person," said Corry, launching into a discussion of permits, insurance, the folding and mailing off of Million Pibble March T-shirts and, always, the tussling with people who disagree with her firmness on the issue of there being no dogs at the rally.

"I'm a pretty cynical person with no filter and I really don't give a shit what people think because I do this to save dogs, I don't do this to make friends," she said. "But I'm also a hopeful person."

There's some reason to be hopeful: Despite grim statistics about euthanasia rates and the ASPCA's assertation that dog fighting, which most often involves pit bulls, is still a depressingly common phenomenon, a number of states are considering -- and passing -- pit bull-friendly legislation. It is now, also, a federal crime to attend an animal fight.

And the most recent comprehensive report, put out in December by the Journal of the American Veterinary Medical Association, shows that fear of pit bulls is seriously misplaced, and that pit bulls bans do not lead to increased safety.

"It has been an amazing thing to witness the excitement of people all over the world supporting this event and ending abuse and discrimination," Corry said.

Now with the march almost here, and the questions about dog attendance and food trucks very nearly moot, she said that there are a few things, but only a few things, she'd have done differently.

"I would have done it 10 years ago and had the help of 100 people. Other than that, I gave this everything I had every minute of every day all year. No regrets," Corry said, adding she hopes "no one brings a dog to this event."

All the better if others are inspired by her efforts and that they realize if "she can do that, in a one-bedroom apartment, no money, not a dollar, then I can do it," too.

"I don't want a pat on the back. I'm doing this because it's disgusting that we even have to do this," said Corry. "And Angel's so sick of hearing me talk about it. She's like, 'When is this shit going to be over?'"