"Finally, when my head got hit against the wall, she just grabbed his pant leg and she was done. She was done with him abusing me -- and abusing her," Kraczkowski told Detroit Fox affiliate WJBK-TV.

But now Isis -- also known as Ice -- has been told to leave town.

Not because of anything she's done, but because Hazel Park, Michigan, has a law forbidding dogs with Ice's appearance from living in the city.

Ordinance No. 08-08, which has been in effect since February 2012, defines "any pit bull dog" as a dangerous animal. This classification extends to several types of terriers -- and "dogs which have the appearance and characteristics of being predominantly of the breeds of dogs known as the Staffordshire Bull Terrier, the American Staffordshire Terrier, or the American Pit Bull Terrier."

Dogs meeting this description are prohibited from being owned or kept inside the city.

Animal advocates aren't too happy with the rule.

"It basically says pet owners are welcome to live in our community, except you and you because your dogs look a certain way," Courtney Protz-Sanders, director of Michigan's Political Action Committee for Animals, told WJBK.

Laws banning or otherwise restricting the ownership of dogs by breed or appearance are on the decline -- and for good reason. Groups like the American Veterinary Medical Association and the American Bar Association (and even President Barack Obama) have denounced the restrictions as harmful to families, dogs, due process and the economy, without increasing public safety.

Breed-specific legislation is typically enacted at the city or county level -- the group Animal Farm Foundation keeps a map of which jurisdictions have BSL -- but 19 states have now restrained or prohibited localities from restricting dogs in this way.

Fred Kray, an attorney specializing in pit bulls and the law, who has successfully challenged other jurisdictions' breed bans, tells The Huffington Post he thinks Hazel Park's ordinance, in particular, is constitutionally problematic.

"It says if there is reason to be believe there is a violation, the city has the right to notify the owner and tell them that they need to remove the animal from the city. All this without any hearing on the unilateral decision to classify the dog as a pit bull under the definition," he said. "If that is how it is enforced, that would violate a person's due process rights."

Hazel Park's city manager, Edward Klobucher, told HuffPost that he, and other city authorities, still support the Hazel Park pit bull ban -- and that he doesn't have the authority to give Ice an exemption, in any case.

"No discretion," he said.

This week, Jamie Dopke was sentenced to 40 days in jail for a different domestic violence charge; he was arrested and released on bail after turning himself in last week for this more recent incident, according to Hazel Park Police Chief Martin P. Barner. A pretrial hearing is scheduled for March 19.

"We will work with her to try to give her some time to find alternative housing for herself and/or the dog," he said.

Protz-Sanders attended a Hazel Park city council meeting on Tuesday night. She told HuffPost it went "better than expected," with some indications that lawmakers might be amenable to reviewing their anti-pit prohibition in favor of a breed-neutral dog safety ordinance.

She's also hopeful that the Michigan legislature might take up a bill this session that would do away with BSL state-wide. "We're encouraged," she said.

In the meantime, Kraczkowski told WJBK that she is scrambling for a solution to her current situation. "I don't know what's going to happen with my dog," she said. "I definitely don't feel safe without her."

A GoFundMe campaign has been started to help relocate Kraczkowski and Ice. Just under $600 had been pledged, as of Wednesday morning.

This notice, giving five days for all pit bulls to be removed from Hazel Park, was left by city officials at Mike Toma's rental home on Wednesday afternoon: 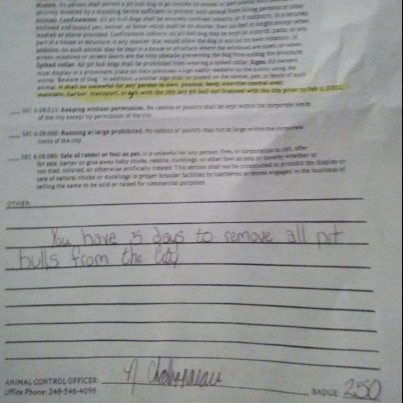 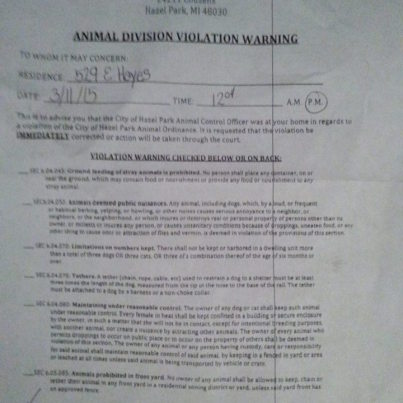 Toma's dogs -- Puppy, who is 15 years old, and Diesel, who is 2 -- both have lived with him since they were young. Neither, he said, has shown any sign of being dangerous.

Toma, who is friends with Kraczkowski and has helped organized support for her and her dog, said that he will be asking the city for more time to seek a solution. But if forced to choose between his home and his dogs, he will find a new place to live.

"I'm not in a financial position to pick up and move, either," he said. "I just feel this is very wrong." 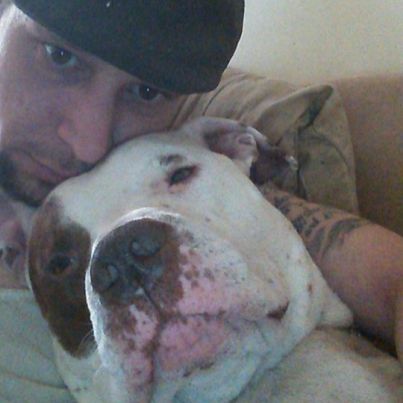 Toma -- who, as of Thursday, has an online fundraising campaign to help with moving expenses, too -- with his dog Diesel. Photo credit: Mike Toma