A bit of patience and a whole lot of TLC has transformed a terrified pit bull into a bundle of slobbery, loving joy.

In the video above, watch the nail-biting rescue of Thor the pit bull from a Los Angeles recycling facility.

Eldad Hagar, co-founder of Hope for Paws, rushed to the facility to save the dog from a potentially hazardous situation. The animal rescue group had been contacted by the center after workers discovered the pooch hiding amid piles of trash.

Hope for Paws told The Huffington Post that it was “one of the trickiest” rescues that Hagar has ever performed. The facility provided a bulldozer and an excavator to help with the rescue, but the pit bull was so frightened that he kept running away, precariously bounding over loose trash heaps and forcing Hagar to attempt the rescue on two different days.

When Hagar finally managed to contain Thor in a confined space, the scared dog began barking furiously and baring his teeth.

Hagar kept a safe distance away, all the while talking soothingly to the dog.

“I had to go slow and be patient,” he said in the clip.

His patience finally paid off.

Hagar drove Thor to the vet, where the dog received medical treatment and was given a much-needed bath.

Before long, Thor and his rescuer became the best of pals. 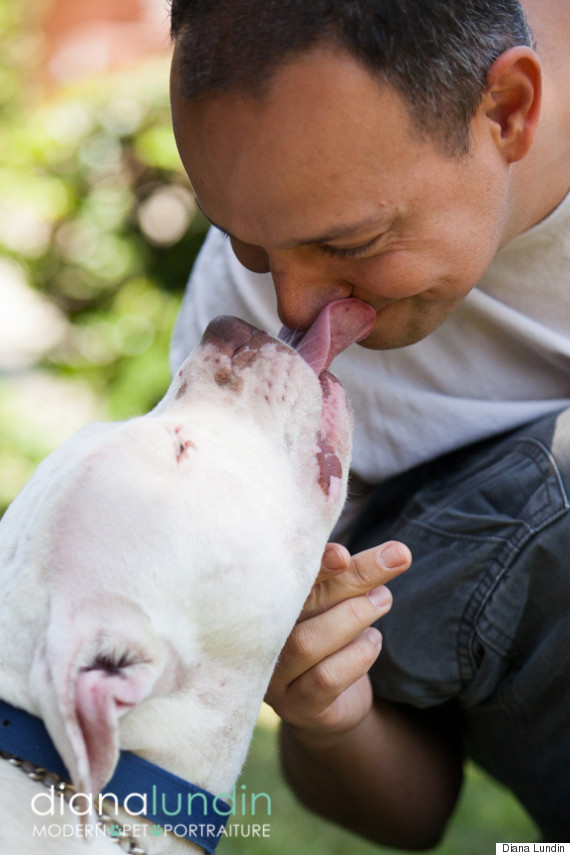 Thor is now living with a foster family organized by LA Animal Rescue. He is still looking for a forever home.

To find out how you can adopt Thor or other animals like him, visit the websites of Hope for Paws and LA Animal Rescue, or your local animal rescue group.

1 / 10
Doesn't Banning Pit Bulls Make People Safer?
Bans and restrictions on pit bull ownership are called "breed-specific legislation" -- and the studies that have looked at these laws find they <a href="http://www.americanbar.org/newsletter/publications/gp_solo_magazine_home/gp_solo_magazine_index/pitbull.html" target="_blank">don't make communities any safer</a>. Which stands to reason. For one, there's no evidence that pit bulls are, in fact, more dangerous than other dogs. And for another, breed identification is nearly impossible. After an attack, police and newspaper accounts rely on witnesses to accurately identify the attacking dog's breed, a task that studies have found <a href="http://www.maddiesfund.org/Documents/Resource%20Library/Incorrect%20Breed%20Identification%20Study%20Poster.pdf" target="_blank">even veterinarians and other animal care professionals can't do with much accuracy</a>. See if you're any better with <a href="http://www.pickthepit.com/" target="_blank">this online quiz</a>. The restrictions are also expensive -- the group Best Friends Animal Society has <a href="http://bestfriends.guerrillaeconomics.net/" target="_hplink">an online calculator</a> you can use to see how much breed-specific legislation costs. Enforcement of Miami's breed-specific legislation is said to <a href="http://bestfriends.guerrillaeconomics.net/report/a828288b-a0b2-495f-a882-1ab1f727d134/download?Name=BDL%20Data%20Tables&IsHandled=True&Format=0" target="_hplink">cost the city more than $600,000 per year</a>. A task force charged with examining a pit bull ban in Prince George's County -- in Maryland, just outside Washington, D.C. -- found enforcement of the ban cost $560,000 over two years, without any public safety benefits. Groups like the American Bar Association and the Centers for Disease Control have come out against breed-specific legislation. President Barack Obama, <a href="https://www.huffpost.com/entry/obama-breed-specific-legislation_n_3785911" target="_blank">in a statement</a>, said that these restrictions are "largely ineffective and often a waste of public resources." Community-based approaches to dog bite prevention are a preferred alternative.
http://www.petsadviser.com/Flickr