Pit bull lovers gathered at the U.S. Capitol on Saturday for a demonstration against "breed-specific legislation" -- laws that ban or otherwise restrict ownership of dogs by breed, most often aimed at pit bulls.

"Thank you for coming today," shouted comedian Rebecca Corry, who organized the Million Pibble March -- "pibble" being the affectionate name for pitties -- on behalf of her dog Angel, who'd been severely abused by a previous owner.

"Today we are sending the message to legislators on the federal, state and local levels that killing and banning the victim is not and never will be OK, or the answer," said Corry. "People trying to put an end to pit bull terriers live at a low level and need rescuing, too. Sadly, trying to reason with dumb is like asking a person with no arms to give you a hug."

On this hot day, the cheering crowd -- which Corry estimates was in the thousands -- embraced the message. Some exhibited their support with pro-pit t-shirts and placards. Brianna Creash, who'd driven to the march from New Jersey with her mother, showed off a big tattoo on her thigh of the family dog, 2.5-year-old Maggie. 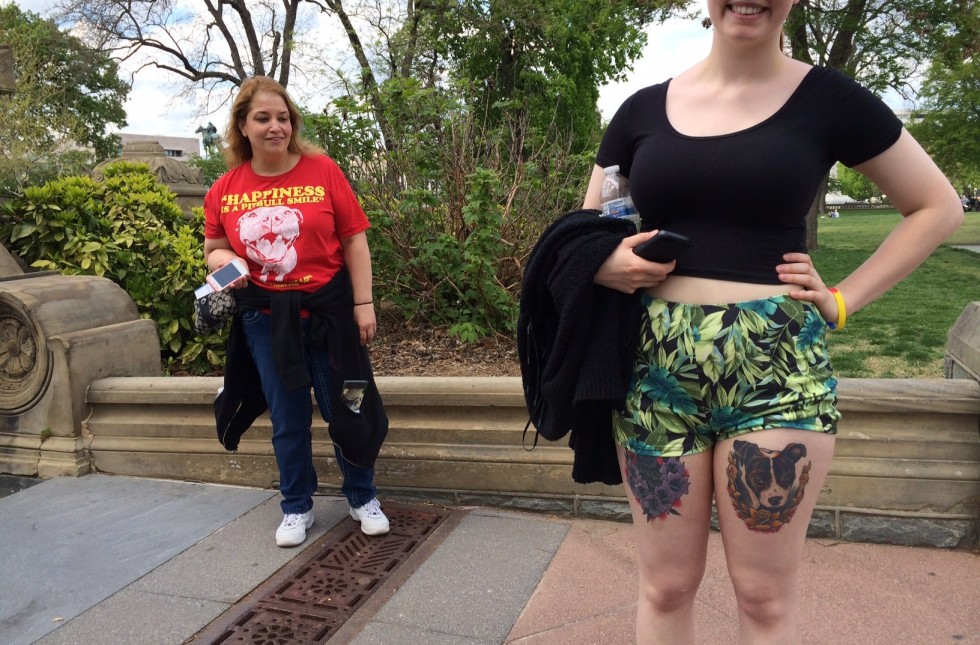 Maggie joined the family about two years ago, after Creash's stepfather found the dog eating garbage on the streets of Philadelphia.

"She literally jumped in the truck," said Creash.

"She came and sat next to him and never left," added her mom, Michelle Olk, who said that when Maggie first arrived, parents would drag their kids across the street when they saw her coming. These days, she said, kids come by the house asking, "'Can Maggie come out to play?'" 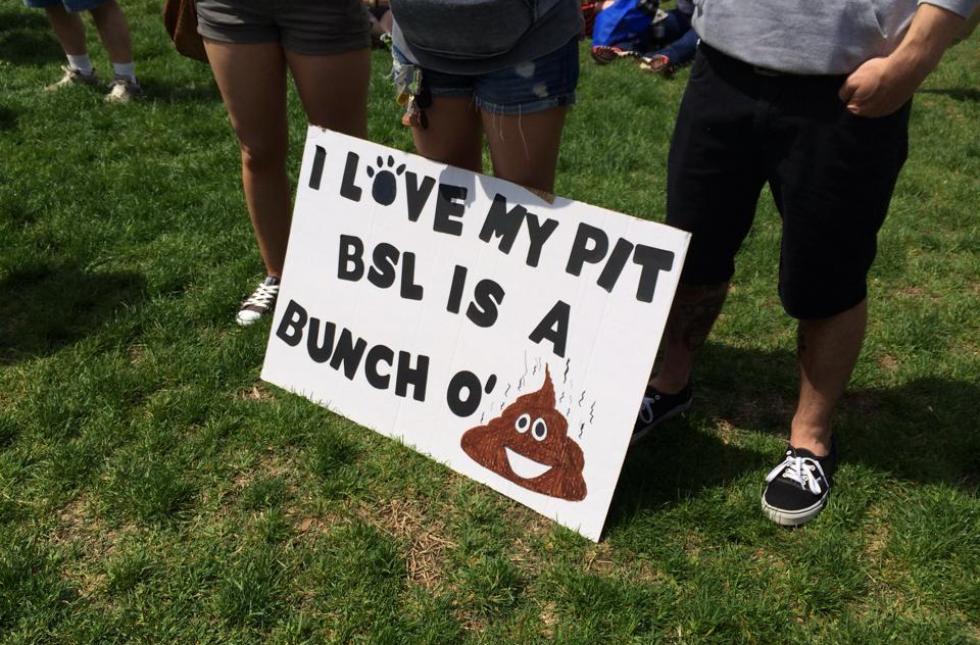 Onstage during the rally, speakers shared their stories: Jamie Buehrle, the wife of major league baseball player Mark Buehrle, spoke about living separately from her husband, since Toronto -- where he is a pitcher -- bans all pit bulls, including their friendly rescue dog Slater.

Police officer Kelly Steinhorn talked about her pit bull Pretzel, who'd been found in Baltimore with her throat slashed and open stab wounds in her chest.

"She was still damn friendly, sweet, and she was trying to lick all of us," said Steinhorn. "Proving that pit bulls are born inherently good." 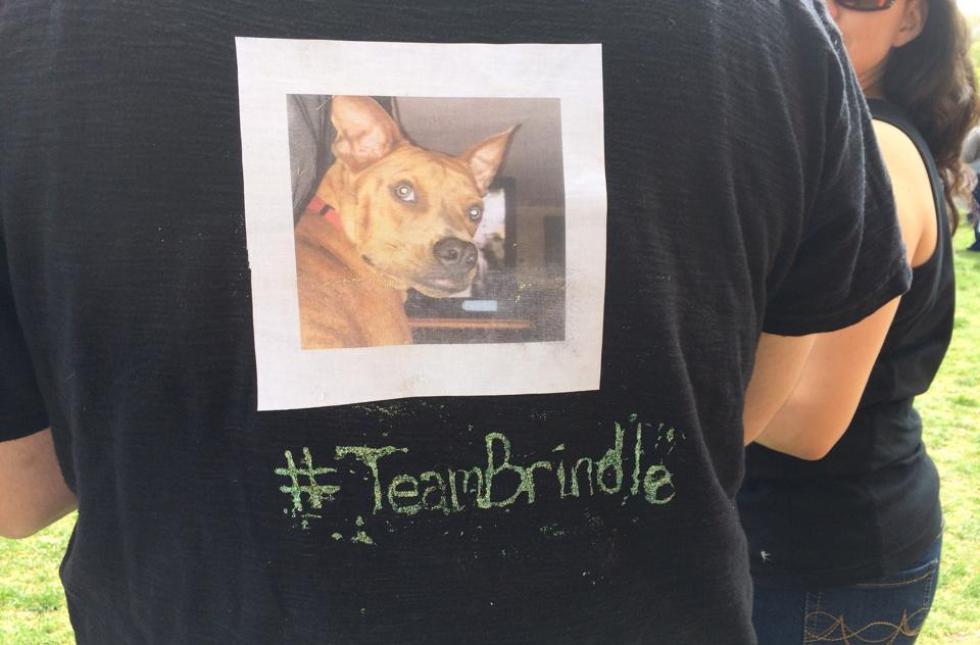 Roo Yori, the owner of Wallace -- a pit bull who was nearly euthanized, then became a champion athlete and the subject of a bestselling book -- said he thought things were getting better for these beleaguered dogs.

The message is getting out that breed restrictions are expensive to enforce without increasing public safety, so more places are getting rid of breed-specific legislation than adopting it, he said; and celebrities adopting pits are also helping to make Americans more comfortable with the dogs. Yori said he was glad to see the "progress," as supporters cheered.

The actor Chris Williams -- Vanessa Williams' younger brother, and the emcee of the event -- called out, "When I say pibbles, you say love. Pibbles!"

Love was in the air, and on the ground. Corry had decided early on not to allow any dogs at the rally, but a handful of attendees violated the breed-nonspecific rule -- and as might be expected in a crowd of mega-dog enthusiasts, the contraband canines were surrounded by people kneeling on the grass to pet them.

"Sure, he's a service dog," said the owner of Charlie, a handsome 80-pound pittie who didn't seem to mind the attention. "Maybe for today."

"I"m so grateful. You guys bring hope," Corry said, with the rally winding down. "I want to say at the nation's capital, I f*cking love you, Angel."

People wearing shirts with photos of their own pit bulls and logos from rescue groups stopped to pet two Chihuahuas -- they came from northern Virginia "to support their brother Kingston," said their owner Wendy Baltran -- and asked for pictures with pibble world celebrities: Jon Boyer, a handsome Baltimore cop known for his love of animals, who was spotted in a cat shirt at the dog rally; retired MMA fighter Gordon Shell, who has a longstanding challenge to Michael Vick to meet in an ultimate fighting cage; and Elle, a 5-year-old therapy dog who was named the 2013 American Hero Dog by the American Humane Association, and who seemed more worn out than did Shell or Boyer.

Leah Brewer, Elle's owner and herself a tireless champion for pits, greeted fans, and then walked her dog across the Capitol lawn to a shadier spot. Stopping for a moment, she and Elle were swarmed again.

"We have to keep walking," she said, which was, maybe, the very best evidence that all this outreach is really working.

CORRECTION: A previous version of this piece misquoted Corry during her speech. The piece has been updated with a corrected quote. You can watch the speech in full on YouTube.