This pair of pit bulls will gladly ham it up, in exchange for biscuits.

"Sookie and Ivy love to wrestle so sometimes I dress them up while they play," says their adoptive mom, Jannina Laaksonen. "Neither of them mind being dressed up. I always make it a fun experience with lots of rewarding treats!"

Laaksonen, who recently moved to Rockport, Massachusetts, to live with her fiance, spends time concocting new mise-en-scènes for the dogs and sharing the results on Facebook, YouTube and Instagram. A post from last year, for example, features a video of the pups "reenacting" a scene from "Jurassic Park."

She says she hopes that people who admire how cute Sookie and Ivy are will decide to rescue a pet of their own. Perhaps even a dog as blocky-headed as these two.

"I try to catch photos that portray them in a goofy, fun way. Through sharing photos and videos, we’ve had people tell us that they’ve grown to love and adore pit bull dogs," Laaksonen says.

And who could blame them?

Ivy's football costume. We could watch these all day. In fact, we might do just that today.

Lately, the pups have been posing with dollhouse miniatures on their big, sweet faces.

... as well as engaging in all sorts of schmoopiness:

Indeed Ivy, as you may have guessed, is "a major attention hog." "She is very funny, and she loves the camera," Laaksonen says.

Sookie's interests in film, meanwhile, are a little more behind-the-scenes.

"She really likes to watch TV and she will bark when she wants the channel changed. She will bark at the TV if it’s not on so someone will turn it on for her," says Laaksonen.

Combined, it seems these dogs have a vision.

"When I do dress them up, I let them play for one to two minutes while I stand back and film. They direct their own videos," she says.

But Sookie and Ivy were not always the healthy, costume-wearing goofball auteurs you see before you now.

Sookie was 8 months old when Laaksonen -- then a college student living in Orlando, Florida -- adopted her from a local animal shelter. She'd been given up by her former owners, it's thought, "because the previous family had a baby and the child was allergic to her," Laaksonen says. "I had no experience with bully breeds prior to Sookie, and she taught me how amazing and misunderstood they are."

"I was looking at the adoptable dogs on Orange County Animal Services’ website when I saw her heartbreaking kennel card photo," says Laaksonen.

The dog was severely underweight and had a wound on her neck, "likely from an embedded collar," she says.

Laaksonen wasn't in the market for another dog at the time, but "I had already named her in my head, and once you name something, you’re attached," she says. "When I finally got to meet her, she laid down on my feet and I knew she was coming home with me." 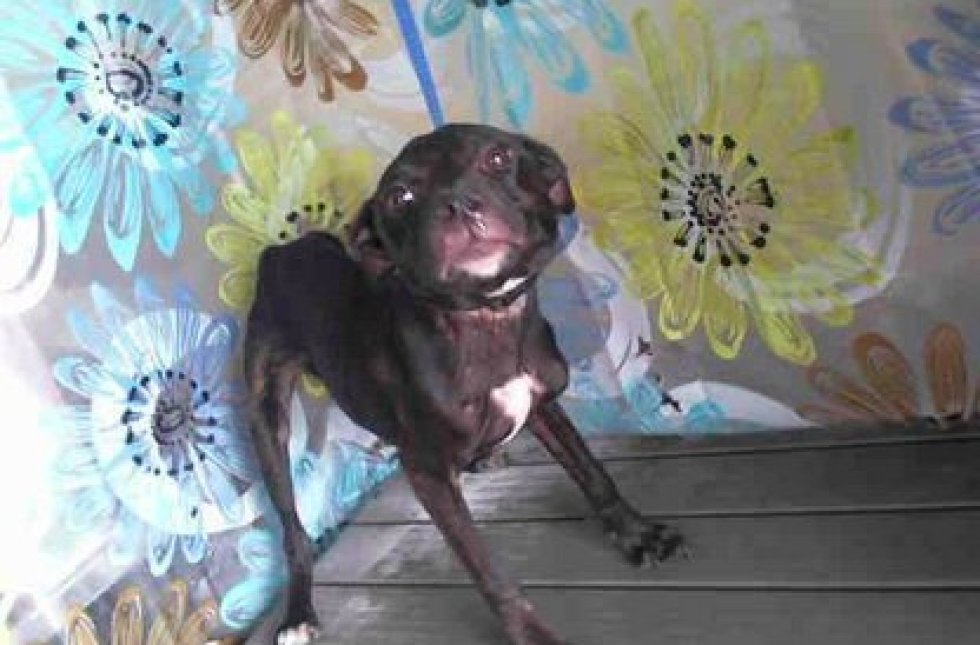 The experience of bringing these pups in has been transformative -- and not just for the dogs, who went from being homeless to romping around in dinosaur costumes and eating peanut butter for a living.

"My dogs have made me passionate about the pit bull breeds and animal adoption, and they have opened my eyes to animal rescue," Laaksonen says. "They both picked me. I had no say in the matter."