My dog Murray and I were taking our usual amble through town the other day, when we came upon a puppy we hadn't seen before. I don't know a lot of my human neighbors, but I've got a pretty comprehensive roster of all the dogs around town. We stopped to get to know this little golden bundle of wiggles, but her owner snatched her off.

"I don't want her playing with pit bulls," he said to me, dragging the puppy away.

1. It is truly astonishing how many otherwise progressive people consider their prejudice against pit bulls to be perfectly reasonable, when the data shows it isn't; and

2. Given that Murray isn't even actually a pit bull, this encounter highlights one of the major reasons that prejudice against pit bulls is extremely problematic: it's really hard to tell which mixed-breed dogs are even actually pits.

Pit bulls are subjected to an almost unimaginably cruel world, in which they are subjected to every kind of violence -- and then, at the end of it, are euthanized in shelters at shockingly high rates, because families are afraid to bring them home, landlords won't rent to the families who do bring them home and localities impose restrictions on their ownership, despite ample evidence that these restrictions do nothing to improve public safety.

The newest comprehensive examination of dog bite statistics, put out in December by the Journal of the American Veterinary Medical Association, looked at what factors tended to lead to fatal dog bites. These include a dog not being spayed or neutered, dogs being "kept isolated from regular positive human interactions," away from the rest of the family, and dog owners having histories of abusing their pets.

Some pit bulls bite, of course, just like some of any breed of dog will bite. And the media may be more likely to report a pit bull's bite, or the person bitten may be more likely to think the dog that bit them is a pit. What the JAVMA study shows, though, is that breed is specifically found not to be a factor in the likelihood of a fatal dog bite.

Yes, some old studies show that pit bulls are more likely to bite than other dogs. But those studies have been debunked on a number of grounds -- a big one being that, without genetic testing, which is almost never done, it's very nearly impossible to pick out which dogs are actually pit bulls. Here, try for yourself.

I still understand why you might be scared of pit bulls and pit bull type dogs. These are the vast majority of dogs identified by the media, shelters and nearly everyone as pit bulls: they're dogs that look like pits -- they've got the blocky heads, for example -- but we don't actually know their actual genetic makeup.

Even Alter notes that the CDC, which conducted the most-cited older study, no longer collects statistics about which breeds are involved with dog bites. What she doesn't note is that the lead author of the CDC study is one of the researchers responsible for the more recent JAVMA report, which more or less does in the earlier report.

In the Time piece -- which was prompted by what can only be described as a horrific attack on a little girl, by three of her grandfather's dogs; the girl was then kicked out of a KFC because her damaged face was disturbing the other customers (SEE UPDATE BELOW) -- Alter acknowledges that she hasn't included any information from pit bull advocates, writing that "many pit-bull advocacy organizations, including BAD RAP, did not want to comment for this story."

Some of them were eager to tell me their thoughts.

Here's Scotland Haisley, founder of the Animal Rescue Corps, who has worked in animal welfare for 25 years, is responsible for rehabilitating 11 of the worst-off dogs rescued from Michael Vick's Bad Newz Kennels, and actually rescued dogs from New Orleans after Hurricane Katrina:

The prevalence of incomplete information, inaccurate statistics and unsubstantiated theories has created a widespread prejudice against the pit bull type dog and only perpetuates the stereotype that aggressive behavior in dogs is a breed-specific problem.

Public wellbeing is compromised and innocent lives pay the price when legislation wrongly incriminates a majority due to the actions of unaccountable and thoughtless individuals. Breed specific legislation is reactive, ineffective, and fails to make accountable those truly responsible. Solutions must be proactive and strike at the root of the problem, preventing the potential for dangerous situations to occur by promoting responsible pet guardianship, providing mandates and resources for spay/neuter of all companion animals, and properly staffing and funding those agencies charged with keeping our communities safe and managing homeless animal issues.

Here's the more-colorful comedian Rebecca Corry, whose own dog, Angel, was abused by previous owners, and who organized the recent pit bull march on Washington -- called the One Million Pibble March, pibbles being the affectionate term for pits:

Next they'll say pibbles are responsible for world hunger and global warming. I would like the "reporter" to look [at] Angel (a rescued pit bull who was horribly disfigured and abused for many years) or any of the millions of abused and/or euthanized pibbles killed daily, in the eye and tell them "they are the problem." If the breed is the problem then perhaps this "reporter" and [anti-pit bull activist Colleen] Lynn, can snuggle all night long with the human monsters that abused these dogs, the inherently dangerous and sociopathic killers. Sound like fun ladies? Errrrr....

And Ledy VanKavage, senior legislative attorney for Best Friends Animal Society, a group that prevailed against PETA and others who argued in 2008 that the Michael Vick couldn't be rehabilitated:

Some of the statistics cited in the Time article have been disproved by more recent research done by Dr. Gary Patronek, and a team of researchers who analyzed fatal dog-related incidents from 2000-2009 and found that breed was not a factor. Indeed breed could only be identified in 18% of the cases and a variety of breeds of dogs were involved. The focus should be on the behavior of the dog and the behavior of the owner. Period. Reckless owners should be prohibited from owning any breed of dog. Innocent dogs shouldn't be penalized for being born into a certain breed. All dogs are individuals.

Amiee Stubbs, a Nashville photographer and animal advocate, said she'd been "so worried" ever since she "saw that a pit bull attack was the reason the girl in KFC had been injured":

In my work as the photojournalist for Animal Rescue Corps, I have been on the scene as we rescued over 60 pit bulls from two dog fighting operations. Every single one of those emaciated and abused dogs greeted rescuers with affection, tails wagging. Additionally, as a pet photographer, I have photographed hundreds of pit bulls. In all of my experience, none of these pit bulls showed any aggression toward people. If the Time magazine article was accurate, this would not be the case. The problem is not the pit bulls, nor is it specific to any one breed.

The problem is that there is little consequence for being an irresponsible dog owner. Journalists giving credence to questionable statistics and sources just exacerbates the problem.

Retired MMA fighter-cum-pit bull advocate Gordon Shell -- who stars in a documentary about his work for Detroit's abused pits -- asked why the Time story didn't mention the Vick dogs who "were rehabbed and rehomed to become loving family pets?"

While the media continues to dig for blood filled stories, myself and thousands of other advocates will keep doing what we do to protect this misrepresented breed, we will eventually win this fight and the Mike Vick legacy will eventually fade just like his mediocre football career.

Spencer Lund, who runs an Oregon insurance agency that is specifically aimed at pit bull owners, and is a pit bull owner himself, told he me has "a dream that one day this nation will rise up and live out the true meaning of its creed: 'We hold these truths to be self-evident, that all dogs are created equal.'"

And Leah Brewer, owner of the Elle the pit bull -- a formerly abused, now-therapy dog who was named the 2013 American Hero Dog by the American Humane Society, sent me this photo of her beloved Elle. I think it pretty clearly shows that pits can be as loving, and goofy, as any other kind of dog. Or maybe even a little bit more, given their propensity for playing dress-up: 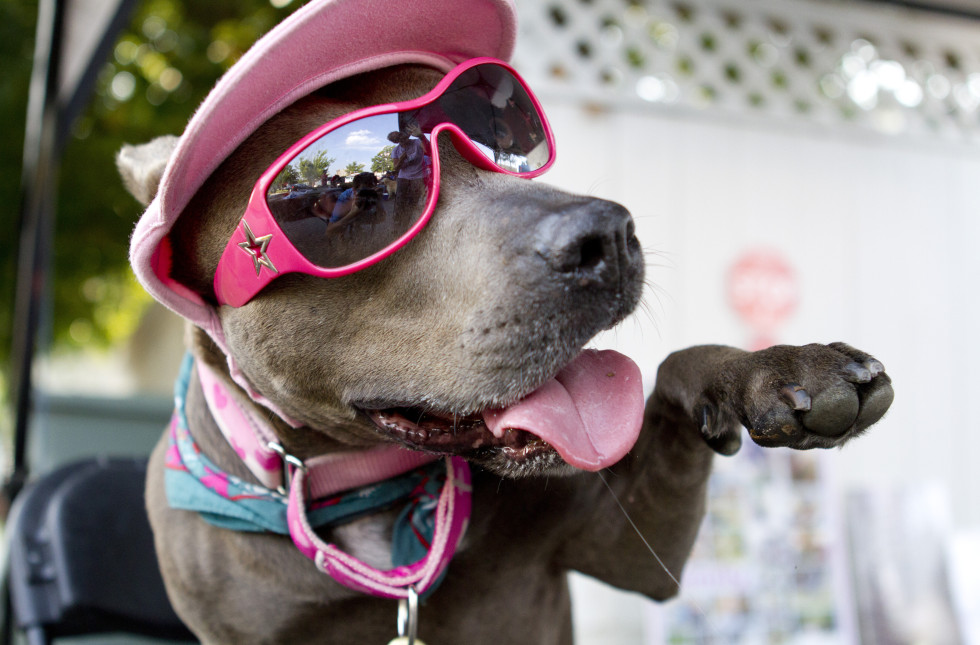 We all want there to be fewer dog bites. The evidence shows that blaming pits isn't the way to get that.

Let's stop barking up the wrong tree, and look instead at the factors that actually matter here -- like spaying and neutering, and treating animals like they're part of the family instead of keeping them isolated outside. We should also make more effort to teach kids about dogs, and use more visual cues, like yellow leashes, that'll let people identify dogs who don't like being petted.

This seems more productive than working people into a lather over a group of dogs who can't help what they look like or what's been done to them, and who aren't in the end any inherently different from their sleeker-headed fellow canines.

By the way: Murray, my sweet baby, is a rescue, so -- as my husband puts it, possibly plagiarizing Dave Barry -- he's the result of many generations of unregulated dog sex. The group we got him from listed Murray as a border collie, which -- given that he's never, ever, herded anything -- is the only kind of dog we're sure he's not.

We've never had him genetic tested, and we don't know for sure what kind of dog he affirmatively is. Part pointer, maybe. Or possibly part Lab.

Or maybe he is part pit bull, even. Our neighbor hates him based on nothing more than the shape of his face, after all. And he does look so very good in hats. 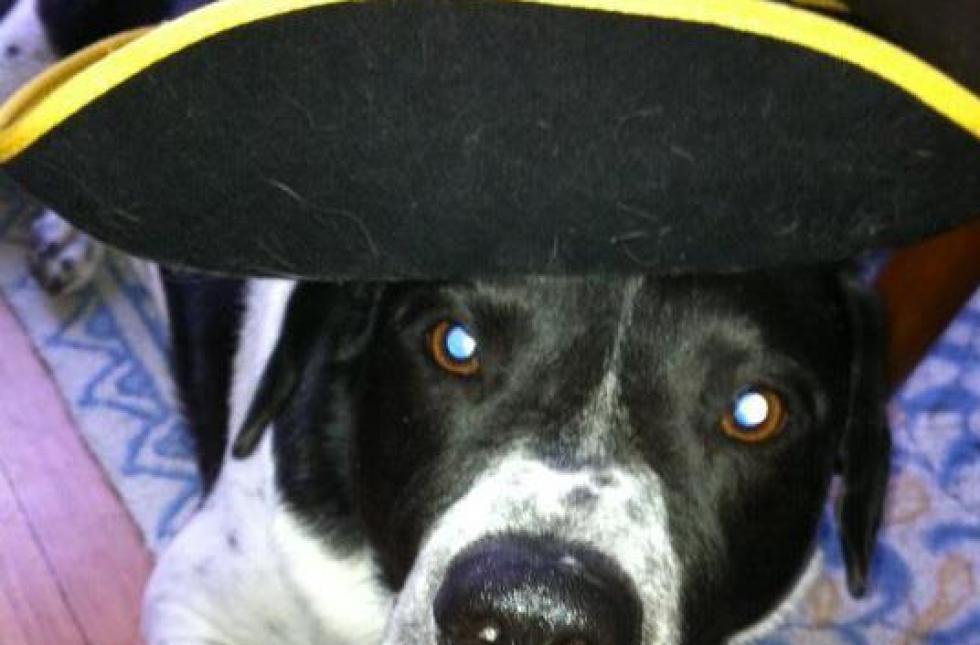 UPDATE: KFC now says the story that prompted the Time piece -- about the little girl who was attacked by her grandfather's dogs, then kicked out of KFC because her injuries upset the other customers -- was a hoax.

Here's Time's own reporting on the new developments:

The bizarre story concerns three-year-old Victoria Wilcher, who was reportedly mauled by pitbulls belonging to her family, leaving heavy scarring on her face. Her family said last month that she was asked to leave a Jackson, Miss., KFC restaurant because her appearance disturbed other customers. That claim, initially floated on a "Victoria's Victories" Facebook page that appeared to have been taken offline Tuesday, ignited outrage on social media, prompting an apology from KFC on June 15 and a promise to spend $30,000 on Wilcher's medical bills.

But KFC said Tuesday that it no longer believes the incident actually took place.

"Like the rest of America, the KFC family has been moved by the story of Victoria's injuries and recovery," KFC spokesman Rick Maynard said. "After the alleged incident was reported to us, two investigations took place, including one by an independent investigator. Neither revealed any evidence that the incident occurred and we consider the investigation closed. We are honoring our commitment to make a $30,000 donation to assist with Victoria's medical bills. We hope everyone keeps Victoria in their thoughts and prayers. She will certainly be in ours."