Norwegian Cruise, the third largest cruise line, is intent on giving market leaders Carnival and Royal Caribbean a run for the competitive market share of passenger money by adding the newest cruise ship in the world to its 14-vessel fleet.

This week it took possession of the 4,200-passenger Norwegian Escape, the biggest ship in the history of its fleet--but only the fifth largest in the world, behind Royal Caribbean's gigantic Oasis and Quantum-class ships.

The 164,000-ton Norwegian Escape was built by Meyer Werft in Germany and took just over a year to complete. According to Meyer, the Escape is the most advanced cruise ship in the world, featuring the world's largest water park and ropes obstacle course at sea. NCL is keeping Meyer really busy building several more ships for 2016 and 2017, including one specifically for the Chinese market. 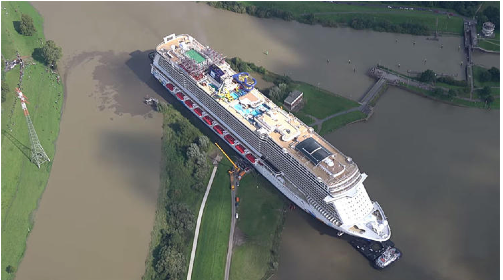 The Port of Miami will be the Escape's home port, where it will set sail weekly on seven-night Caribbean cruises. NCL has made certain the Escape will reflect plenty of Miami's signature style influences. For starters, recording artist Pitbull has been selected as the Escape's official "godfather" and is scheduled to christen the Escape's maiden voyage on November 9th.

In addition to Pitbull, the Escape's dining and drinking options will also feature a strong Miami influence, including the first Jimmy Buffet Margaritaville at Sea, a replica of the iconic Miami blues club Tobacco Road, and restaurants run by the owners of the highly successful South Beach restaurants The Pubbelly Gastro Pubs.

Other notable features of the ship include the largest water park at sea, the largest ropes course at sea, a spa with a snow room, and Tony Award-winning musical productions of Million Dollar Quartet and After Midnight, as well as an ode to '80s films by director John Hughes, like The Breakfast Club.

As a lawyer who investigates passenger cruise ship accidents, I hope that in the hurry to keep building bigger and more exciting vessels, NCL has also made passenger safety the primary focus by designing decks with slip-resistant surfaces and clearly marking thresholds with adequate warnings and lighting. Bigger is not necessarily better if it is not safer.