I'm not much into reality TV shows; my own reality feels sufficiently weighty most days that I don't need to go poking my nose into other people's dramas. And while I faithfully watch HBO's "Girls," I do that somewhat out of professional obligation: I work in a newsroom of 20-somethings and I don't like to be excluded from the conversation.

Just about my only true appointment TV these days is with Tia Maria Torres, the tough-as-nails star of "Pit Bulls and Parolees," which appears on the Animal Planet (the season finale is this weekend). Why am I such a loyal viewer? Because it's a show all about forgiveness, acceptance, resiliency and moving on. That, and I'm a sucker for the underdog winning and happy endings, however predictable they may be.

The basic premise of the show is this: pit bulls and parolees both need second chances and Torres gives it to them. The 49-year-old mother of multi-tattooed adult children is the founder and owner of the Villalobos Rescue Center -- the country's largest rescue facility for pit bulls -- now located in New Orleans (the poster child for cities in need of second chances). Torres hires ex-cons to staff the place and periodically gets business advice from her husband, who is currently incarcerated somewhere in California.

Torres told the Huffington Post that she's been a dog lover since childhood. Raised by her step-mother after her father left, her stepmom's love of animals "just wore off on me," she said. She was taught that the animals came first. In raising her own kids, Christmas morning meant you deferred opening the gifts under the tree until all the animals were fed. Going by the show, her kids are right there with her.

As for pit bulls, well, Torres says they aren't for everyone. They can be loyal family pets and highly adaptable to living situations. But they can be animal aggressive too. "It's the breed. People don't do their research." Her show certainly helps to educate the public with a mix of human and canine drama.

Each week, there is another pit bull in trouble somewhere -- dumped on a freeway and left to die; tied up and abandoned in a vacant lot in the broiling heat; used by a backyard breeder as a bait dog and injured within a breath of its life. The Villalobos team hops in their white truck and dashes off across state lines (one of Torres' beefs is that her parolees often can't leave the state to accompany her) to save it. While the dog may seem fearful, drooling and snarling during the rescue attempt, once safely back at Villalobos, viewers see a parolee bonding with it and the next thing you know, the dog is rolling on its back and asking for tummy rubs.

Torres regularly comments on the resiliency of the breed she rescues. These dogs move on from the abuse they suffered and find a way to trust again. As for the parolees, they all seem to have turned a new leaf after paying their debts to society (at least the ones who get on TV). Torres likely hand-picks them since, unlike every inmate I've ever interviewed, not one ex-con on the show has ever proclaimed a wrongful conviction. These guys all man-up to what they've done in the past and just ask that they be allowed to move on from it. Fair enough, I say.

I love the idea of forgiveness and second chances. Why not? Who among us doesn't have regrets -- bad choices, bad behavior, bad baggage that we still carry? And who wouldn't be better off if life didn't allow us the occasional do-over?

But there is an element of "Pit Bulls And Parolees" that resonates even louder with me -- that old saw about today being the first day of the rest of your life. It's one of those trite-but-true sayings that feels even too corny and dated for Facebook. Yet so many of us waste time blaming the past for our present. Why aren't we all looking forward, or at least trying to? With apologies to all the therapists in the world, there isn't a whole lot any of us can do to erase what came before; all you can do is accept that it happened, forgive the bastards and move on. Instead, we choose to drag our chains through the mud. I don't get it myself.

Midlife is the perfect time of life for those of us who are deadline-driven. While the sand in our hourglasses isn't in imminent danger of running out, most of us realize that our time no longer feels unlimited. It's today or never to determine how we spend the next chapters. Personally, I try not to dwell on my "what ifs" -- except for a recent one that keeps nagging at me. I'm offering up this column as a way to make things right.

You see, a few months ago, I met a pit bull named Sally at a Los Angeles County animal shelter. She was so terrifying looking that the staff kept her in a trailer office far away from the public -- something that certainly didn't enhance her chances for adoption. A volunteer broke protocol and brought me in to meet Sally. She was about as sweet as they come, showering my daughter and me with sloppy kisses. Having just adopted a death-row shelter dog two weeks earlier, there was no more room at my inn, so we slipped Sally a few treats and left her there. I convinced myself that she was enough of a shelter favorite that one of the volunteers would get her to a breed rescue group. As we were walking away, I stole one final look at her over my shoulder and I knew I was delusional. I kept walking anyway.

Sally, I am so very sorry. You deserved better than me that day. I know I can't rescue every dog, but maybe I can convince some of my readers to rescue some of them. Do it for Sally. And for Sally's sake, don't let the Westminister Kennel Club show send you running to fancy breeders instead of hitting your local animal shelters. If there's no room at your inn, maybe sponsor one of these Villalobos dogs.

Pit Bulls, Parolees And Me
Pitbulls Of 'Pit bulls And Parolees' 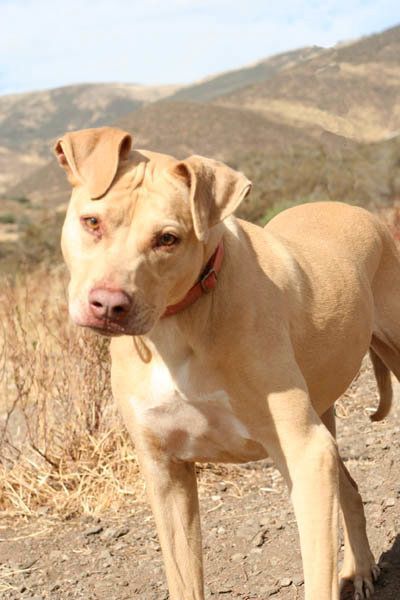 1 / 5
Twinkie
Twinkie is one of the pit bulls featured in Animal Planet's show "Pit bulls and Parolees."
Photo Courtesy of Jared Albert