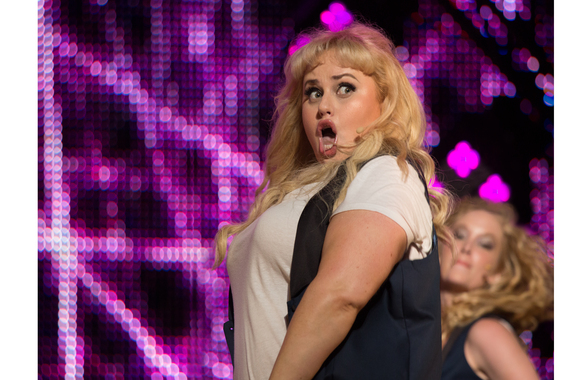 The low-costing original Pitch took in $113,042,075 worldwide on a production budget of $17 million, which deemed it the second highest grossing comedy/musical since 1984, losing the top spot only to School of Rock (2003). No wonder there is a follow-up.

The semi-sad result is that although Pitch 2 is mostly painless, with several fine musical numbers, especially Snoop Dogg's Christmas duet with Anna Kendrick's Beta, the dialogue voiced between the often agreeable a cappella chorals seldom rises above the lame. "I'd like to be the brisket in that man sandwich" is possibly passable. "The air we're breathing now is 90% fart" isn't. "Fart" also appears as a password to get into a party of sorts, but it must be accompanied by a fart sound. Blame screenwriter Kay Cannon, whose efforts for 30 Rock were on a whole other level. She also wrote for Saturday Night Live, but since half of the skits of almost every segment of that program misfire, one know not whether to praise or demean her efforts there. 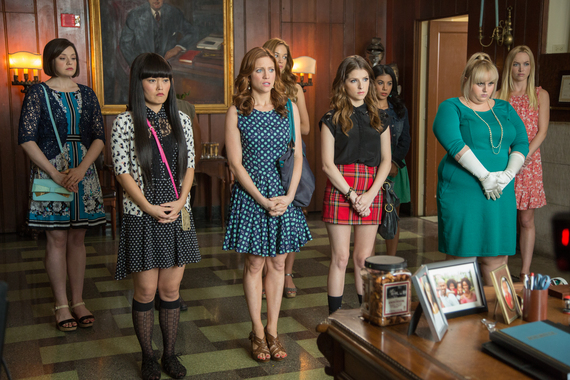 The film begins with the award-winning group, the Barden Bellas, performing in Washington, D.C., for the President and the First Lady. Yes, Michelle and mate make actual cameos. Near the end of the all-girls' routine, which was going rather fine, the hefty Fat Amy (Rebel Wilson) is lowered from the ceiling as she sings Miley Cyrus's "Wrecking Ball." Suddenly, Amy's tights rip. Oh, no! She's not wearing undies. Her privates exposed midair cause the Obamas to frown, then quickly go viral, and suddenly Amy's the proud possessor of the world's most famous vagina.

This debacle causes the whole group to lose their standing, not only on the a cappella circuit but also on campus. Clearly, the only way to regain their aura of success is by winning the World Championships being held in Copenhagen.

There is little drama along the way since you can already guess the ending unless you've never been to a film before. But what's baffling here for a film directed by a woman, Elizabeth Banks, and written by a woman (Cannon), is that each female character is reduced to a single stereotype. The Asian girl speaks very quietly. The black, semi-butch lesbian can hardly control her sexual urges. As for the Guatemalan lass, she sees her future as being deported after she graduates and then drowning when she tries to smuggle herself back on a boat. Told in a deadpan manner, this is supposed to be very funny. Tell that to the relatives of all the thousands of folks who have died recently in just such a manner. Additionally, Rebel Wilson's Fat Amy's humor stems completely from her being overweight and buffoonish. I doubt making the obese girl the class clown is really the way to breakdown body biases. 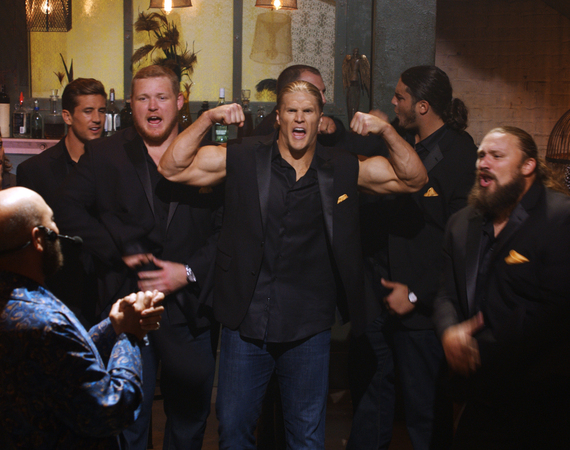 Worse, the two broadcasters portrayed by Banks (Gail) and John Michael Higgins (John) spout 1950's intolerant commentary nonstop during every a cappella contest. Their "jokes" are racist, misanthropic, plain cruel, but mostly wonkish. An example, after a mishap, John opines: "This is what happens when you send girls to college." Clearly, Cannon desires to show the ridiculousness of being an anti-feminist. However, her targets often seem dated, and her one-liners frequently are barely groaners.

On the plus side, several of the female characters are bright, all are talented, and their body parts aren't fetishized. Still, seldom does the singing, the choreography, or the plot even come close to a prime episode of Glee.

Yet if you are a young woman, possibly in the age bracket of 12 to 16, you might just have a grand old time with these festivities. There are laughs, catchy tunes, and Anna Kendrick. Avengers: Age of Ultron can't boast that.