The Pitchfork Music Festival was in high gear Saturday, packed with artists comprising the heaviest of the weekend's performances -- and lots of screaming.

Ear plugs were a must for most of Saturday when the likes of The Swans, Savages and The Breeders took the noise to tinnitus-inducing levels. All the bands on the darker side of the rock spectrum shredded and screamed under the (still hot!) sun until Solange cooled things off her exuberant early-evening grooves.

Here's our roundup of Saturday's highlights (story continues after the slideshow):

All photos by Justin Barbin unless otherwise noted.

Phosphorescent was among the few poppier, harmonious acts amid a day packed with screamers. Noodle-y electronic burts gave their mellow songs a jolt of psych-summer jamminess -- all to great effect -- while songs like "Nothing Was Stolen" ranked among the day's finest examples of vocal harmonies. Perhaps knowing Saturday would have such moments in short supply, the band capped off their set with an a capella ending to serve up a perfect, completely non-cheesy sing-a-long moment. - K.B.

My day started with seeing most of Phosphorescent's set on the Green Stage. The Alabama-born indie folker brought a breezy, carefree vibe to the early part of a Saturday that was much cooler than the sweltering weather that hampered day one of the fest. Considering the success of less engaging acts with a somewhat similar sound (i.e. the Lumineers, Mumford & Sons), Matthew Houck is a name you'll want to remember. Meanwhile, over on the Blue Stage, Brooklyn punkers Parquet Courts brought the volume and helped contribute to the noisier spirit of the festival's second day. - J.E.

Sometimes raucous, sometimes sounding a lot like indie power pop kings, Pavement, Parquet Courts were among Saturday's show-stealers. The Brooklyn outfit was hard charging and relentless, ripping through "Stoned And Starving" with explosive riffs and tight rhythms. There was a twang and cohesion that gave the band a country band flair at times (don't worry, that's a good thing), but lest anyone be confused, Andrew Savage was there to bark out lyrics skewering the commercialism of rock and roll. - K.B.

Much like Cold Cave's set on the same stage at this festival two years, it was a little bizarre to see goth-adjacent post-punk group Savages in action in the hot, mid-afternoon sun. Clad in all black, the women of Savages unleashed their ferocious jams on a large crowd and lived up to the high expectations preceding their appearance. Jehnny Beth's howl sent shivers down my spine and it was enthralling to watch them thrive away from their shadowy aesthetic. They're the real deal. -J.E.

The most difficult part of the Savages set was deciding which band member I wanted to be more; there wasn't a single thing was any but kickass about the British post-punkers. Intense drumming (that may have caught a Pitchfork soundboard worker off guard, given the too-low levels) helped lure the crowd under what was the day's most oven-roasted feeling performance. Lead singer Jehnny Beth, rocking head-to-toe black with fierce-looking pumps, kept an excellent sneer perma-plastered on her pale face. Sure, their song "F***ers" may be a little on the juvy side, content-wise, but the galloping, tensing guitar buildup was so rich, Beth could have been talking in tongues for all we cared. - K.B.

I think METZ are the most endearing punk band currently on the scene. Not only do they rock full-force ahead, but they are super polite and very Canadian about all of it, making their sound very accessible but still raging. Though their performance lacked both some of the raw energy of the Savages set preceding it as well as their headlining show at Lincoln Hall a few months earlier, but their Blue Stage set, especially songs like "Headache" and "Wet Blanket." -J.," still really rocked.

^ Co-signed on the adorable politeness of METZ. Despite that (ever heard a heavy metal band say thank you that politely? It's adorable), the relentless scream-thrash combo secured METZ's position as the closest thing to heavy metal Pitchfork trotted in this year. Unlike their black-clad counterparts in Savages, METZ went with all-white, and sand like a more brutish dude version of the women of Savages. During "Rats," fans threw together an impressive mosh pit because, well...how could you not? - K.B.

The Breeders playing "Last Splash." I don't have anything to add except that I cried to "Do You Love Me Now." It wasn't the last time I was moved to tears on +Saturday. Though I could have used louder vocals sound-wise, it was heavenly. -J.E.

To everyone's delight, Kim Deal and company launched into "Cannonball" early on in their set of playing an out-of-sequence "Last Splash" in its entirely. Clocking in at just under 40 minutes, The Breeders covered their seminal album and tucked in some equally excellent fan favorites to boot, including a smashing cover of Guided by Voices' "Shocker in Gloomtown." My teen self was going nuts on the inside. - K.B.

Solange was absolutely transcendent on the Red Stage. Bringing a Stevie Wonder-esque feel-good vibes to the festival's second day. From "Losing You" to her Dirty Projectors cover ("Stillness Is The Move") to her oldie-but-a-goodie "Sandcastle Disco," it was perfection. Definitely the set of the day, if not the fest to this point. -J.E.

Funky, '70s bass and some teasingly misleading intro riffs (on several occasions I thought we were getting Michael Jackson or Staples Singers covers) helped vault Solange's early evening set to one of the day's most splendid. While enthusiasm was rampant Saturday, most of it was aggro while Solange's was joyous. "Locked In Closets" got the crowd ready for the moment when --as her older sister would say, "Put your hands up!" -- "Losing You" prompted a sea of hands to lift skyward. Whispers that the Obama daughters were hanging out for Solange panned out to be nothing more than rumor, but no matter: Solange was the only act to totally warrant colorful beach balls and non-ironic handclapping. - K.B.

Belle And Sebastian could not stop pulling excited -- and rain-soaked -- fans from the crowd. The Scottish propagators of "Sad Bastard" music managed to avoid most of their meloncholy hits in favor upbeat tunes that seemed to spark a wave of good feeling and '90s nostalgia in everyone (myself included). Dissolve staffer and former A.V. Club writer Scott Tobias probably said it best when he tweeted, "Belle & Sebastian came alive for me on stage in a way they never did on record. Must reassess dubious opinion of them from 15 yrs. ago." Indeed, they hyped the crowd with "The Boy With The Arab Strap," "If You're Feeling Sinister" and a post-rainstorm encore of "Get Me Away From Here I'm Dying." Stuart Murdoch, who has one of the most distinctive voices in indie rock, rattled on about Chicago, Divvy bikes and how great it was to be in Chicago. Despite the rain, the crowd seemed to have mutual feelings for Belle And Sebastian. - K.B. 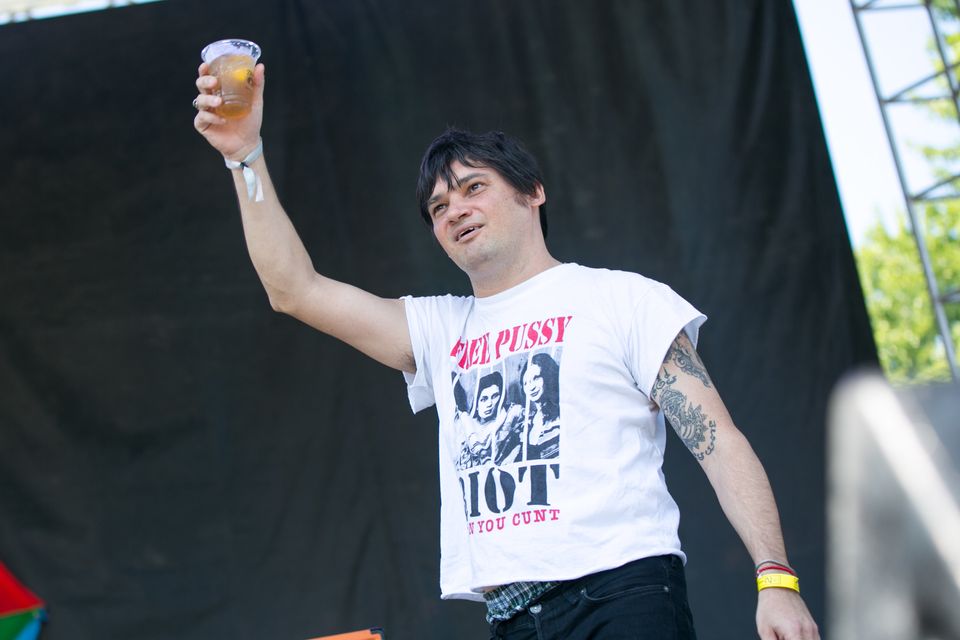 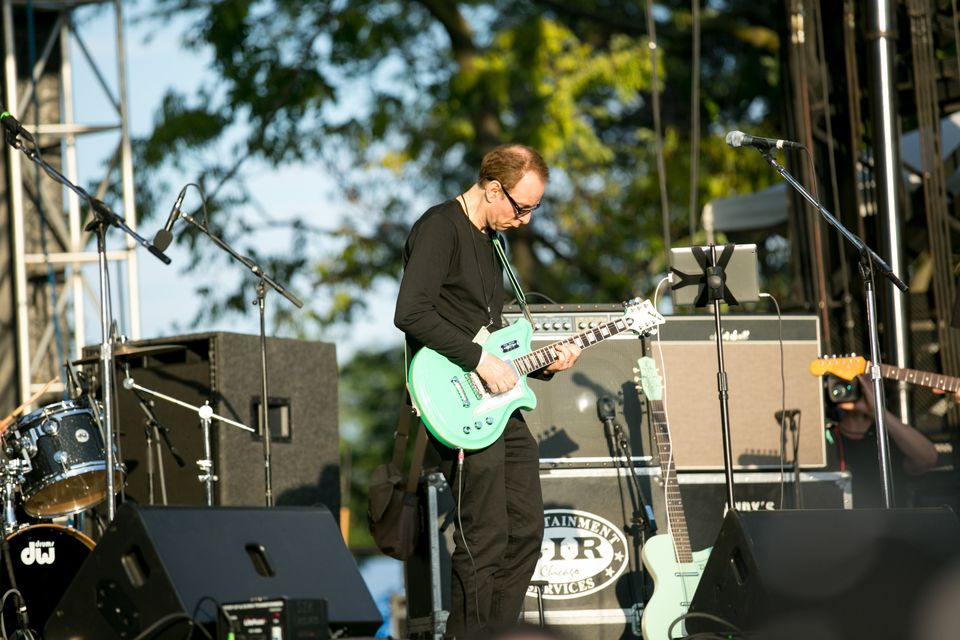