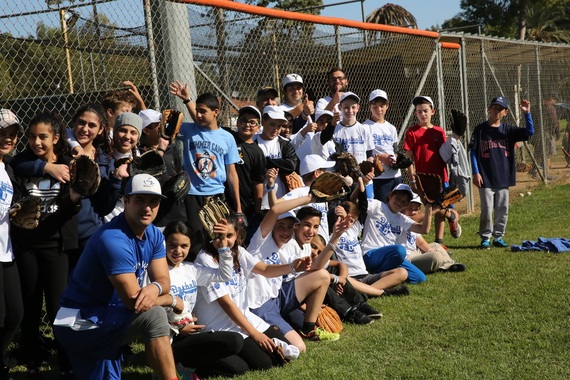 Photo Credit: Yossi Zamir / Israel's Baseball Le'Kulam program brought together a group of Arab and Jewish kids who learned to play baseball together.

It's a warm Friday morning as a troupe of ball players walk onto the field looking relaxed with their baseball gloves and bats. The smell of freshly mowed grass lingers in the air with the sun's rays lighting up the players' faces. They divide up into four teams: the Pirates, Yankees, Giants and Red Sox. The games are punctuated by occasional bouts of laughter and encouraging words and tips from the coaches at hand.

Compared to the professional baseball franchise of North America that stretches from coast to coast, the baseball scene in the Middle East and in Israel are far different. And in this case, the players on these very American-sounding teams are actually Arab and Jewish seventh graders from Ramle and Modi'in, located about 20 kilometers apart.

The kids are participating in a pilot program called 'Baseball Lekulam' or Baseball for All in English, run by the Israel Association of Baseball (IAB), the international non-profit, Play Global, with financial support from the Jewish National Fund (JNF).

"I love to hit the ball," says Adam , 12, an Israeli Arab, who attends the Orthodox Christian School in the mixed Arab-Jewish city Ramle. "And I love the schnitzel served at lunch." His friend Sagi, an Israeli Jew from Modi'in nods in agreement to his friend's statements.

Baseball for All has given Adam and Sagi, the opportunity to play ball for the first time in their lives and interact in a way that they may not have been possible before -- as an Arab and Jewish kid living in two different cities.

The nine-month program which began in March 2015 entailed three baseball sessions and overnighters at the Baptist Village's baseball field, located outside of Petah Tikvah, which also has dining and housing facilities. In between the three practice sessions, two family nights were also held in Ramle and Kibbutz Gezer. All the sessions were held in Hebrew, English and Arabic.

The 25 participants of the December session - who started the program as sixth graders - played ball and joked with each other during the final session as good friends. Hugs and high fives ensued after one kid made it to the home plate.

"All the kids learned to play baseball from the same standpoint - as beginners," explained Nate Fish, the National Director of the IAB and one of the planners behind the program.

"The kids from Modi'in were a bit more familiar with baseball as some come from American homes."
In order to draw interest to the program from the Israeli Arab community, Fish contacted Amal Abu-Sif, a PhD candidate from the Department of Social Work at Ben Gurion University who has worked extensively on co-existence projects in Israel and has many connections with the Israeli Arab and Palestinian community.

"Amal connected us with a Christian Orthodox School in Ramle and we went to speak with the principal and parents to convince them about getting their kids to join this program."

"While baseball is less known in the Israeli Arab community, we somehow across to the parents and school administrators how great this program would be," explained Fish. "They then helped scout out the kids that would be best suited for this."

Once Fish had 15 Arab kids from Ramle and 15 Jewish kids from the greater Modi'in fully committed to the program, the first session took place in March.

"At first the mingling between the kids was slow and so we had them interact through different ice breakers and games."

"But by the third session, no one was paying attention to who was who. The kids were just hanging out together on the field and off," said Fish.

"It was amazing to see how the kids grew over this past year and how much they've learned about this American sport."

The last session of the program was supposed to have taken place in October but it was postponed to December due to concerns raised by parents in light of the security situation. "The kids still wanted to meet back in October," commented Fish. "They like hanging out."

"It's been so much fun meeting new people and just having fun together!" exclaims Joad, 12, from Ramle. "What I love about baseball is running and throwing the ball. I love using up my energy." she added.

Indeed, Baseball for All is just as much about co-existence as it is about raising awareness about the sport of baseball in Israel.

There are around 1,000 people involved with the Israel Association of Baseball's programs, clinics and teams, and the number of baseball players is growing, albeit slowly, according to Fish. Many of the kids who took part in this pilot program, will continue to play baseball on local teams.

Fish is a former minor leaguer from Ohio who made aliya in 2013 to help strengthen Israel's baseball program as the director of the IAB, which was founded in 1986 to promote baseball culture in Israel.
He came to Israel with extensive baseball experience, having played for Germany, Argentina, Puerto Rico, and the Dominican Republican. He had played baseball for the Tel Aviv Lightning in 2007 during the inaugural season of the now-defunct Israel Baseball League, the first pro baseball league in the Middle East. Fish also coached the Israeli national baseball team in the European championships.

But not everyone involved with managing the baseball scene in Israel necessarily grew up with the sport. Margo Sugerman, the secretary general of the IAB and one of the Baseball for All staffers knew nothing of the American sport as a child in her native South Africa.

She was drawn to the sport when her own son began playing as a kid and loved watching his games. "I came across baseball in Israel as a mom," she said.

Having lived in Israel for 27 years, Sugerman says that today she is fully certified baseball umpire, having completed an umpire's course, and also helps to coach the baseball team representing her home city of Tel Mond. "I find myself on the field every week," she says.

"I love working with kids and it's been a great experience to be involved with Baseball for All."
"This program shows the kids that they're not so different from each other," Sugerman commented. "I feel that there should be a program like this for adults too."

"Having preconceived notions erased at any age, both as kids and adults, is so important."

Similarly, the President of the Israel Association for Baseball, Peter Kurz, originally from New York, also got into baseball because of his 9-year-old son. "I was always a fan of the game but when my son started playing, I got much more involved."

In addition to serving as president of the IAB, Kurz is also the Vice President of the European Confederation of Baseball. He serves as the manager of JNF's Project Baseball, which supports all baseball programs in Israel, including field projects.

"There are many kids and adults who have to travel in order to play on a proper baseball diamond. We're aiming to make baseball and the American values of sportsmanship and leadership that go with it, more available to everyone," he said.

David Leichman, one of the veteran faces of Israeli baseball, who is helping to staff the Baseball for All, is currently working on locating an appropriate playing field in Ramle so that local baseball players can play on a field instead of parking lots.

A Jewish educator, Leichman grew up playing softball on the concrete pavements of Queens, New York and immigrated to Israel in 1976. He helped found Kibbutz Gezer along with other North American oliim, near Ramle. They believed early on that their kids needed to have the opportunity to play ball in Israel too.
"We were probably one of the few kibbutzniks at that time who also had baseball gloves. We would play softball in the sandlot," recalled Leichman. In 1983, Leichman cleared a corn field with other kibbutz residents and backed by American donations, built a ball field within six weeks.

Pitching a baseball during a warm-up to Joad, who wears a pink baseball mitt during the December session, the 64-year-old Leichman looks very much at home on the baseball diamond. "The beauty of what is happening here is that everyone is learning to play ball by the same rules," said Leichman.
A strong proponent of co-existence initiatives, one of Leichman's closest friends was the late Samir Dabit, an Israeli Arab who owned a well-known hummus restaurant in Ramle. "We always argued nicely about politics," said Leichman, first ate at Samir's restaurant 35 years ago. "Both our families became very close over the years and Samir was a very dear friend to me."

Dabit's grandson, Sami Salman, is one of the coaches taking part in the Baseball for All program.
Sami told the Magazine that it was Leichman who introduced him to baseball. "I've been playing baseball for three years now. I even saw the World Series last year!"

"It's a cool sport - there all kinds of things happening on the field," said Salman, who is studying business administration and international relations in Rishon Lezion where he says he is the only Arab student in his class.

"Growing up in a mixed city, can be confusing sometimes in regards to identity. I went to a Jewish kindergarten and spoke Hebrew since I was young. Arabs and Jews in Ramle have always tried to coexist together," said Salman.

"I'm not sure what I'm going to do when I grow up but I hope baseball will always be a part of my life," he concluded.

In addition to the IAB and Nate Fish, Play Global, an international non-profit organization that specializes in running baseball programs for areas of conflict, had a key role in producing Baseball for All. The executive director of the U.S-based Play Global, Tom Gillespie, who is a scout for the Pittsburg Pirates, flew in for the earlier sessions of the program and the non-profit also sent in visiting coaches.

"This is the first time Play Global has been involved with such a program in Israel and they came on board right at the inception," said Fish. "I worked with Tom on creating the pilot program."

"I wish the need for such a program didn't have to exist; that these connections between kids would just happen on their own. But we are happy to provide a platform for bringing two cultures together."

The final session of Baseball for All, which is set to continue for next year as well, had Fish teaching the new ball players how to sing the unofficial anthem of North American baseball, "Take Me Out to the Ball Game." The kids sang along in Hebrew and Arabic accents, exchanging giggles and smiles with each other, the real signs of success for the program.

*The article was originally published in the Jerusalem Post Magazine.