Pittsburgh Mayor Bill Peduto has been a long-time ally to the LGBTQ community, from his days as a legislative aide to his years on City Council and now in his first months as Mayor.

When I asked him if he would be willing to take an HIV test at the local LGBTQ Community Center (GLCC), he didn't hesitate. Keep in mind, I asked in in November -- after he won the Mayor's race and while in the midst of setting up his Administration (he was inaugurated in January 2014.) We weren't able to make it work for World AIDS Day so I proposed that we focus on June 27 which is National HIV Testing Day.

He agreed, but his schedule didn't allow him to get tested on June 27. So he offered to get tested earlier in the month and make a PSA to encourage others to follow suit.

Peduto's office in the City County Building is less than two blocks from the Community Center which has regular testing hours every Thursday from 5-9 PM. Aside from being the Mayor, it was almost literally the scenario of a convenient, confidential location that we wanted to promote. Testing is free and confidential as well as available to all ages thanks to the support of UPMC Adolescent Clinic and Division of Adolescent and Young Adult Medicine, Children's Hospital of Pittsburgh of UPMC and grant funding.

"Knowing your HIV status is key to a healthy life," explains Lyndsey Sickler, GLCC Co-Chair. "We are one of several community testing sites. The Mayor left his office, walked less than 2 blocks and was able to be tested in 10 minutes. That's an example of how simple the process can be."

National HIV Testing Day was launched in 1995 by the National Association of People with AIDS in response to the growing number of HIV infections in communities of color and other heavily impacted communities. Nearly 1.1 million people are living with HIV in the U.S., and one in six don't know they are infected. HIV testing is a critical first step in taking control and responsibility over one's health.

In the PSA, Peduto emphasizes that knowledge is key. "Once you find out, then you have a full life to live," he states, sitting in the GLCC medical room in front of dozens of pamphlets and resources to help persons living with HIV access the supports they need.

Peduto has been a long-time supporter of the GLCC. He was the first individual donor to the membership campaign and has been a guest-caller at OUTrageous Bingo, the GLCC's largest fundraiser. After being tested, Peduto immediately tweeted out a photo of himself recording the PSA with a message encouraging others to do likewise. 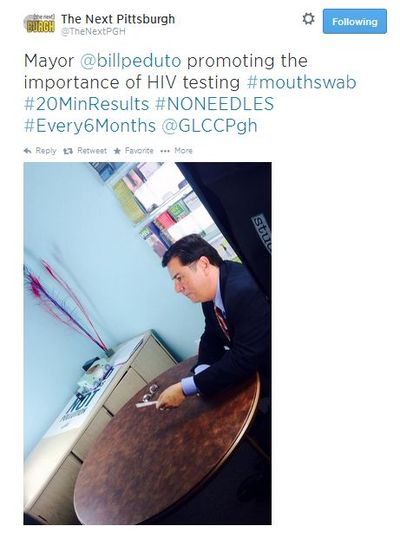 "There are many local resources for testing -- community locations, your personal doctor and Pittsburgh based organizations like Persad, PATF and Project Silk," states Sickler. "Living with uncertainty or fear is not living. If you are HIV+, there are medical treatments and supports available to help our neighbors live long, productive and healthy lives."

As an unmarried, middle-aged heterosexual white male, as well as Mayor of a City the size of Pittsburgh, Bill Peduto's willingness to make time to get tested and to publicly talk about the importance of testing sets a positive example for elected officials around the nation. In the United States, nearly 1.1 million people are living with HIV, and one in six don't know they are infected. Getting tested is the first step to finding out if you have HIV. Decreasing stigma by creating a positive message around testing is a critical tool to reaching those 1 in 6 people.

From Cleveland to DC, other Mayors have paved the way with public discussion of their decision to get tested. Peduto joins the ranks of those who go beyond proclamations to personal investment in their own health and the health of the people they serve. His avid use of social media only increases the odds that the 1 in 6 people we need to reach will learn about HIV testing resources in Pittsburgh (or in their community) and take advantage of the opportunity to know their status.

I have my issues and concerns with the status of Pittsburgh's Municipal Equality for LGBTQ residents and employees, but I can say with absolute sincerity that this is one of the most satisfying projects that I've worked on in recent years. As well as Mayor Peduto, the GLCC worked very hard to coordinate this effort and the Gender Dances Project donated the videography and editing skills.