The ToonSeum is a Pittsburgh based boutique style museum dedicated to comics and cartoons and their fans. ToonSeum is mostly volunteer driven and serves mainly adult fans with some programming focused on children or families.

Earlier this week, Executive Director Joe Wos received an email from a member informing him that they were cancelling their membership because of the ToonSeum's affiliation with Pittsburgh's PrideFest. ToonSeum is hosting a VIP Lounge during the upcoming Chaka Khan concert for "Pride in the Streets" which they have dubbed "Kitty Pryde Fest VIP Lounge" -- ToonSeum is located on the block of Liberty Avenue in Pittsburgh that is home to PrideFest.

Today I got an email saying "we will not be renewing our membership because of your participation in pride fest, and their gay agenda." they then went on to express their disappointment as "cartoons are meant to be wholesome family entertainment." I told them I would personally refund their membership out of my pocket, and that perhaps they should watch some vintage Warner Brothers cartoons and adjust their definition of "wholesome." Then perhaps look at the world around them, the wonderful people in it and adjust their definition of "family." Sadly this is not the first nor the last time that we will have this issue and others like it come up. I have been told "we won't come there because it's by all those gay bars." "We won't come down there because it's by planned parenthood." We won't come there because it's on GASP! Liberty Avenue" and the only one I agree with...we won't come down there because of the cities parking enforcement. I know a hundred reasons not to do anything because it's always going to be easier to just lie on the couch than it is to live an active, productive, creative life, filled with diversity, art and joy. Cartoons are for everyone and we are happy to share our block with Pride. At any rate we lost a member today. But stood up for our block and our "family"

ToonSeum has also partnered with Pittsburgh's LGBTQ Community Center to sponsor a Pride Night Game Night after PrideFest as well as hosting events for the Pittsburgh LGBTQ Film Festival, working with Gay for Good and other community events.

That same day, it was announced that a independent theater in a Pittsburgh suburb was canceling their showing of the Dan Savage "Hump Tour" because of possible zoning violations due to the adult content of the festival.

I spoke with Wos about this situation and the ToonSeum's support of the LGBTQ community. After my piece was published on my personal blog, it received nearly 1,000 visitors which is astounding. So I followed up with Wos again later in the day.

If you look on our Facebook you will see the overwhelming support and one person who said they will no longer follow us. We had about 6 people drop from our mailing list. We also had several people make donations or buy memberships. But truthfully none of that matters. You just have to do what is right. Any risk or consequence or any reward is irrelevant because doing right and treating people right is simply the only choice in my mind. It isn't someone's sexuality that matters it's their humanity that requires we treat all people equally and with respect.

One thing that struck me about the complaint is that the ToonSeum has been promoting the gay agenda for years, both in terms of your exhibits and your support of LGBTQ community groups. Why did they notice now?

I think they noticed now because we included a promo for our participation in our newsletter and we were very supportive in posting gay oriented comics images during the lead up to the ruling on gay marriage. It became very clear that the ToonSeum as an organization had taken a stand in support of the LGBTQ community. In many ways this is unusual for an organization to do. Supporting what many misguided individuals consider a "political issue" when it is in fact a human rights issue. It isn't just a problem with perception of the "issue" it's about perception of the ToonSeum. We are a museum that does a lot with kids and families, however we also do a lot for just adults. We are not a Children's Museum. We are a museum for everyone.

The first thing people tend to say in a discussion like this is "I love Bugs Bunny in drag." What are some other examples of comics and cartoons exploring subversive gender and sexual norms?

Batman was "outed" by "Seduction of the Innocence" during the comic witch hunt, which used it as an example of the homoerotic nature of comics. This was of course denied and still is. And even if it truly was without any homosexual reference inferred, the fact that it had to be defended puts it historically as one of the many incidents of media having defend itself for perception of homosexuality! Spongebob has had to defend against such attacks as well, it happens again and again. I think we live in a society now where Spongebob could soon come out and say, yeah so what I'm gay, its a kids show, we have never shown sex on the screen before what makes you think we would do it now? Many characters are left-handed, it's a characteristic you are born with, it has no bearing on the show itself or it's content necessarily. It's a part of who they are but it ultimately doesn't define them.

Cartoons have often used crossdressing as a gag, it dates back to vaudeville, and can be argued further to classical theater when men played all roles. But there is more to it. Bugs Bunny isn't just in drag, he is actively seducing Elmer Fudd. There is also a lot of male characters kissing their atagonists in Looney Tunes! There are other characters that have taken cues from gay stereotypes and culture. Snagglepuss sure seems gay! lol. and Vanity Smurf come on! I think many of these you have to go, yeah we know. It doesn't matter we still love you crazy toons.

I also teach my kids that to be a superhero you have to stand up for those around you who can't stand up for themselves. Sometimes that is hard. Sometimes it's unpopular. If you see a person on the ground, reach out and take them by the hand. Guess what? just because you are holding their hand to help them up, it doesn't "make you gay!" It makes you compassionate it makes you a hero.

For a small museum, losing a dozen members or supporters can be financially devastating. As a person with a disability, I'm personally grateful they are hosting the Kitty Pryde Lounge as it means I can attend the Chaka Khan concert and have all the accommodations I need to enjoy the show. I've volunteered at ToonSeum, I'm a member and I am very proud of their support.

While I don't believe there is a connection between this incident and the concerns raised in Dormont, I do suspect this is part of a cultural backlash to the recent federal court ruling bringing marriage equality to Pennsylvania. If the online LGBTQ community can respond to the homophobia of a small business in Pittsburg, Texas -- can we channel that same energy into the small museum ally in Pittsburgh, Pennsylvania?

To read the complete interview with ToonSeum Director Joe Wos and find out how to show your support for ToonSeum, visit Pittsburgh Lesbian Correspondents.

Joe Wos (right) with Brad Altman and George Takei at the ToonSeum during a Gay for Good collaborative event in 2012. 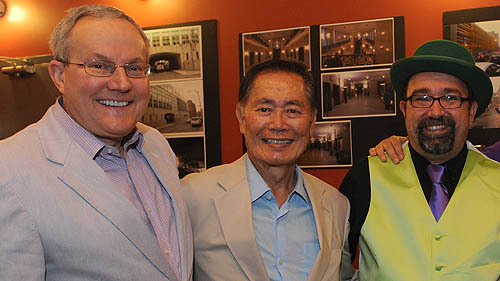