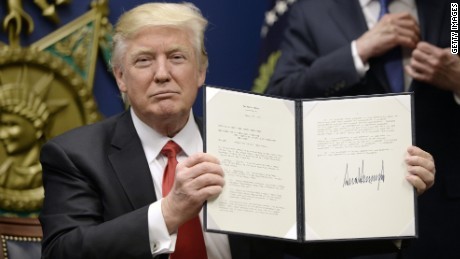 Nothing is more boring than the Federal notice-and-comment rulemaking process under the Federal Administrative Procedures Act (APA). It is dry, obscure, and complex. Trust me, I teach seminars on it, and even the perkiest student on my most entertaining day needs heroic amounts of coffee to bear up.

But being so dense and foreign to most Americans has made Federal rulemaking traditionally perfect for exploitation by politicians. Private businesses can always find rules to complain about, and examples of pointless, over-reaching rules can always be found to support the comPlaints . But one thing is clear: Specific bad rules aside, whenever politicians get their hands on the APA itself, they always manage to make it worse.

And now the latest: President Donald Trump, on January 30, 2017, his tenth day in office, has issued a new Executive Order titled "Reducing Regulation and Controlling Regulatory Costs" (see full text), designed, in his words, to help business. "We're cutting regulations massively for small business -- and for large business," he explained. "But for small business, and that's what this is about today."

The solution? Instead of identifying a single needless regulation hurting small business, the new Executive Order goes straight to the process. For each new rule, delete two old ones. Sound logical and direct? What could possibly go wrong with this concept?

Well, actually, plenty. First some context. Federal rulemaking, beyond being awesomely complex, is also awesomely important to how the United States government functions. Over six hundred major and minor rules were adopted in 2016 alone. Stereotypes aside, few of these rules reflect the whim or caprice of obscure rogue agency bureaucrats. Rather, most are written to implement broadly-drafted acts of Congress or respond to demands of stakeholders: businesses, utilities, farmers, Congressmen, health providers, and yes, consumers, the environment, and the public. Businesses actually like many of the rules agencies adopt, especially those that create certainty, open opportunities, encourage customers, and provide a level playing field.

These rules govern everything from keeping airplanes flying, mines from collapsing, stock markets from being cheated, not to mention safe food, safe factories, solvent banks, clean air, and truthful advertising. When regulations malfunction - either by doing too much or too little - people feel the impact directly.

And more, promulgating a major new Federal rule is hardly easy. The process literally takes years in most cases. Beyond the basic Federal Register notice and comment required by Federal law since 1935, modern statutes require a blizzard of technical and economic reviews (most prominently the economic cost-benefit analysis and the Environmental Impact Statement) and stakeholder consultations. Controversial new rules can draw tens of thousands of public comments (including organized "Click here to comment" form letters), each requiring public written response, and can be blocked at multiple points along the way: internal agency sign-offs, review by the Office of Management and Budget (OMB), challenges by members of Congress, and finally the multiple avenues for review by the Federal courts.

Agencies have spent years developing ways to avoid the headaches of APA rulemaking by strategies such as issuing less-formal "interpretations," "no action letters," "guidance documents," "bulletins," or other materials exempt from the APA. Otherwise, they'd be handcuffed trying to respond quickly to routine public demands.

President Trump's new Executive Order, by tinkering with process instead of substance (not identifying any regulations to eliminate), threatens to gum up the works ever further for years to come. The new system has two basic elements:

a. First, for each new rule an agency issues, it must publicly identify two existing rules to eliminate. That actually is the easier part.

b. Then, for each year, the agency must calculate (i) the total implementation costs imposed on private businesses from all the new rules it adopts, as well as (ii) the total savings in costs from all the rules it repeals, and (c) the net total, which must be zero or less. In future years, the net total would have to fit an annual budget of allowable new costs, which could be a negative number.

Strikingly, all this cost accounting totally ignores the potential benefits of new rules -- clean air, reductions in work hours lost to injury or illness, safe financial markets, business opportunities, so on - a sharp departure from the cost/benefit approach taken by earlier reforms and making it far less "public interest" friendly.

Finally, to direct the new process, the Executive Order mandates the creation of a vast and complicated system of rules and procedures for calculating costs, keeping score on offsetting rules and repeals across months and years, filing reports, and deciding disputes, all under the control of the Office of Management and Budget (OMB) which manages Federal rulemaking for the White House. The OMB Director enjoys full discretion to grant waivers and exceptions as he and his boss, the President, see fit.

So what's wrong with the new system? Put aside its obvious anti-regulatory bias. And put aside also some obvious legal impediments to applying it government wide, since (a) Executive Orders like this generally don't apply to independent commissions like the SEC, the FCC, the Federal Reserve, and others protected by statute from White House control and (b) most regulations, in varying degrees of specificity, are mandated by statute and cannot simply be repealed.

More important is that the new process simply fails to fix the problem it complains about. Yes, there is too much government regulation - or at least the bad kind that hampers private business in America. But President Trump's Executive Order fails to identify or remove a single bad rule. Instead, it leaves this job to the very bureaucrats it distrusts. The winners under the Executive Order won't be private American businesses, but instead will be the legions of work-for-hire special-interest lawyers, economists, consultants, and bureaucratic infighters destined to make millions of dollars haggling over the complicated new procedures on behalf of deep-pocket clients. It creates a brand new swamp.

And the losers will be all the businesses and stakeholders who play by the rules and depend on Federal agencies to do their jobs, make decisions in a timely way, and enjoy the certainty of an orderly regulatory process.

Here's the bottom line. Fixing over-regulation is hard work. Someone has to take the time to scour the rulebooks, identify the bad ones, and follow the tedious legal steps to remove them. For example: If you don't like parts of Dodd-Frank, then repeal those parts of Dodd-Frank.