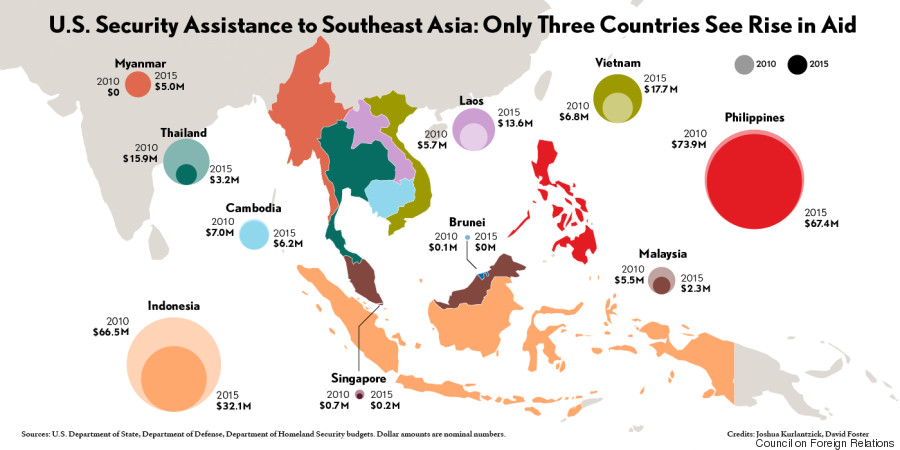 Of the 10 nations in Southeast Asia, only Laos, Myanmar and Vietnam received larger outlays of U.S. security assistance in 2015 than in 2010, and only Vietnam received increased aid for programs that directly boost military-to-military relations. Much of the assistance to Laos is for de-mining programs, and the majority of U.S. security assistance to Myanmar was for narcotics control and de-mining. Assistance to U.S. treaty allies Thailand and the Philippines fell by 79.9 percent and 8.8 percent, respectively, since 2010; assistance to Indonesia, Malaysia, and Singapore -- important partners in intelligence sharing, counterterrorism, anti-piracy patrols and other programs -- dropped by 51.7 percent, 58.2 percent and 71.4 percent. Security assistance to tiny, rich Brunei and to Cambodia remained negligible.

The decline in actual assistance suggests the White House has not followed through on its vow to bolster security relationships with Southeast Asian nations. The Obama administration has begun to boost maritime security assistance for Southeast Asian nations, but only since 2015. To be sure, U.S. law required the White House to cut some assistance to Thailand after its May 2014 coup, and U.S. leaders remain wary of boosting security relationships with semi-authoritarian, unstable countries such as Cambodia, Myanmar and Laos. But Malaysia, Indonesia and the Philippines, all of which also saw aid levels drop, are large, relatively stable and critical U.S. partners in helping maintain freedom of navigation in Asian waters. 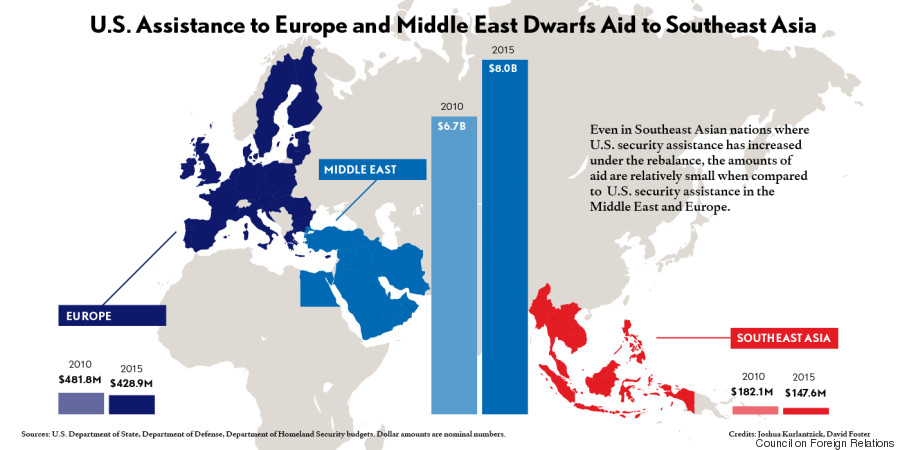 Meanwhile, evidence from Europe and the Middle East suggests that the White House continues to prioritize these regions. As the graphic above shows, aid to Southeast Asia decreased by $34.5 million between 2010 and 2015, while total U.S. security assistance to the Middle East and North Africa rose by nearly $1.3 billion over the same time period. U.S. security assistance to Europe decreased by $52.9 million between 2010 and 2015.

Given the relatively small amount of aid to Southeast Asia, the White House probably could have boosted assistance to Southeast Asian nations between 2010 and 2015 without dramatically altering funding for nations in Europe and the Middle East.

This article originally appeared at the Council on Foreign Relations.