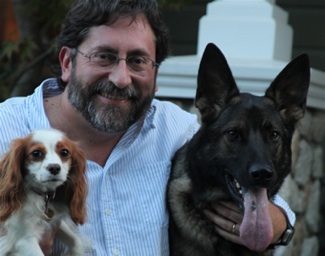 Bob Peterson is an animator, screenwriter, director and voice actor who, for the past 15 years, has worked for one of the coolest companies in the world---PIXAR Animation Studio. His Finding Nemo screenplay was nominated for an Oscar and just last week, PIXAR'S smash-hit animated feature, Up---which he co-wrote and co-directed---garnered five Oscar nominations. Bob also performed the voices of Roz in Monsters, Inc., and Mr. Ray in Finding Nemo. In Up, Bob is the voice of the friendly, loyal scientifically enabled talking dog, Dug.

I have a special place in my heart for animated features because, as a child, my highly fertile imagination was deeply informed by the now iconic films, Snow White and the Seven Dwarfs, Bambi, Cinderella, Lady and the Tramp and, of course, 101 Dalmations. Animated features are the fairy tales of today and have as profound an impact on the children who experience them as the stories of Hans Christian Anderson and the Brothers Grimm had on my generation and many generations before me.

Bob Peterson and his colleagues at PIXAR, have taken on the mantle of Hans Christian Anderson, the Brothers Grimm and the great, modern-day, fairy tale-spinner himself, Walt Disney. With astounding, cutting-edge innovations in digital animation and consistently brilliant storytelling, they are capturing and nurturing the imaginations of children, not only in the U.S., but around the world -- and their parents as well!

I called Bob, out-of-the-blue, to ask if he'd be a guest on Lively Licks--a blog I write on FetchDog.com--and he was gracious enough to accept. Having been the voice of Kala, Tarzan's gorilla mother, in Walt Disney's animated feature, Tarzan, I was particularly interested in how Bob came up with the voice of the lovable Dug. Bob was a generous and witty collaborator. We had a lot of fun and are now bone fide friends. The following interview begins with questions to Bob and then switches to questions for Dug.

Bob requested that Canine Companions for Independence be the beneficiary of his charitable shop on FetchDog.com. In the interview, he explains why he chose this impressive organization. Jake, Bill (my two dogs) and I are thrilled to welcome Bob, his dogs Rosy, Ava and Dug, as well as Canine Companions onto Lively Licks, FetchDog.com and The Huffington Post. Enjoy!

Glenn Close: When and how did you become a dog lover?

Bob Peterson: I've always loved dogs and have had one since I was three. We bought her from a kid selling puppies out of a cardboard box on the street where we lived in New York City. Great dog. We named her "Marcella" after a Raggedy Ann character. She grew up with us.

BP: When you look into the eyes of a dog you know someone is there. Plus, DOGS ARE JUST AWESOME!!! 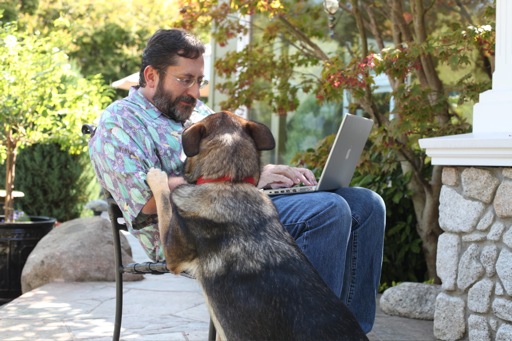 Rosy is on a roll. Bob can't type fast enough.

GC: Have you ever rescued a dog?

BP: Yes. After my wife and I were married we obtained a rescue dog from a family that didn't want her anymore. She was a beautiful Collie/Shepherd mix named "Precious." It then came to pass that our first marital "debate" was whether we should change the dog's name away from the same name used by the wacky villain in Silence of the Lambs. Yes, that dog was also named "Precious." Whenever we were out walking the dog in public we would chicken out from using her real name and refer to her as "Vicious." But she wasn't vicious, so we gave that up. Finally, we decided, that, darn it, "Precious" was her name, and what right did we have to change it? After a while we grew to know that she was a precious dog. She became part of our family and our children's lives. Now that she's gone we miss her a lot. Great. I'm crying. Thanks, Glenn Close!

GC: Is Dug based on a specific dog? If so, how did the animators translate a real dog's behavior into an animated dog's behavior?

BP: I wrote Dug as a combination of all the dogs I've owned. Marcella, Precious, Rosy, and Ava are all in there. The distractibility of Dug (SQUIRREL!!) is based on a game I'd play with my dogs. On a hot day the dogs would be panting to cool themselves down. So, I'd jump in and pant along with them. Then I'd stop abruptly and pretend I'd seen something important. The dogs would do the same and go to attention along with me. Long pause. Then, everyone back to panting. It was hilarious. Also I've noticed that dogs have an amazing capacity to give love immediately to people that they meet for the first time. Hence the line "I have just met you and I love you." Dug says this to our old man character, Carl, when they first meet. It's a challenge to Carl accept his new "family" who loves him and needs his attention. That line was also born out of something a camper said to me when I was a camp counselor in college. The kid had just met me but his first words were "you are my counselor and I love you." This phrase has been tucked away for 20 years but it felt so right for the instantaneous love a dog gives that I put it in the film. The wonderful thing about the talking dog collars in UP is that we were able to hear the thoughts of the dogs without moving their mouths or emoting like a human. The dogs could pant, scratch, and move the way dogs truly do. The animators studied the movements of many dogs, and we had a dog specialist come in and talk to us about dog behavior. 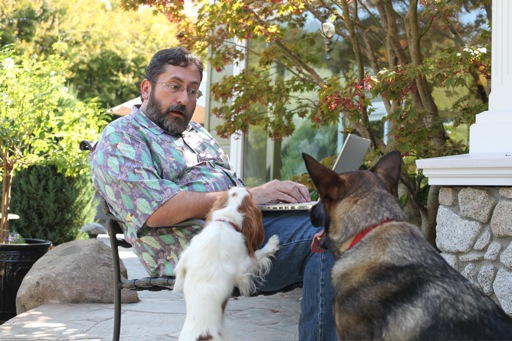 GC: How did you come by your Dug voice?

BP: I never know exactly how I'll do a voice for a character until I step up to the mic. Since I had written his dialogue, I knew that his dog collar would mishandle English a bit in a charming dog-like way, but I didn't know just what he'd sound like. And then, Dug's voice just started coming out. It was like that with Roz too. In analyzing it, I realized that Dug's voice sounds a lot how I talk to my dogs. I use overly sincere elongated words: "Hiii You Dawwgs." That pattern of speech feels dog-like somehow and they love it.

GC: How did you come up with the idea of the nasty Doberman's malfunctioning voice-collar and voice?

BP: We knew we wanted a strong dog to be Muntz' (the villain's) heavy presence out on the mountain, since Muntz was getting up there in age and was not so mobile. We at first tried Alpha with the voice of a regular tough guy and that seemed cliche, so we then tried his voice as if it were translated in a Japanese monster movie, but again, cliche. I had the idea of pitching the voice up due to a defective collar. This we hoped would round out his character - give him a chink in his armor. He had to overcompensate and be even meaner to prove himself when paired with this helium voice. And, frankly, it was funny! 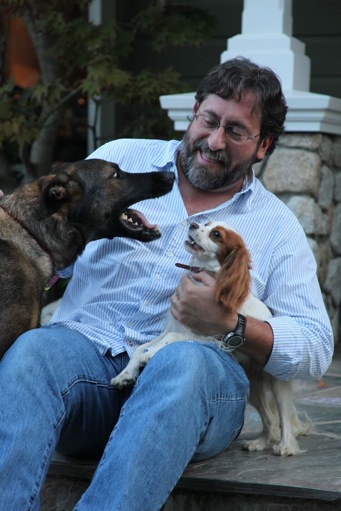 GC: What is the funniest thing you have seen one of your dogs do?

BP: Just watching the antics of a large German Shepherd (Rosy) and a tiny Cavalier King Charles Spaniel (Ava) together is good for hours of entertainment. The funniest thing though - our little dog chomps onto our big dog's tail and "flies" around behind her as the big dog races around the yard.


GC: What affect do your dogs have on your children?

BP: The affect is different for the different aged kids. Ann (14) likes to have a tiny dog to nurture. Matt (7) enjoys the responsibility of walking and feeding them, Julia (4) has been able to hone her skills at poking and pulling ears and tails.


GC: Is there a secret about you that only your dogs know?

BP: I'm a lot less cranky when it's just me and my dog.


GC: What is your dogs' pet peeve about you?

BP: They can't understand why I don't take them everywhere I go.


GC: What is your pet peeve about your dogs?

BP: When I am napping on the couch, Rosy will come up and give me a big wet dog kiss shlurp in my ear. Not my favorite.


THE FOLLOWING QUESTIONS ARE FOR DUG:


GC: What would be the title of your autobiography?

DUG: "Want To Meet Everyone and I Love Them" 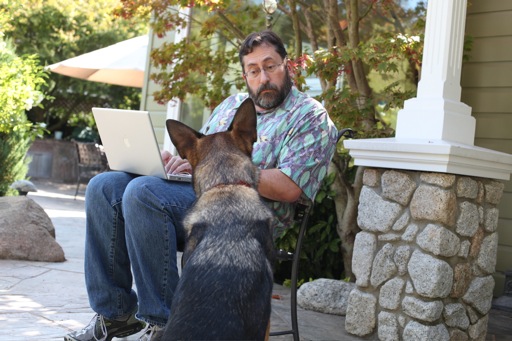 Sometimes it's hard to admit you're wrong.

GC: What would be your favorite movie?

DUG: A funny movie where the squirrel gets dead.


GC: If you were a famous human, who would you be?

DUG: My master! Carl Fredriksen. He is surely famous!


GC: What musical instrument would you play?


GC: What do you think about cats? Other dogs?


GC: If you could choose a profession, what would it be?

DUG: I like to get scratched behind the place where the noises come in. If you throw a ball, I will chase the ball---CAT!!!! Now I do not see a cat yet again.


GC: Where do you sleep at night?

DUG: On the ground or---when my master is quiet---I sleep on his head.


GC: What is your idea of perfect happiness?

DUG: A nap under the warm ball in the sky.


GC: What is your master's idea of perfect happiness?

DUG: A nap under the warm ball in the sky with his best friend. Me.


GC: Bob, why did you choose Canine Companions for Independence as your charity?

BP: A good friend of mine, Bay area veterinarian, Chrisann Ohler, recently had to put down her amazingly wonderful dog of many years, a Yellow Lab named Prima. Prima was part of the breeding program at Canine Companions and many of her pups are now active participants, helping many people lead easier lives. So, I choose this charity in honor of Chrisann and Prima. 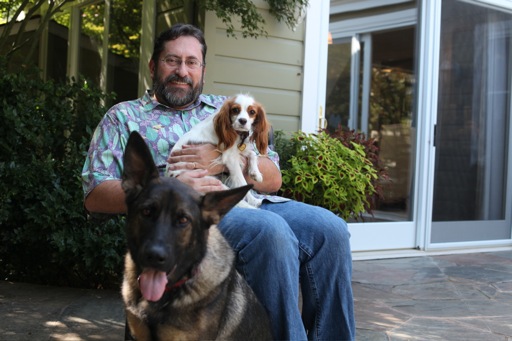 Happy after a productive day.