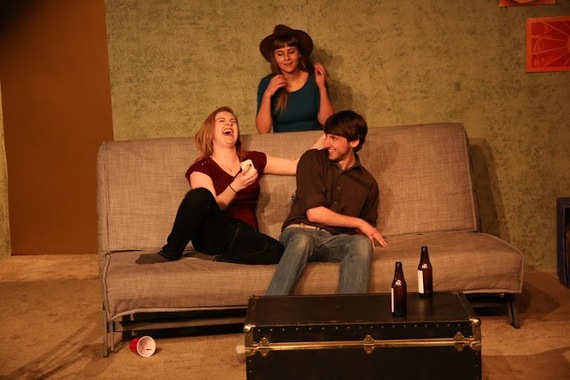 Sun and Room is an affectionate and painfully honest look into those college years you might want to forget. It explores transitional friendships and nights that come with freshman year and often go without reflection. Written by Danny Mitarotondo and directed by Shannon Fillion, the play takes place over a single, normal night in the life of three college students. Like any good teen drama, it centers on a party. Like any good college party, the action starts when the sun sets and ends when it rises. What separates Sun and Room from dozens of teen movies and TV shows is its dedication to real life experiences. These young characters are not dealing with handguns, drug busts or surprise pregnancies. Their dramas are internal. Personal tragedies and deaths linger in the background as off-stage action. Like in real life, the characters' burdens continually challenge them without stealing their spotlight.

Each of the actors, Leah Brewer, Zoë Pike, and Matthew Socci, play characters named after themselves. Each plays to the combined loneliness and eagerness of the college experience in his or her own way, but the chemistry between them feels organic. Their natural performances are born from the playwrights' writing process. Sun and Room was written for these actors specifically.

Mitarotondo did a series of interviews with each of the actors when developing their characters. Rehearsals began before the script was finished. Mitarotondo sat in rehearsals and studied their natural behavior and wrote it into the script. The result? A play and performances that were at times almost too true. The honesty of the play may make the audience feel like voyeurs. Especially when cast members strip down and hook up.

Sun and Room does not completely demolish the fourth wall, but it puts a few big holes in it. 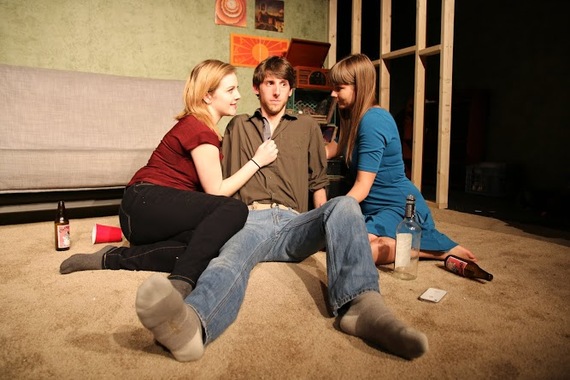 Selfies, Kanye and iPhones reveal that Sun and Room takes place in 2015, but the music played at the party and vintage LP covers on the wall suggest that young people have been behaving the same way across many generations.

Mitarotondo wrote the script on sheet music. After studying each actor's vocal intonations, he composed the lines so that when the three actors spoke they sounded like a chorus that included a bass, an alto and a soprano. The script gives as much weight to the rhythm and key of the voices as to the words spoken.

The musical aspect of the play appeals to the ear, but the production also takes advantage of the audience's sense of smell. When the characters do laundry, the theatre smells of detergent. When the script calls for pizza, the tomato sauce is real. When there is vomit... well, the dedication to realism is impressive.

Sun and Room is not afraid to remind us that sometimes young people fail. The party sucks. No one shows up. And yet, pictures of the night's event would probably be instagrammed with the hashtag #bestnightever. And, in some ways, it kind of is: the fun about the play is that it depicts a total fail, while still making it enjoyable for both the audience and the characters in it. That oxymoron alone might sum up the college experience. The contradiction is also what's so scary about college years: we can't wait to get out into the world, but we're afraid this moment of suspension might be as good as it ever gets. Sun and Room illustrates the juxtaposition well.

You can catch the last two nights of the play's New York premiere at the Paradise Factory on 64 E. 4th St. in New York's East Village. The Brontosaurus Haircut Production has been running since February 6 and will close on the 21st.