The effort to improve pizza crust is always a worthy endeavor.

Pizza Hut's new Hot Dog Bites Pizza deserves our attention. It transforms the edge of the crust, which is at best barely tolerated in an attempt to not be wasteful and at worst completely discarded, into dough-covered hot dog nuggets with French's Mustard dipping sauce. Hot dogs, though they have their flaws, are certainly more appealing than crust. Here it the pizza in all its Frankenstein-ish glory: 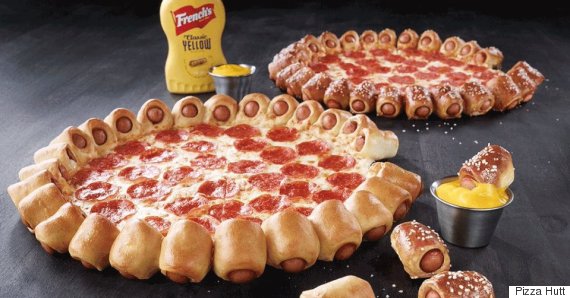 At first glance, this would seem to be a worthy addition to the field of pizza innovations. But we've been down this road before. and it's important to exercise caution.

It was 20 years ago when we first eagerly tried Pizza Hut's stuffed crust pizza. Cheese, inside the crust! What could possibly be bad about that? But it was bad. It was as unnecessarily sweet as Subway bread (as a side note, do you know why you can smell a Subway restaurant from three miles away? It's because of the sugar).

The cheese also had a synthetic garlic taste. It tasted like what a chemistry major in the bottom quintile of their class would tell you was an acceptable garlic substitute made from entirely inorganic material. For that same chemical garlic taste, see also: Papa John's garlic sauce. See it, and then throw it in the trash.

This is all to say that, though we like hot dogs and we spent much of our college years eating hot dogs for periods of seven days straight (we called it “woof woof week”), we remain skeptical.

But don't let us stop you. Bloomberg reports that the Hot Dog Bites Pizza is in the United States from now until July 11, or until 1.5 million of these things are sold.

1
#5) New Haven, Connecticut
Just the fact alone that the tiny city of New Haven is home to America’s best pizza, the white clam pie at the legendary Frank Pepe, is enough to earn it a spot on our list, but Pepe’s just the tip of the iceberg. In New Haven, pizza isn’t pizza, it’s apizza, and it’s thin-crusted, oblong, coal-fired, deeply charred, the crust is chewier thanks to a longer fermentation, and it doesn’t automatically come topped with “mootz.” Head to Pepe’s, Sally’s, or Modern Apizza (each of which have been around since the ‘20s or ‘30s), sample the goods, wash it all down with a Foxon Park soda, and get ready for a life-changing pizza experience. Click Here to More of the World’s Best Cities for PizzaPhoto Credit: © Flickr / Mark H. Anbinder
2
#4) Boston, Massachusetts
In Boston, pizza is a way of life. There’s no such thing as a Boston-style pie, but that’s because they’ve managed to take just about every other regional style, from bar pie to “sauce on top” pies to traditional Neapolitan to square Sicilian, and perfect it. The legendary Santarpio’s puts their sauce on top of the cheese and toppings on the bottom and claims that this is the best way to do it (it would be hard to argue after trying a slice); Regina Pizza serves one of the country’s perfect plain slices; the crust on Picco’s pies is crunchy, chewy, yeasty, and slightly sour (in a good way) and the toppings are all local, organic, and homemade; and at Galleria Umberto the square slices are cheesy and greasy in all the right ways, yet paradoxically light as air.Photo Credit: © Flickr / michelle@TNS
3
#3) Rome, Italy
Believe it or not, the pizza scene in Rome has only recently taken off, but what a scene it’s become. The Italian capital has found a formula that works — super-high-quality ingredients, creative toppings, and a fine dining-style experience — and they’re milking it for all it’s worth, with incredibly impressive (and lucrative) results. There are still plenty of old-style pizzerias and bakeries serving traditional oblong pizza alla pala, but newcomers like Sforno (serving a paradigm-shifting cacio e pepe pizza); La Gatta Mangiona (supplementing pizzas topped with potato, salmon, mozzarella, and parsley with more than 200 wines and 70 craft beers); Pizzarium (where Rome’s most famous pizzaiolo, Gabriele Bonci, has been creating genius pies topped with items like rabbit, raisins, and fennel greens since 2003); and La Fucina (breaking the mold by pre-slicing their pizzas so diners can sample multiple varieties, like the one topped with flowers, shrimp, mozzarella, and lardo) have turned pizza in Rome from a post-war peasant food to seriously high-class fare. Photo Credit: © Flickr / nekotankClick Here to More of the World’s Best Cities for Pizza
Advertisement
4
#2) Naples, Italy
Of course, the birthplace of pizza as we know it would rank high on our list. And while it could easily be resting on its laurels and serving mass-produced dreck to flocks of tourists (some places there certainly do), the overall quality level of pizza to be found in Naples is astonishingly high. The most famous pizzerias in Naples have been owned by the same families for generations, and the level of excellence has been meticulously consistent. While places all around the world may claim to serve Neapolitan pizza, there really is nothing like eating one in its birthplace. Here, pizza must be cooked at a super-high temperature in a domed, wood-fired brick oven, taking a minute and a half to cook tops, and the end result is complex, smoky, soft and light, slightly puffy, and sparsely topped, with a slightly soupy center that requires a knife and fork (or if you want it to-go, it can be folded up and eaten off of heavy-duty paper). There’s complex chemistry at play here, and at places like Da Michele, Il Pizzaiolo del Presidente, Antica Pizzeria Port’Alba, and Di Matteo, you’ll get a front-row seat. Photo Credit: © Flickr / atrphoto
5
#1) New York, New York
New York City: the best pizza town in the world. It was here that pizza found its first foothold in the New World, and also here that the most popular form of pizza — the slice — was invented. Never mind the dollar slice joints or the (still generally very good) corner pizzerias; the truly great slices can be found at the old-school spots like Patsy’s, Totonno’s, Grimaldi’s, and Lombardi’s, where New York-style pizza was invented and still thrives. But pizza in New York doesn’t stop there: you can find flawless Neapolitan-style pies at places like Motorino, Kesté, and Lucali; St. Louis-style pizza at Speedy Romeo, a mind-blowing square slice at L&B Spumoni Gardens, a slice bigger than your head at Koronet, deep-fried pie at Don Antonio by Starita, and fearlessly creative toppings at hotspots like Roberta’s and Paulie Gee’s. If you want to try perfect interpretations of just about any style of pizza known to man, New York is the place to go, and that’s why it’s the best city for pizza in the world. Click Here to More of the World’s Best Cities for PizzaPhoto Credit: © Flickr / Katrina Koger