A while ago, the folks at Pizza Hut introduced the P'Zone, the chain's rendition of a calzone, with different kinds of pizza toppings stuffed into a hot pocket of baked dough. Now, Pizza Hut has introduced a similar item, the P'Zolo, which is essentially like a P'Zone, just in the shape of a sub sandwich -- in fact, their sandwich-competing tagline is, "See ya subs."

I'm not quite sure what pun Pizza Hut is trying to pull here. The P'Zone is obviously a play off "calzone," but the closest pun I can deduce for P'Zolo is that it's a play off of a tube-shaped "cannolo" (singular of cannoli). But that doesn't really make sense because that's filled with ricotta cheese and sweets, and served as dessert. The new P'Zolo is more like stromboli -- so shouldn't it be called a "P'Boli" or "P'Bolo" (singular)? Then again, they both end with the suffix -olo, so it could go either way.

But never mind the marketing puns and their gastronomic implications. The fact remains: Pizza Hut has a new sub competitor in town: the P'Zolo. Here's how it rates:

The Claims: Pizza Hut's P'Zolos come in three styles: Italian Steak, with shavings of steak, roasted peppers, onions and mushrooms; Buffalo Chicken, with strips of grilled chicken breast and a spicy buffalo sauce; and the Meat Trio, with Italian sausage, pepperoni and ham. Each of those combinations are completely enclosed in a doughy crust topped with Asiago cheese baked right in, and served with either Ranch dressing or marinara sauce. (Calorie information from PizzaHut.com hasn't yet been updated, but if you assume it's similar to the P'Zone, we're talking a range of 900-1100 calories for each P'Zolo.)

The Analyses/Verdicts: It shouldn't be surprising that what we have here is yet another reshuffling of existing inventory, just presented and branded in a new way. The exception to this is the steak in the Italian Steak P'Zolo, which appears to be a new addition to the Pizza Hut kitchen. Although, it's not entirely unfamiliar since Pizza Hut already has a supply of beef chunks as a pizza topping -- perhaps it's a sliced version of that same stock.

In any case, in terms of tastes, there's nothing new here. The buffalo sauce is just as it is when you get wings, the pepperoni tastes like standard pepperoni. However, if there's anything that Italian cuisine is known for -- and yes, I admit it's a really long stretch to consider Pizza Hut as authentic Italian food -- it's texture, which is the novelty here. Not only is it novel, but it's actually pretty good. The outside of the crust is crispy while the inside is chewy, plus that touch of Asiago cheese on top adds a nice introductory umami taste. The crust is thick enough around the filling that it keeps the steaminess inside (minus a few vents), which is a good thing when you finally bite into the warm, inner ingredients.

The Italian Steak P'Zolo is Pizza Hut's version of a Philly Cheesesteak Sandwich, with the sliced steak, onions, peppers and mushrooms, although it has nothing on an authentic one. When you dip it into the Ranch dressing, it's tastes like, well, a Philly Cheesesteak with a Ranchy tang (Grade: B-); when you dip it in marinara (Italian style), it takes like a Pizzasteak sandwich from Philadelphia, although not nearly as good (Grade: B).

The Buffalo Chicken P'Zolo obviously calls to be dipped in Ranch dressing; it's the closest offering to blue cheese. Sure you can dip it in the marinara, but the acidity of the buffalo and tomato sauces clash and it's not enjoyable (Grade C). The Ranch dressing is the more soothing of the two sauces, which is a welcome thing since the buffalo sauce inside the crust has a little bite to it -- not too spicy, but not too mild. As for the chicken, it's texture is a bit squishy (Grade B).

The Meat Trio P'Zolo is the most like an Italian-American stromboli or sausage roll, with the spiciness of sausage, and especially pepperoni, dominating the rest of the flavors under the baked dough. With that said, the Ranch dressing helps cool down that dominance, but doesn't really do much else than add a smear of tang in your mouth (Grade B). On the other hand, the marinara sauce really brings in an Italian experience to your taste buds (Grade B+) -- with the proviso that I already mentioned that to consider Pizza Hut as authentic Italian food is a really long stretch. 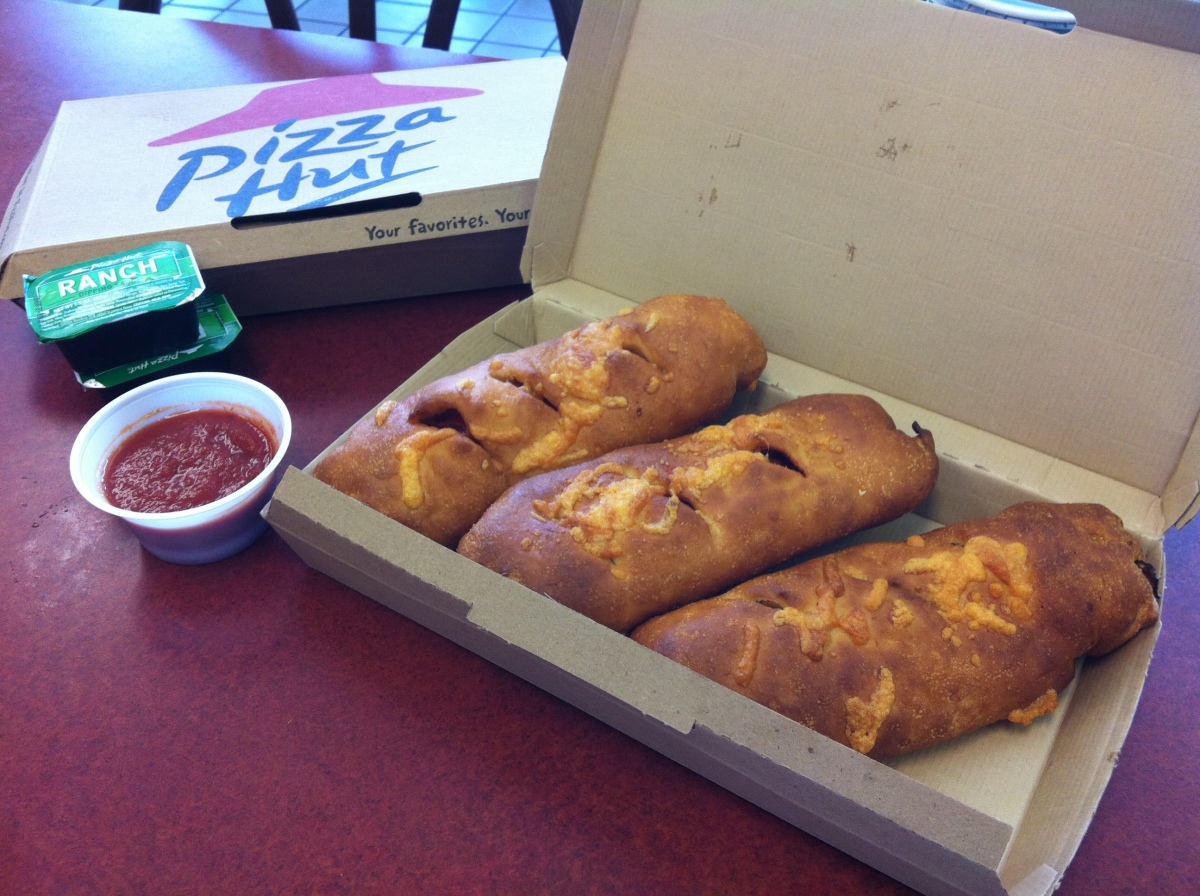