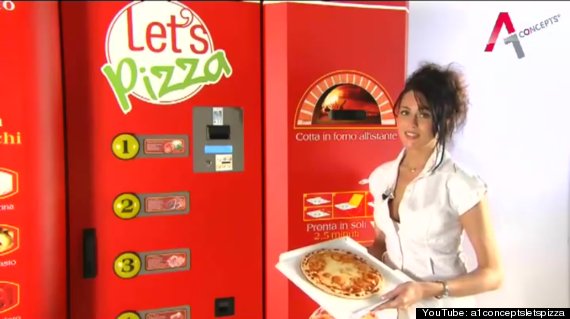 Move aside, sushi robots -- there's a new automated chef in town. Thanks to Italian inventor Claudio Torghel, for the past three years Europe has enjoyed vending machine pizza, made from scratch in two-and-a-half minutes flat. Now, its distributor, A1 Concepts, plans to bring the contraption to the U.S.

The machines, aptly named "Let's Pizza," will likely be installed in malls, airports, supermarkets, colleges, gas and bus stations and hospitals. A1 Concepts' CEO Ronald Rammers explained to Pizzamarketplace.com that the pies cook at such a fast rate because of the infra-red oven.

Rammers expressed confidence that the product would succeed in the States. "Let's Pizza is a huge success in Europe and especially in Italy," he said. "That was proof for us that we have a very good pizza."

He also revealed one location that's already interested in acquiring a machine: A large theme park in Florida. Which one could it be, pray tell? We'll just have to wait to find out.

In the meantime, watch this uncomfortably dubbed ad for Let's Pizza.