The newlyweds presented (and later served) two pizza portraits created by food artist Nathan Wyburn and commissioned by Domino's at their wedding on Saturday. Wyburn used dough as his canvas and tomato sauce and toppings as his paints. 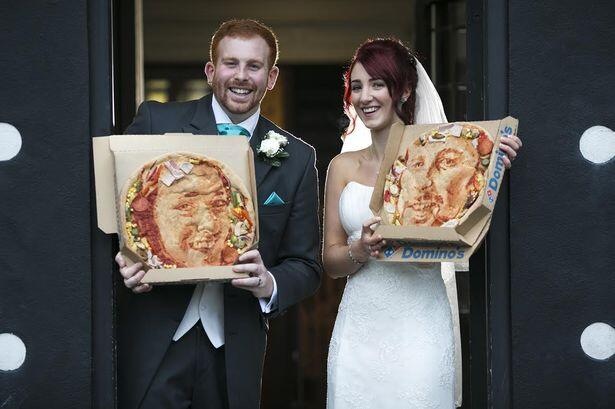 According to the Manchester Evening News, it took him more than three hours to create both pizzas, but it took the guests a lot less time to eat them.

The Morrises -- who share a deep love of pizza -- reached out to Domino's with their special request.

"We order Domino’s pizza all the time, so it felt right to incorporate them into the most special day of our lives," the groom told the Manchester Evening News.

Wyburn specializes in creating celebrity portraits and pop culture imagery with untraditional mediums like food. In January 2013, he posted a video of him creating a portrait of Kate Middleton using toast and a spread called Marmite. It now has nearly half a million hits on YouTube.

Watch Wyburn create the pizza masterpieces in the time-lapse video above.