Sarah Beaulieu was tired of pumping in silence, so to speak.

The mother of two was on a business trip, struggling to squeeze in a breast milk pumping session in an airport bathroom, when she realized that her situation was something working parents have to deal with every day -- but aren't talking about enough. So she decided to start the conversation by creating a Tumblr called "Places I Have Pumped."

"I was trying to figure out how many minutes/ounces I'd be able to pump before I had to literally run to get somewhere that was not a bathroom to be on a call," Beaulieu wrote in an email to The Huffington Post. "This was exactly the crazy moment of being a working parent that people don't talk about enough, and precisely what I wish someone had prepared me for."

Beaulieu -- who founded The Enliven Project, a campaign to foster dialogue about sexual violence -- snapped a photo in the bathroom.

"Washington, DC: Bathroom with marble walls," she wrote alongside the photo in her inaugural post. 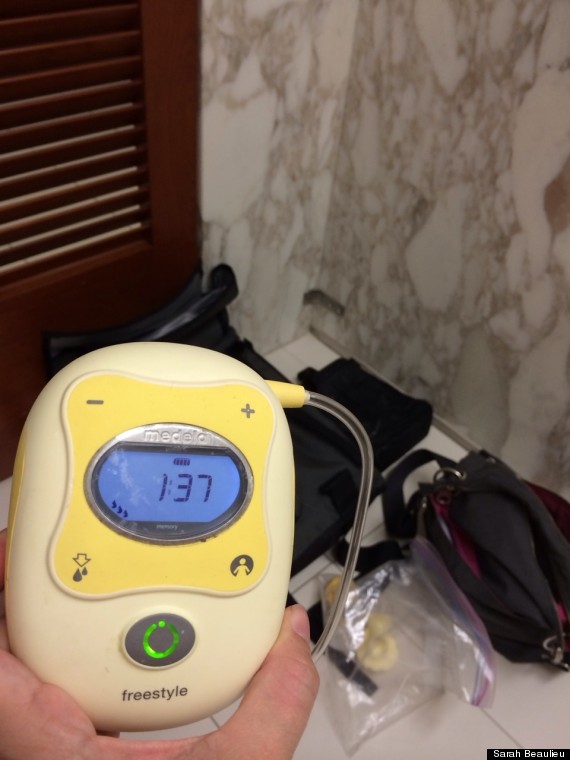 Since then, Beaulieu has pumped in office bathrooms, on trains, at gyms and even in the car, which she says makes her feel like a "multi-tasking superstar." But, pumping in public facilities does not come without issue. Beaulieu recalled one time, shortly after her first child was born -- and before she started using a hands-free breast pump -- when the motion-activated lights went out in the bathroom.

"Apparently, sitting on the floor holding my pump to me wasn't enough to trigger the motion-detector to keep the lights on," she told HuffPost. "There I was, pump whirring, in the pitch black, wondering how I was going to get the lights back on without spilling the precious milk."

The anecdote is just one of the problems Beaulieu has run into while balancing work and motherhood. Other working mothers have run into similar hardships while pumping at work, and some have even filed complaints with the U.S. Department of Labor over lost wages, lack of privacy and dirty bathrooms.

But, for Beaulieu, the photo blog is just about shedding light on one of the most common obstacles busy moms face.

"When you tell the truth about something that is challenging or frustrating, it becomes possible to change it -- or at least know you aren't alone in the experience. Truth -- however messy it may be -- connects us to each other," Beaulieu said.

Here are just some of the places Beaulieu has pumped: