Smokers are less likely to seek cigarettes if the packaging is plain, as opposed to packs that have brands on them, according to new research from the Universities of Exeter and Bristol in the U.K.

The photo below is one example of how cigarette packs were presented to study participants. Image A is the “plain pack,” while image B is the branded pack. 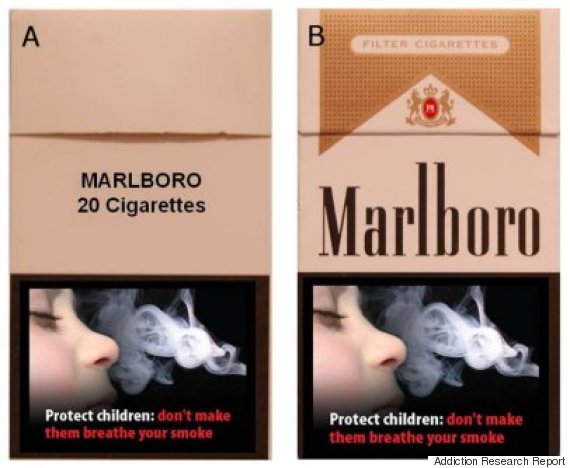 Lead investigator Lee Hogarth of the University of Exeter said the results support the notion that plain packaging can reduce smoking.

"Our study demonstrated that, under some circumstances, plain packaging can reduce cigarette-seeking behavior,” Hogarth said in a statement about his study. "Policy makers must consider how much weight to place on this observation when considering the potential pros and cons of introducing plain packing as a national policy."

The findings echo past experiments on cigarette branding, which have shown that plain packs are less appealing, provoke less craving in smokers and make the health warnings stand out more, Hogarth noted in his study.

The results have heightened significance in the U.K., where lawmakers announced plans at the beginning of 2015 to pursue legislation that would mandate standardized, plain packaging on all cigarettes.

Australia enacted strict plain packaging laws in Dec. 2012, and while tobacco sales data isn’t available, estimated tobacco and cigarette consumption is at its lowest number ever, according to the country’s department of health. Preliminary figures from Australia’s National Drug Strategy Household Survey also show that smoking in people ages 14 and older have fallen from 15.1 percent in 2010 to 12.8 percent in 2013. In people 18 and over, smoking rates fell from 15.9 percent in 2010 to 13.3 percent in 2013, and a 2014 survey even found that 49 percent of Australian smokers are in support of the plain packaging. Collecting data to show plain packaging works is crucial, as cigarette companies are fighting tooth and nail to make sure Australia’s laws don't become a new global standard. 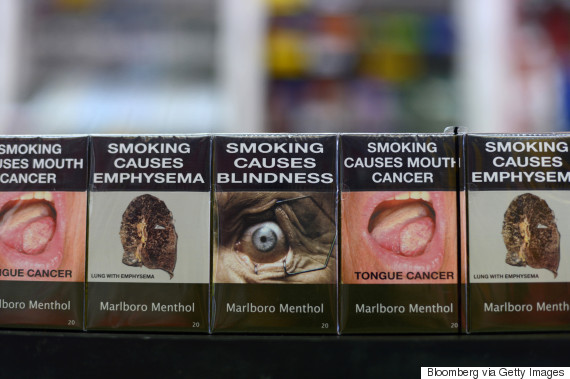 Packs of Philip Morris International Inc. Marlboro Menthol cigarettes in the new packaging are arranged for a photograph at a tobacco store in Melbourne, Australia, on Monday, Oct. 1, 2012. Photographer: Carla Gottgens/Bloomberg via Getty Images.

In the U.S., the Food and Drug Administration mounted a campaign to require that cigarette packs have large, graphic health warnings with diseased body parts (like lungs, or the corpse of a smoker) but backed down in 2013 when faced with a legal battle against America’s largest tobacco companies.

An estimated one billion people smoke and tobacco-related diseases kill nearly six million people a year, according to the World Health Organization.