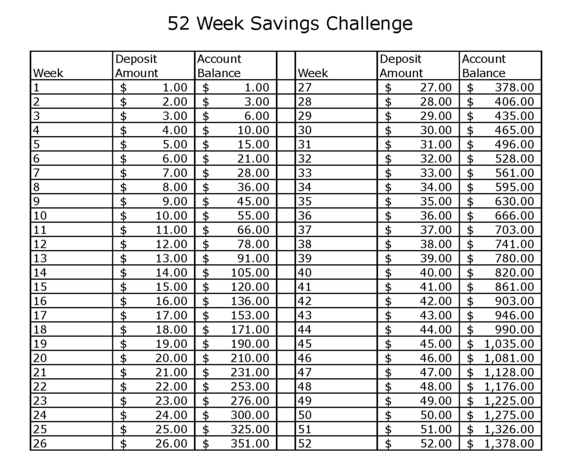 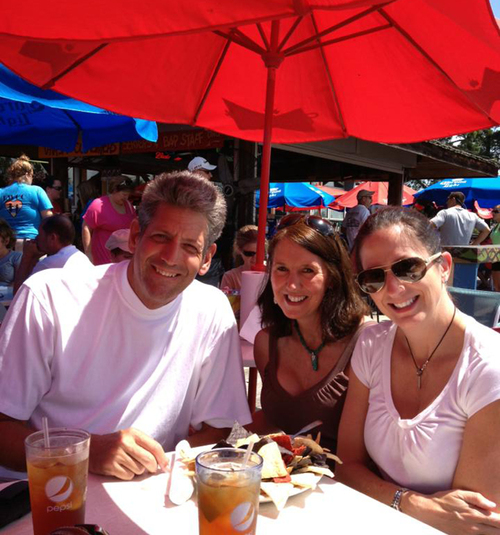 I shared the concept with my two siblings, who agreed to do it with me. What we each liked about the challenge was its doable goals coupled with a nice chunk of change at the end of the year. At the same time, we each took a different route. Our basic demographics vary: Jim, the eldest, is married, and has two children and three step-daughters. Katy, the youngest, is in her mid-forties, a single mom with two grade-school children, and is an RDA (Registered Dental Assistant). I am the middle child, who turns fifty in July, single with no children, and am a photographer and author. One notable accomplishment we all have in common is a Bachelor's degree.

Jim's approach was different than Katy's and mine in that he decided to work the chart backwards, starting with $52 the first week. "I started with $52 and worked my way down. I wanted to do the 'heavy lifting' first and get it out of the way, even though it was right after Christmas," says Jim. "Starting with the larger amounts, I already had a few hundred dollars after just two months, so that was encouraging to see significant results so soon."

Alternatively, Katy and I took the "random approach" where we saved weekly, but in no particular order. "I was motivated by keeping a chart where I highlighted off the weeks I had completed," says Katy. "It was especially motivating to see my savings account grow each week! Much like a weight loss routine and seeing the numbers on the tape measure go down."

The three of us kept each other up to date throughout the year with our progress and reported our different experiences.

Jim says, "I rounded off, and tried to round up when possible. That was easier than piling up a bunch of one dollar bills. I was astounded when I added it up. I knew it would be around the goal of $1,378...but to see one thousand dollars in twenty dollar bills...that was very unusual for me."

Katy involved her two children as well. "The Money Savings Challenge worked for me because it gave me immediate weekly goals. I didn't feel overwhelmed. As a divorced mom of two grade school children, it was easy to show my kids the overall goal. I showed them my chart, which was taped to my bathroom mirror, and explained how the process worked and why I was doing it. With the money I saved I'm taking my kids to Florida to visit their grandparents."

As for me, I continued on with the random weekly deposits into my manila envelope. Highlighted dollar amounts began to take over the chart, which was encouraging, and it was fun to count the accumulated money every month or so. It's one thing to see your bottom line in black and white on a bank statement, it's another to have the cash in hand adding up each week, when usually cash in hand is going out!

The impact of the experiment came with some surprising belief system shifts along the way, especially for Katy, who says, "The challenge greatly shifted my perception of saving money. Before, I'd just save what I could when I could and didn't make much progress. With the weekly commitment to save a specific amount, it became my priority to hit that goal." 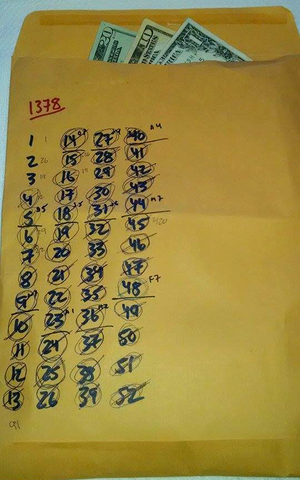 Jim is known to make charts and graphs for everything, so Katy and I knew he'd love this challenge. "I was very diligent about it," says Jim. "I think I never fell more than two weeks behind. I even paid in advance when I was going to be out of town. It was important to be persistent. I wrote down the numbers 1-52 on a manila envelope and crossed them off as I went along. It was like playing Bingo, but I knew I was going to win!"

By the end of the 52-Week Challenge, each of us had different results. Katy paid into her manila envelope weeks in advance. "I had completed the challenge in September, but continued to save. A huge part of my success with the challenge was having you two as a support system. I bounced ideas off you, I was inspired, motivated and didn't want to let you down by quitting!" says Katy. "Going forward I will always stick to a savings plan that I can live with. Being someone who likes achieving goals, a weekly savings challenge is perfect!"

Jim, on the other hand, stuck to the weekly contributions. "By going from the larger amounts to the smaller, I entered December owing just the $4, $3, $2, and $1. Ten bucks during Christmastime? That's easy. It was like a victory lap. What am I going to do with the $1,378? I don't know, I might just let it ride while I continue in 2015."

As for me, I hit a major medical emergency on October 8 (read: "Not My Day to Die"), which took me off course. The only thing I was able to focus on for the next several months was my health. In fact, as I write this, I am two weeks out from open-heart surgery recovery.

I'm on board with that plan!