By Tabassum Zakaria and Susan Cornwell

WASHINGTON, July 22 (Reuters) - President Barack Obama will move forward with a plan for the United States to arm the struggling Syrian rebels after some congressional concerns were eased, officials said on Monday.

"We believe we are in a position that the administration can move forward," House of Representatives Intelligence Committee Chairman Mike Rogers told Reuters.

The White House announced in June that it would offer military aid to vetted groups of Syrian rebels after two years of balking at directly sending arms to the opposition.

"We have been working with Congress to overcome some of the concerns that they initially had, and we believe that those concerns have been addressed and that we will now be able to proceed," a source familiar with the administration's thinking told Reuters on condition of anonymity.

But both Republicans and Democrats on the House and Senate intelligence committees had expressed worries that the arms could end up in the hands of Islamist militants in Syria like the Nusra Front, and would not be enough to tip the balance of the civil war against President Bashar al-Assad anyway.

Part of the logjam was broken on July 12 when members of the Senate Intelligence Committee who had questioned the wisdom of arming the insurgents decided behind closed doors to tentatively agree that the administration could go ahead with its plans, but sought updates as the covert effort proceeded.

Now, the House committee has also given at least a cautious go-ahead.

"It is important to note that there are still strong reservations," Rogers said. "We got a consensus that we could move forward with what the administration's plans and intentions are in Syria consistent with committee reservations."

The source familiar with the administration's thinking said, "The committees were persuaded and we will be able to move forward."

The timeline was unclear, but supporters of the rebels hope the deliveries of U.S.-provided arms will start in August.

They hope for "a large number of small weapons" such as rifles and basic anti-tank weapons, said Louay Sakka, a co-founder of the Syrian Support Group, which backs the Free Syrian Army fighting Assad.

Committee sessions on arming the rebels are classified and have been held in secret. Senior government figures like Secretary of State John Kerry have briefed lawmakers behind closed doors to persuade them to back the White House's Syria strategy. Rogers said he still had "very strong concerns" about the plan's chances of success.

The mostly Sunni Muslim rebels have been struggling since government forces, helped by Lebanese Hezbollah allies, took the strategic town of Qusair in early June. Backed by warplanes and artillery, Assad is much better armed than the rebels.

"It's too late to affect the outcome with a small amount of arms," Schiff said. "I think we would have to provide such a massive amount of arms, and additional military support to change the balance on the battlefield, that we would inevitably be drawn deeply into the civil war," he said.

"And I think we also have to expect that some of the weapons we provide are going to get into the hands of those who would use them against us," Schiff said.

He said his view is probably a minority one within the intelligence committee - but that for many Americans, after two wars in Iraq and Afghanistan, there is "little appetite for getting involved in a third."

Obama has been reluctant to intervene in the civil war in Syria, in which more then 100,000 people have died.

"Arms do not make peace," said Lakhdar Brahimi, the special peace envoy for Syria of the United Nations and the Arab League. "We would like to see the delivery of arms stopped to all sides," he told reporters in Washington.

He said the United States and Russia both agreed there was no military solution to the Syrian conflict "even if they are delivering weapons in the hope their side is going to win."

Brahimi said it was possible to find a political solution in efforts to bring together the warring parties for a peace conference in Geneva. "It is extremely difficult to bring (together) people who have been killing one another for two years just by waving a magic wand to a conference like this. It will take time but I hope it will happen."

Supported by Iran and Russia, Assad has looked increasingly stronger in recent months while the opposition has been fractured.

The fighting is further evidence that the 2011 uprising against Assad's rule has splintered into turf wars that have little to do with ousting him. 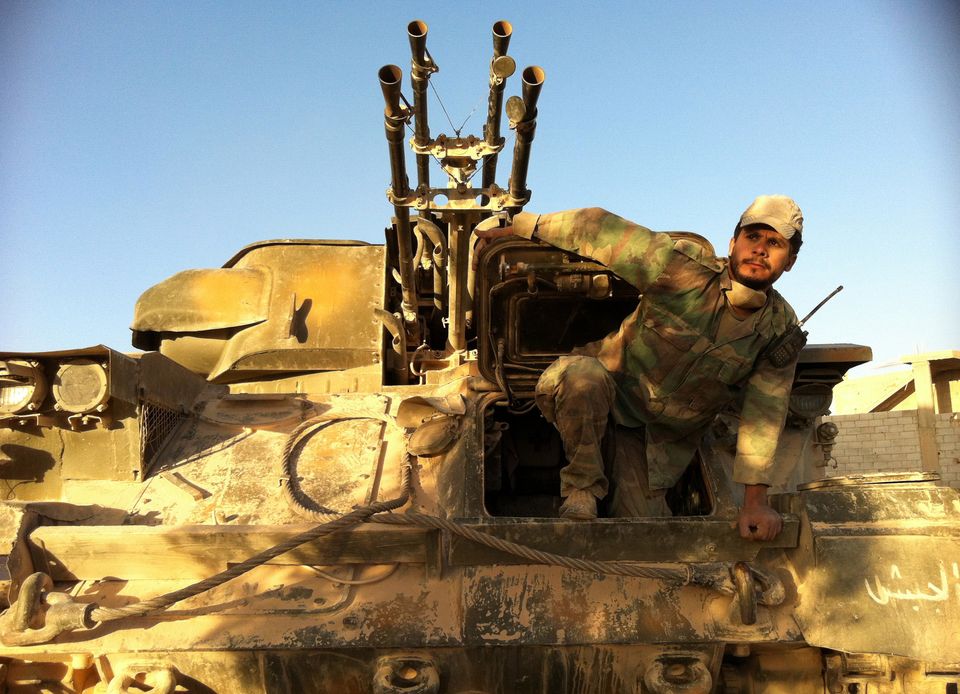