FORT LAUDERDALE, FL -- A twin-engine plane crashed into a warehouse parking lot near the Fort Lauderdale Executive Airport Friday afternoon, exploding in a ball of fire and killing those on board.

Officials confirmed there were three passengers who perished in the plane after it fell from the sky several minutes after takeoff. WSVN reports they are the owner of nearby Avionics Engineering, his son who was to be married in a matter of days, and a test pilot.

"I couldn't believe it," witness Rick Blackburn told the station. "I was amazed. I was standing outside of our shop, and the plane was banking, and you can kind of see it, and when it popped, it went right down to the ground, and it exploded. The impact was so severe that there wouldn't be any survivors because of the impact."

Footage from the scene showed firefighters working to put out a blaze that destroyed nearby cars and blew out windows in the 5300 block of Powerline Road, with a thick column of smoke rising into the sky. Matt Little, spokesman for Fort Lauderdale Fire Rescue, told the Miami Herald that "it's not just the plane in flames. It's seven cars and a boat, and all the fuel that's involved."

The flames "ate the plane up, at the plane the cars, and everything," said a man who captured video of the fire on his phone. "It was a ball of fire."

The pilot tried to turn back to the airport after experiencing engine failure but didn't make it, said Fort Lauderdale Fire Rescue Division Chief John San Angelo, according to the Herald. Witnesses told the South Florida Sun Sentinel that the plane rolled right and flipped upside down before impact. 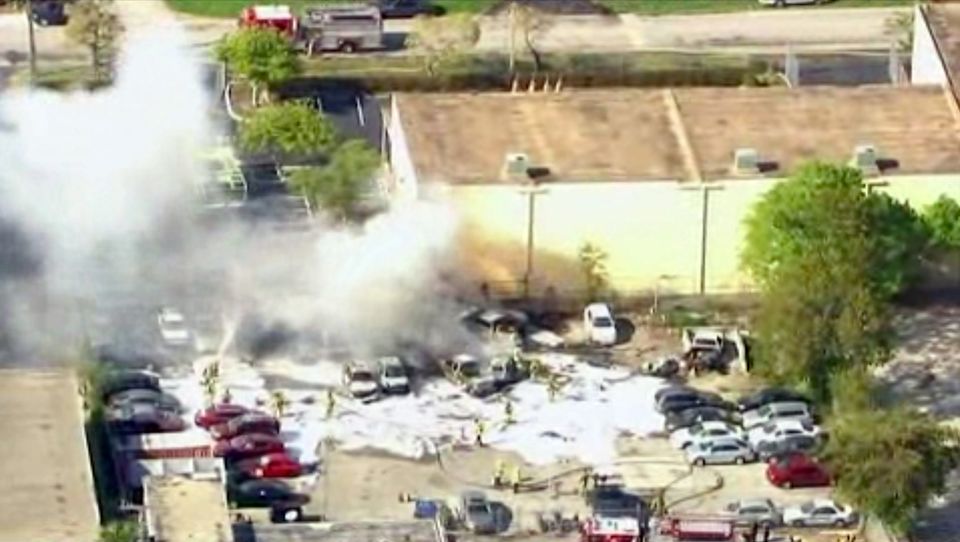 1 / 14
In this image taken from video, first responders work to extinguish burning vehicles after a small plane crashed into a parking lot near Fort Lauderdale Executive Airport in Fort Lauderdale, Fla. Friday afternoon, March 15, 2013, killing all three people onboard and burning about a dozen cars. No one on the ground was hurt. (AP Photo/APTN)
AP