As time marches on from decade to decade, one of the surest signs of change can be found in travelogues and documentaries that capture how new designs and technology alter the transportation industry. More than half a century after they were made (and in a style that might seem quite corny), these films demonstrate the changing demographics of those who have embraced new options in mass transit.

A recent article entitled The First Boeing 727 Prepares For Its Last Flight (published on AirlineReporter.com) described how a pioneering airliner was being prepared for its final journey to an aviation museum near Seattle. Two short films offer a remarkable contrast between the giddy optimism which provided the foundation for a 1952 TWA promo and the precise technology used in the landing process for an Airbus A380 aircraft on the final leg of a Lufthansa flight from Frankfurt to San Francisco.

Although it's not always feasible to get a plane onstage, there are ways to evoke the mystique of aviation in a musical comedy format. Consider the following scenes from 1970's Company, 1987's Nixon in China, and 2011's Catch Me If You Can.

For many years, buses and trains were the default vehicles for mass transit. One day, while poking around on YouTube, I came across two fascinating short films documenting the Third Avenue elevated rail line which used to run through Manhattan and The Bronx. The first film is about the last days of the "El" while the second film (to my shock and amazement) uses Wanda Landowska's recording of Haydn's Concerto No. 11 in D Major for harpsichord as its soundtrack.

At the same time that the Third Avenue El was nearing its end, luxury train travel was hitting a new peak.

Not surprisingly, trains have maintained a steady presence in Broadway musicals.

In 1971, when Cy Coleman composed the score for On the 20th Century, he captured the pulsing energy of a train in motion. When the musical was revived in 2015 by the Roundabout Theatre Company, the quartet of tap-dancing railroad porters appeared in a filmed promo for the show.

In 1984, Andrew Lloyd Weber took an anthropomorphic approach to trains with a new rock musical entitled Starlight Express (in which a child dreams that his toy trains have come alive). Although the show only lasted for 761 performances on Broadway, it ran for 7,406 performances in London and was extremely popular in Germany. The show's big gimmick? Each member of the cast represents a specific locomotive from the child's train set and performs the entire show on roller skates.

While the United States struggles with the concept of building high speed rail networks that can offer a practical alternative to air travel, I took advantage of the August doldrums to watch a fascinating documentary that had been featured in the 2015 San Francisco International Film Festival. What sets The Iron Ministry apart from most films about trains is that it captures different socioeconomic levels of China's vast population during that society's transition from the old-fashioned "green skin" trains to the new high speed bullet trains that Chinese officials are putting into service with a keen eye to the future.

Shot by J.P. Sniadecki as he rode the rails (and was frequently asked by railroad employees to stop filming), The Iron Ministry captures the sights and sounds of train travel by someone who is obviously in love with the phenomenon. As Sniadecki explains:

To capture as many different encounters as possible, I took trains throughout China, striving to be thorough without a need to be exhaustive, compelled more by the desire for movement and encounter than by any documentary notion of coverage. I hopped on trains in many different corners of China, as well as through the major arteries of the railway system. Some rides were 40+ hours, others were 20 minutes. I never had a clear goal for each journey.

Ernst [Karel] is an amazing sound artist. I have informal training in music as well, so we approached the film's sound design as a sonic composition. Attention to attack, release, resonant frequencies, atmosphere, dynamic range, and tonality all played a part in the design. We were open to and excited about the musicality of the train itself, whether by including songs actually played and recorded on the train, or by using the train sounds themselves to compose something akin to musique concrete.

Because it was not filmed as marketing tool for China's new high-speed rail network, The Iron Ministry captures multiple levels of society as people move around a huge nation. Some scenes show farmers boarding the trains with loads of fresh produce while others show a peasant seen butchering and selling meat while seated on the floor outside the main cabin of a railroad car. 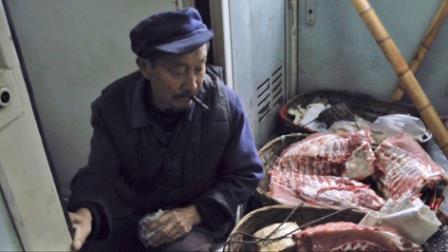 Some scenes involve young women discussing whether they want to find another factory job in a big city or look for some kind of work that does not require them to be stuck on a production line for 12 or more hours per day. Businessmen are seen traveling from one city to another as idealistic students in another compartment debate whether they should remain in China or attempt to emigrate to North America, where they might have better options and more freedom to pursue their dreams. 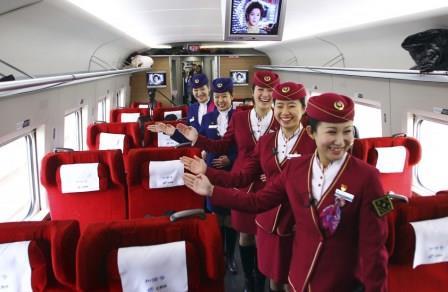 If you think Amtrak's service is terrible, you'll enjoy watching a mischievous little boy aboard one of the older trains lecture the people around him from his perch on an upper bunk with the following words of wisdom:

All passengers, your attention please. The 3838-438 train from the United States to Afghanistan is about to depart. We ask that those who are not aboard please take someone else's luggage, take someone else's wife, and hurry aboard. Those who have explosives, bombs, and other inflammable materials with them please hurry aboard and ignite them where there are crowds to contribute to our nation's population control policy. The train is moving fast, so please extend your hands and head out of the window as far as possible, making it easier to lose them all at once.

This is a civilized train, so please feel free to piss, shit, and throw trash all over the aisle. Other passengers may spit on your face and you may spit in the mouths of others, which is good for the thorough absorption of protein. As a disposable train, this one has been operating safely for 30 years. If you discover your head over your feet, you've arrived at the last stop: Heaven.

While some people are seen playing cards, ordering snacks, and chatting with fellow passengers (there's a fascinating scene with two young Muslims), the majority of passengers try to catch up on some much-needed sleep. 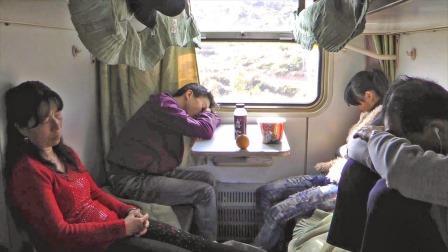 As the filmmaker explains:

The montage of The Iron Ministry constructs a singular train, as only through cinema can the old collectivist era 'green skin' trains be directly coupled to not only the later air-conditioned 'red skin' trains but also the newest high-speed bullet trains of today. As this cinema-train traverses the vast interiors of China, the camera also traverses a visual history of Chinese railway technology and infrastructure. Despite the process of steadily phasing out older 'green skin' trains (the train from Zizhong to Chengdu with the meat sellers and the peasants loaded with produce has already been eliminated), the coexistence and varied use of technologies belonging to different eras comes in and out of focus throughout the journey.

My hope was actually to depict a cross-section of the different trains operating within the Ministry of Railways, and the different carriage spaces of each class on the train. These vast disparities in class and culture, which we all know are a dimension of Chinese society, are nonetheless made more vivid and apparent within the space of the cinema-train. One of the ironies of the film, perhaps, is that against this backdrop China is making huge investments in social infrastructure...while I can hardly get a train to anywhere in much of my own country.

If you're the kind of person who hates being crammed together on subway trains with people who are poor, smelly, and unkempt, the segments of the The Iron Ministry that were shot on China's old "green-skin" trains will reinforce your worst prejudices against train travel. However, if you've reached your tipping point dealing with the petty aggravations of the airline industry, you'll find China's new high-speed rail a tempting vision of the future. Finally, if you are someone who loves the romance and history of train travel, you'll find The Iron Ministry utterly fascinating. Here's the trailer: