Environmentalists have had to spend a lot of time sounding alarms over the years. So it's exciting to hear about a project that is taking on an appalling problem with practical solutions and creating commercial diesel fuel technology at the same time. I spoke recently with Doug Woodring, founder of Project Kaisei, a new group setting sail in August to research and clean up the Pacific Ocean Garbage Patch. The charismatic Woodring

has garnered an enthusiastic response for their efforts from around the world. His group was one of ten named global Climate Heroes by the United Nations Environment Program this year. He said, "Last week a group of Silicon Valley Investors actually stood up and clapped after our presentation". And no wonder. He and his eclectic blend of international social entrepreneurs, ocean enthusiasts, and world-renowned scientists from Scripps are going to help clean up a big mess.

When people first hear about the Pacific Ocean Garbage Patch, most feel a deep sense of utter disgust. Hundreds of square miles of ocean, just North West of Hawaii are covered thick with floating human garbage -- discarded plastic bottles, cups, and bags from all over the world. The ocean's currents swirl this collection of garbage into a concentrated mass, creating what is also called The Plastic Vortex. More study is needed to accurately calculate its size, but some estimates put the patch at more than twice as big as Texas. It could be larger.

Clearly the Garbage Patch is a huge problem but no one is legally responsible for it.

Woodring said, "The garbage is out in international waters, the ocean's "No Man's Land". The plastic is degrading into small particles that fish eat and die from. The particles also attract a variety of toxins and PCBs." 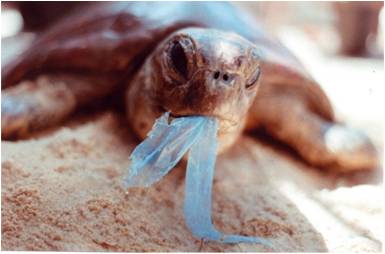 Scientists don't know exactly how badly this is contaminating our food and water supplies, but it can't be good. So who deals with this kind of thing? Until recently, there wasn't much of an organized response.

Charles Moore, the founder of the Algalita Marine Research Foundation, discovered the garbage patch while in a yachting competition. He has helped enormously to publicize the problem and is also leading an important voyage to collect more research on the Plastic in the Vortex. Project Kaisei is adding to these efforts by investing in new technology that can actually collect and recycle the plastic into diesel fuel. Their plans reflect a "new green economy" style of thinking that looks at the whole cycle of a problem.

The project leader Doug Woodring is a water sports enthusiast with an MBA from Wharton. He's been working to bring new environmental technology to life for many years through global funds at Merrill Lynch and ventures in microwind and vertical green walls. Born in California, he lives in Hong Kong. 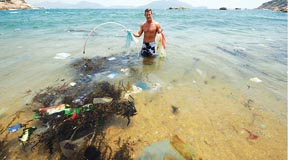 Woodring was able to raise money to support a partnership with the acclaimed Scripps Institution of Oceanography at UC San Diego. I spoke with one their partners at Scripps, Principal Development Engineer, Jim Dufour, who was ecstatic about the opportunity for their crew of scientists (Professors and Grad students) to collect this new research on a voyage out to the Plastic Vortex. He said, "It's so important to be able to quantify the problem on the micro, chemical, and food chain levels". Dufour pointed out that The Plastic Vortex is such a visually compelling problem that it can be a springboard for innovation and help people understand less tangible issues such as CO2.

Project Kaisei will set sail from California to the Garbage Patch with two research ships this August, one from Scripps, The New Horizon, and one from San Francisco, a 151ft brigantine vessel, The Kaisei -- which means Ocean Planet in Japanese. The teams include scientists, plastic specialists, ocean voyagers, surfers, marine sanctuary supporters, and a National Geographic film crew. They will study clean-up methods and utilize new machinery for recycling the plastic into diesel fuels, and implement a second voyage next year as well. In the long run the goal is to employ idle fishing fleets for the full clean up and power their vessels from the garbage they collect. Project Kaisei is also aiming to put into operation new commercial technologies for recycling plastic garbage at the ground level where it originates -- before it gets to the ocean. 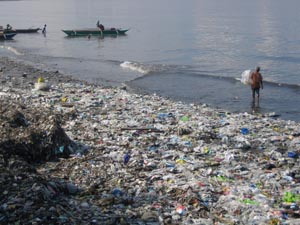 Jim Dufour from Scripps believes that "manufacturers of items such as plastic bags and cups bear some responsibility for their safe disposal. Society needs to start looking more closely at the whole life cycle of every product we use". There is both a private industry and common good responsibility here. Doug Woodring offers,

"Government regulations can be a positive driving force. Private companies often won't go to the next levels without them, but innovations and new patents go up with regulations". He says, "People used to think the ocean cleaned itself, but we're learning that's not the case. 95% of the world's plastics are never recycled, and a lot of it ends up in the world's oceans".

The good news is that there is value coming out of the garbage, especially before it gets to the ocean. Turning it into an innovative commercial opportunity is not out of reach.

Stay tuned for more information as the voyage sets sail in August.

Click here to find out more about Project Kaisei.

Mary Liz Thomson is a filmmaker and writer working in Los Angeles.