A trio of bright planets is shining together in the sunset sky, a must-see night sky sight for stargazers this Memorial Day weekend.

Three planets — Jupiter, Venus and Mercury — can be now be seen in the western sky at dusk, weather permitting, in a rare and beautiful gathering that changes from night to night. Astronomers call a meeting of objects in the night sky a conjunction, but this planet parade is better described as a "Grand Conjunction."

The brightest of the three planets is dazzling Venus, of course. Jupiter and fainter Mercury will also be very close by. All the action is taking place low in the west-northwest sky about 45 minutes to an hour after sunset where, over a span of a week, the three planets will seem to perform slow acrobatics; some might go so far as to call it a celestial pas de trios (French for a ballet of three), low in the evening sky. All three planets will be readily visible to the naked eye, but binoculars will certainly enhance the view. [Amazing Night Sky Photos of May 2013 (Gallery)]

From Friday to Tuesday (May 24 to May 29), Jupiter, Mercury and Venus will fit within a 5-degree circle — small enough to fit inside the bowl of the Big Dipper — an unusual configuration called a "trio." The planets will appear closest together on May 26th, when they are separated by less than 2.5 degrees. For comparison, your closed fist held out at arm's length covers about 10 degrees of the night sky.

Here is a chance to see for oneself that nearby solar system objects generally seem to move faster than more distant ones. Tonight (May 24), after darkness falls, we'll have a planet configuration in Taurus the Bull consisting of Mercury (109.5 million miles), Venus (153.3 million miles), and Jupiter (563.4 million). The motions of Mercury and Venus can be detected with the naked eye from one night to the next, but Jupiter's travel against the background stars is not very noticeable in even a week. [Jupiter, Venus & Mercury Get Together (Video)]

Also during the next few weeks we'll be treated to an exceptionally favorable elongation of Mercury for Northern Hemisphere observers. The planet's angular distance from the sun will reach a maximum of 24 degrees on June 12, about 4 degrees less than the greatest possible.

Here are some key local dates of events for skywatchers viewing at dusk in North America. You can see a video of the three planets' path here as they move across the night sky.

May 24: Mercury appears 1.4 degrees above Venus; Jupiter sits 4 degrees to their upper left.

May 26: This is the evening that the planet trio is tightest together — all three fit within a circle less than 2.5 degrees wide. They form a triangle with Mercury at the top, Jupiter at the lower left corner and Venus at the lower right. The Venus-Jupiter and Venus-Mercury gaps are both almost exactly 2 degrees. And Mercury is in conjunction with Jupiter, the pair separated by 2.4 degrees.

May 28: The two brightest planets, Venus and Jupiter are closest together, separated by just one degree (equal to the apparent width of two full moons). In the days leading up to now, Jupiter closes in on Venus from the upper left. This evening, Jupiter appears below and to the left of Venus and in the evenings that follow, then heads on down toward the glow of sunset. Jupiter's brightness easily rivals Sirius, the brightest star in the night sky, yet shines only one-sixth as bright as Venus. Even though Jupiter is on the far side of the sun and about as small as it ever appears, in a telescope it still shows the largest disk of any planet. Meanwhile, Mercury shines more than 3.5 degrees above Jupiter.

May 31: The three planets are now separating and going their separate ways; Jupiter sinking lower while Venus and Mercury edge higher up. All three are now stretched out and equally spaced in a diagonal line from upper left to lower right, spanning 8 degrees. Mercury is the highest, Venus is in the middle and Jupiter is down at the lower right. 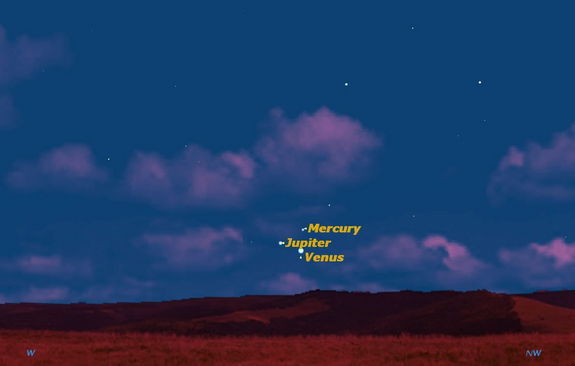 Just after sunset on Sunday May 26, the three brightest planets, Venus, Jupiter, and Mercury, will form a perfect tiny triangle in the western sky.

Consider some of the interesting contrasts between these three worlds:

Mercury is the smallest and closest planet to the sun; a rocky world with a surface very similar in appearance to that of the Moon, showing extensive basaltic-like plains and heavy cratering, indicating that it probably has been geologically inactive for billions of years.

Venus has often been referred to as our "sister" planet in terms of size, but is so shrouded in a thick atmosphere of carbon dioxide that its brilliance in our sky is largely due to its high reflectivity (about 76 percent). Thanks to that thick cloud blanket Venus is also the hottest planet, with temperatures of up to 872 degrees F (467 degrees C).

Jupiter is an entirely different kind of planet. It is the largest in our solar system and enveloped in a thick dense atmosphere composed chiefly of hydrogen and helium, and is icy cold (minus 234 degrees F or minus 145 degrees C). Ordinarily it appears second only to Venus in brightness, its remoteness being compensated by its great size. Its surface area is about 130 times that of Venus. It makes one wonder just how the ancient Romans decided to name Jupiter after the chief of the gods, although they knew nothing concerning the planet’s physical characteristics.

After the planets depart

As we transition from May into June, Mercury will be fading steadily, experiencing an 11-fold decrease in brightness in less than a month. As a consequence, this so-called "elusive planet" will be far easier to spot during this upcoming week when it will be brighter as well as setting about 1.5 hours after the sun as seen from mid-northern latitudes.

Friday, May 31, may very well be the last evening Jupiter will be readily visible for most observers. In the days that follow, the combination of low altitude and the bright evening twilight will team up to effectively hide it from our view until it reappears in the morning sky early in July.

As for Venus, it will slowly become easier to see in the western evening sky, but the operative word is slowly." Not until early September will Venus set until after the end of twilight and it’s saving it best showing for late November and early December when it will be more than twice as bright as it is now and will be setting three hours after the sun.

Editor's note: If you snap an amazing picture of the three planets or any other night sky view that you'd like to share for a possible story or image gallery, send photos, comments and your name and location to Managing Editor Tariq Malik at spacephotos@space.com.

Joe Rao serves as an instructor and guest lecturer at New York's Hayden Planetarium. He writes about astronomy for The New York Times and other publications, and he is also an on-camera meteorologist for News 12 Westchester, New York. Follow us on Twitter, Facebook and Google+. Original article on SPACE.com.