In this email from June 22nd, Captain Moore has reached the plankton bloom and describes a very scary midnight incident, which highlights some of the dangers of his crucial work:

Today, with roughly 1900 miles under our belt, we reached the outskirts of the plankton bloom/possible plastic accumulation zone we've been aiming for.


The early morning was spent fine-tuning the Bongo nets and Manta trawl for 24 straight hours of sampling over a 80 nautical mile transect.


Why the continuous sampling? Well Dr. Nikolai Maximenko, with the School of Ocean and Earth Science Technology (SOEST) in Hawai'i is interested in meso-scale (10-100km) variations across this predicted accumulation zone. Basically, he wants to see if a debris gradient can be established from the boundary to the central area of the phytoplankton bloom/ accumulation zone.


So, as I mentioned before we are sampling, starting outside and moving toward the maximum chlorophyll signal from the remote sensed plankton. We are running trawls for 2 hours, collecting the samples, and then redeploying them.


According to report published by NOAA, the amount of ocean plant life - phytoplankton - in the North Pacific Subtropical Gyre is decreasing at 1-4%/yr, and the species makeup of animals that feed on this primary production has changed.

To what degree does our plastic waste play a role in this phenomena? That is a question we would like to try to answer.

By 10am all hands were on deck and the sampling marathon began. "It's going to be a long, yet fruitful night," wrote our onboard blogger, Nicole. Little did she know what the night had in store for Alguita and her trusty Manta Trawl.

With a sea state ranging from 5-6 on the Beaufort scale, conditions were not ideal for sampling, but we were working through it. The swells were the largest we had seen all trip. Around midnight, after we were one-third through our transect, a series of minor mishaps turned into a major problem.

We had been shining our 10 million candlepower spotlight on the manta trawl as we brought it in, removed the sample bag and replaced it. On the manta's way back out, the rechargeable spotlight decided to go out and need a recharge, so we couldn't see the status of the trawl after it was let out.

When the lift rope hit the snatch block with a sneaker knot in it, it jammed and no one noticed. Not until the blocked pulley drove the manta underwater, since it pulls from the top of the hood, making the surface type trawl dive underwater. The tremendous force of this huge winged creature being hauled underwater bent the bar from which it was being towed and in so doing popped two lifelines.

We struggled and got the manta onboard, only to find that the lift rope bracket was broken off, the wings were bent and one attachment flange cracked open. We will locate an aluminum welder in Honolulu to repair the damage and sail on. We adjusted the lifelines and put them back on. No one was injured and equipment can be repaired. We continue sampling with a smaller plankton net and the paired bongo nets.

Looking at the trawl contents during the day, Nicole commented: "Coming from a first timer to the gyre, the samples we collect are truly astounding. In one regard it is amazing to have the opportunity to get up close and personal with planktonic organisms we catch while trawling. Today we caught several Portuguese Man- of -War, which are mesmerizing little critters. On the flip side, it is disturbing to watch chunks of debris spill out of the nets. It is bizarre and unsettling to find the detritus of our haphazard consumer lifestyle in one of the most remote parts of the world.

From the cutting edge of marine debris research,

Map of where Captain Moore and his crew are traveling: 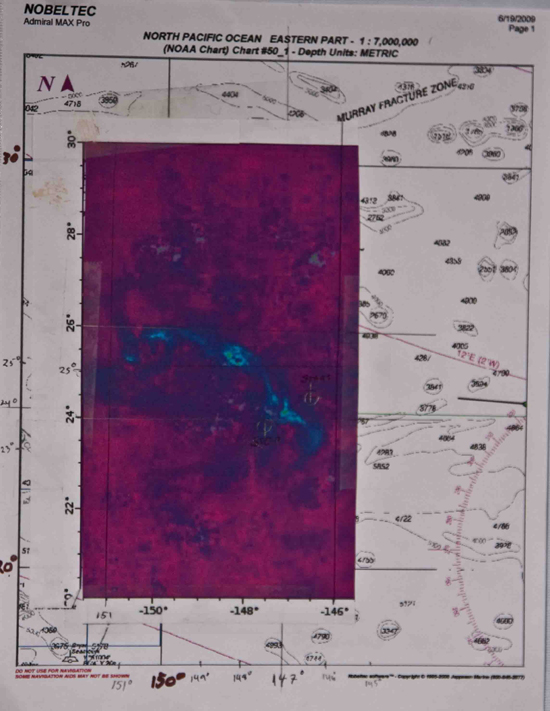