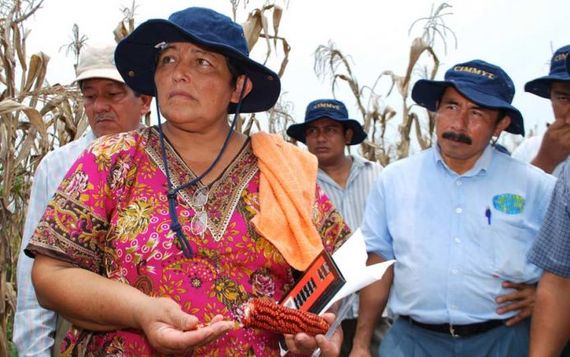 Sin maíz, no hay pais. Without corn, there is no country. That's what Adelita San Vicente Tello and small farmers from across Mexico chanted as they stood up to Monsanto's risky efforts to grow and test genetically engineered (GE) corn seeds. These crops in the field could contaminate and jeopardize traditional varieties, and the source of farmer livelihoods.

Next week, as part of a global Food Justice Summit in Hawai'i, San Vicente Tello -- an agronomist and leader of Semillas de Vida (Seeds of Life) -- is joining three women from across the globe to share their stories and their life's work for a better food system. And I am lucky enough to join them.

Hawai'i has become a flashpoint both because it's an epicenter of GE seed production and because locals have been building a strong movement to challenge corporate, industrial agriculture. Three islands have already passed some form of law to protect vulnerable communities from use of the hazardous pesticides that accompany GE crops, although pesticide corporations have tried to tie these policies up in court.

The cost of corporate control

Most genetically engineered crops being tested in Hawai'i are designed to either contain an insecticide or be resistant to a chemical herbicide -- like Monsanto's RoundUp or Dow's 2,4-D. And these engineered traits are often "stacked" on top of each other, licensed and cross-licensed by a handful of multinational corporations that rule global markets. The "Big 6" -- Monsanto, Dow, DuPont, Syngenta, Bayer and BASF -- own and manufacture a majority of the world's seeds and pesticides, with all but one of them testing seeds on farmland in Hawai'i. Monsanto alone owns over a quarter of the global seed market, and it's all about to get more concentrated and if Dow and DuPont's recently publicized merger goes through.

Pesticides and GE seeds grown in Hawai'i test fields have local, national and global impact. Wherever they are grown, the seeds can cross-pollinate with traditional or non-GE varieties - threatening indigenous seed saving practices, organic certification or even exposing farmers to patent infringement lawsuits from the Big 6. And the pesticides that often accompany GE crops can damage neighboring crops and contaminate air, soil and water, often having a serious impact on the health of local communities. From a test field in Kaua'i to farmland in Iowa to seed and pesticide packages pushed on farmers in India, frontline communities around the world are experiencing the impact -- and damage -- of this approach to agriculture.

From corn to kalo

From Hawai'i to Mexico, a movement for food justice is growing, rooted in rich food cultural traditions. People are standing up for the the thousands of varieties of corn are still planted in Mexico, and used in over 600 Mexican dishes. The varieties -- or landraces -- have grown up to fill very specific agroecological niches, and address very specific farming challenges from wind to salinated soils to unrelenting pests. An impressive 3 million rural Mexican farmers grow crops, including corn, to help feed over 15 million in their country. And the introduction of a handful of patented GE corn varieties threatens the diversity of the existing varieties, limits choices for farmers and endangers this critical food source. Local communities are successfully pushing back.

While GE corn seed from Monsanto and DuPont is grown and tested in Hawai'i, and shipped to places like Mexico for planting, the connections don't stop there. Hawai'i also shares deep connections to indigenous foods, including kalo (taro), a central element of the Hawaiian creation story. Some 100 of 300 varieties of kalo remain, echoing the role and importance of corn varieties in Mexico and beyond. For years, Hawaiians, especially kalo farmers, successfully fought off the introduction of genetically engineered taro after the University of Hawai'i began patenting some varieties and quietly engineering others.

And while that effort has been largely successful, it hasn't stopped pesticide corporations and the University from pushing for more GE food crops on the islands.

A movement has grown up in Hawai'i and is actively promoting malama 'aina, emphasizing the importance of taking care of the land that feeds people. The phrase could apply to communities in Mexico, just take this passage from a speech by San Vicente Tello:

"The defense of corn is not just to preserve our sacred plant. It is also fundamental to sustaining Mexico as a living genetic reserve of important varieties of fruits and vegetables that feed humanity. This great agro-biodiversity would never exist without the campesinos/as [peasant farmers] who, over centuries, have fed and nurtured a proud culture which is an example for many countries."

For years, Mexicans have fought Monsanto and DuPont to stop the companies from planting seeds and challenged international trade policies that enable these activities. And like their Hawaiian counterparts, Mexican farmers seem victorious for the moment. The country's courts have been playing ping-pong in their decisions. Most recently the higher courts ruled for protections of the seeds, and in diversity, a direct challenge to Monsanto and DuPont, corporations with a big stake in the GE market. Let's hope the decisions in support of local communities and farmers stand.

Determined to reconnect to 'aina

San Vicente Tello is one woman among four traveling across Hawai'i next week. What do these four women, from four different cultures and countries, have in common? 'Onipa'a, or steadfast determination. It was the phrase frequently used by the fierce Hawaiian leader, Queen Lili'uokalani. And more recently it's become a mantra of the Hawaiian sovereignty movement, so it's fitting that these women are pushing for food sovereignty. Along with Adelita San Vicente Tello, the women joining the speaking tour are:

In pursuit of a resilient and equitable food system, they have all faced tremendous odds against powerful corporations and governments. For her part, San Vicente Tello continues to remain hopeful. Like the other women, she reminds us that the food system doesn't have to be this way, that seeds should be free of patents and corporate ownership, freely passed on to us by family farmers in the age-old tradition of saving and exchanging seed. "When all is said and done," says San Vincente Tello, "we are children of corn. It's our life, and we need to protect it."