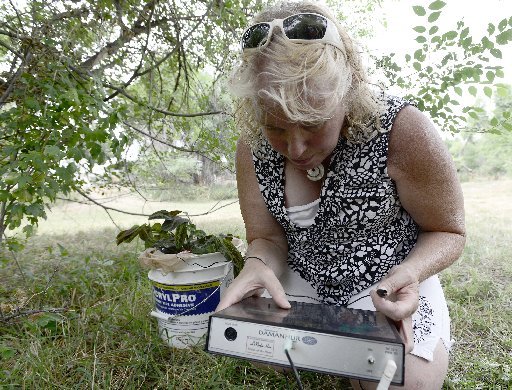 Susan Jeremy's horse leads us to something peculiar, down the hill behind the Three Leaf Farm in Lafayette, Colorado.

Like the story of the burning bush, this plant seems to have something to say, as well -- at least based on the reaction of Jeremy's horse, Blue.

Blue walks straight up to the small prayer plant in a pot and stares at it intently for several minutes, while the plant "plays" an improvisational tune through small speakers propped on the dirt.

A small red alligator clip connects to one of the plant's leaves. Another "grounding" cord is wedged into the soil, at the plant's roots. Both cords connect to a biofeedback machine, which is more typically used to measure changes in the body, such as heart rate, via electrical sensors.

Today, that machine is synced with a synthesizer, which supposedly translates the plant's energy levels, as measured through biofeedback, into audible tones, which are then played through speakers.

In other words, this machine is said to give plants a voice that we can hear.

It's the first time Jeremy has heard of anything like this, so she's not quite sure if -- or how -- it could be possible.

"But Blue seems to think so," she says, patting her horse's neck.

I've never heard of singing plants before either, but I can't deny I hear noise coming through the speakers. It's not pretty, like a classical ballad, and it doesn't seem to have any rhythm or pattern I can discern. I audibly wonder if it's a coincidence or a scam -- a recording simply being played through the speakers.

In response, the human voice behind this project, Teresa Helgeson, reaches over and removes the clip from the leaf. The sound stops. We wait. She clips it back on, and the sound picks up again.

Helgeson isn't a botanist, a scientist or even much of a green thumb, she admits. She's an energy worker who stumbled across this technology when she was visiting Damanhur, Italy, in 2007.

Damanhur is an "eco-society" -- a 30-year-old living laboratory that experiments with ways that humans can better co-exist with the environment, using both ancient traditions and cutting-edge technology, according to its website, damanhur.org.

The United Nations has named this community a model for sustainability.

Hegelson says she was walking through the forest when she heard "the most amazing, angelic music I had ever heard." She asked what CD was playing, so she could buy a copy.

It was a houseplant.

Deeper into the woods, she heard a different kind of music; this was a birch tree. (Each plant has its own voice, she explains.)

She asked to buy the equipment, but the residents said it wasn't for sale. She eventually convinced them to sell her one of the small black boxes, which she says she brought home and eagerly connected to her plants back in Colorado.

Three months later, while meditating, Hegelson says she saw a vision of a different plant, a prayer plant. She found this type of plant, connected it to the clip, flipped through the different frequency options (sort of like a radio station) and after about 10 minutes, "Pixie found her voice."

Pixie the prayer plant now "trains" other plants how to use the equipment, Hegelson says.

She knows it sounds crazy. When she tells people about it, some laugh, some ask her what she's smoking. Some are freaked out. Many are skeptical.

Others, such as Kathy Ganev, a holistic health coach and Shamanic healer in Superior, say it makes sense, based on her beliefs that everything is made up of energy.

To back up the machine, Hegelson cites various claims and books, such as "The Secret Life of Plants," published in the '70s by Peter Tompkins and Christopher Bird. The book, largely considered "pseudoscientific," explores the physical, emotional and spiritual relationship between plans and humans.

She also refers to the "Backster Effect," based on research by Cleve Backster that suggested plants can react to thoughts and threats, as measured on a polygraph machine. One problem with his theories, critics said: Plants don't have brains or nervous or sensory organs, so they can't experience emotions, pain or consciousness.

In 2006, the TV show "MythBusters" conducted a series of experiments on plants that determined the Backster Effect was, in fact, a myth.

Still, when Hegelson detaches the clip from her plant's leaf, the sound stops, and when she connects it to a different tree, a new song starts.

I can't believe it, yet I can't not. I hear it with my own ears. I decide to smile at the mystery. I stretch back underneath the shady branches and listen.

A version of this story originally appeared in the Boulder Daily Camera. Read more stories from the weirdest city in America, Boulder, Colorado, here: Only In Boulder.