Captain Charles Moore had an unexpected discovery in 1997. Traveling between Hawaii and California, Moore is said to be the first to document what became known as the Great Pacific Garbage Patch.

Writing in his new book "Plastic Ocean," Moore says he didn't know he would "gain a surprising amount of notoriety as the 'discoverer' of the Great Pacific Garbage Patch." Since then, Moore has spent time learning about the Pacific plastic dump and the impact that so much plastic has had on fragile ocean ecosystems.

While one scientist has argued that the Great Pacific Garbage Patch isn't "twice the size of Texas" as others have suggested, the amount of plastic in the ocean is still an important concern.

Moore contends that the term "garbage patch" is misleading and that it is more like "plastic soup."

Speaking about the plastic in the Pacific, Moore said, "It's something that's new. It took a long time for us to believe that this change we're noticing in our climate was due to human activity; very hard to believe. This is an easier sell because it's visible," reported The Coast News.

"It's not hard to make the connection that fish are getting tangled up in this, that we're turning the beaches into plastic sand; that there's a coral reef habitat in the middle of the ocean; that there are deleterious consequences of our trash," he said.

Adding to the growing collection of garbage that is swirling in the Pacific, scientists estimate that up to 20 million tons of debris from Japan's tsunami this year is making its way east toward Hawaii.

Be sure to check out these photos of an expedition to the North Atlantic Garbage Patch.

For more information about "Plastic Ocean," on sale October 27, visit the book's website. 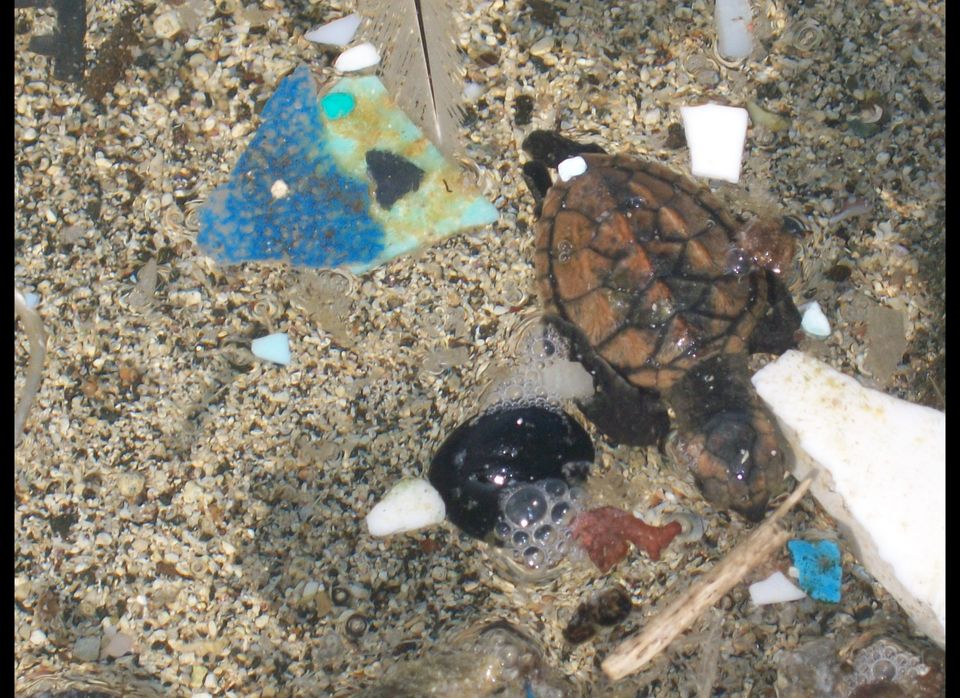 1 / 10
Baby sea turtle, on its way out to sea, navigating plastic at Kamilo Beach, 2009
Janiece Tanner-West