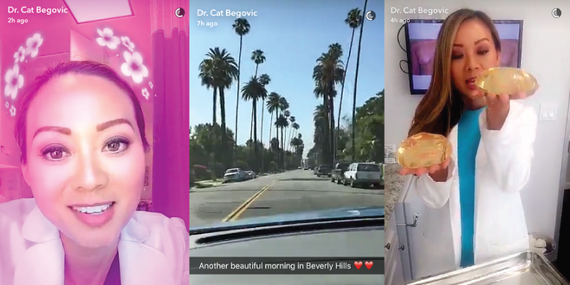 The selfie-centered nature of Snapchat is both the ignition for analytical comparisons of girls' body parts and, with popular accounts of plastic surgeons like Dr. Miami and Dr. Begovic, the seeming proximity to fix it.

"I wanted to be able to show (patients) it's not as scary as you think," Dr. Begovic says. "And I try to present things in an educational way so people can see it doesn't have to be like that."

But by pairing graphic shots of nipple incisions and fat suctions with documentation of her day ending by sliding into a bright blue Bentley, or showing off a new Chanel necklace, Dr. Begovic is selling to teens, who are by far the biggest age demographic using Snapchat, what success as a woman in medicine can look like in both gritty and gorgeous detail. With grossly low numbers of women in well-paying, dependable Science, Technology, Engineering and Math (STEM) fields due to social discouragement, Dr. Begovic's Snapchat channel, which has amassed over 80,000 viewers, is a personal motivator for young girls who otherwise feel alienated in STEM fields.

Dr. Nilanjana Dasgupta, a psychology professor at the University of Massachusetts at Amherst, researches why women drop out of STEM fields who are otherwise interested in it. She recently published a report on the impact of role models on the retention of girls and women in STEM fields and found that the mere scarcity of women in STEM undermines confidence and motivation -- whether consciously or unconsciously.

"It's not because of inadequate performance," that women are dropping out, she says, "but more because of the idea that scientists or engineers are almost always men."

The stereotype influences students' decisions, and is oftentimes de-motivating even if the student has started pursuing the field, Dr. Dasgupta says.

"Women who are talented in math and science may drop out of STEM because they believe, either consciously or unconsciously, that they don't belong in it," reads her report. She clarifies that from the outside, it's assumed the student is making a free choice, but in reality it is a reactionary or limited choice made due to an environment where the student's gender is socially ostracized.

In response, she says, students pursuing STEM fields should be introduced to female mentors and peers whose success seems attainable to them.

Dr. Begovic is largely restrained from posting her work on other social media networks due to rules banning graphic content. Because Snapchat doesn't -- or can't -- punish X-rated content, Dr. Begovic's Snap stories are unfiltered, complete with scarred nipples, syringe pokes, dots of blood and the puffy, irritated skin of those in plastic surgery purgatory. Those harsh images are paired with a diary of Begovic's sunny, glamorous life picking out marble for her new kitchen renovation or bussing her daughter to ballet in her luxury car.

It's the framing of the Snapchat story as simultaneously the gory and gorgeous truth, that's likely to make women's success be inspirational and seem attainable to others, according to Dr. Dasgupta.

Mahidely Montes is a sophomore at University of Colorado, Denver studying biomedical engineering, who's a fan of Begovic's, and says Begovic's Snaps inspired her to pursue becoming a dentist.

Dr. Cat Begovic is the type of female every girl should look up to. #Lifegoals

"I always believed that it was going to be a really rough path to take," she explained via email, "but because of her story I am more than motivated that anything is possible," she says.

Dr. Dasgupta calls this a social vaccine: similar to the way a biomedical vaccine protects the physical body against viruses by infiltrating it with said virus, so too does exposure inoculate young women's minds against noxious stereotypes.