There's no doubt that plastic surgery can make you look younger, but can it also make people like you more?

A study published last week in the journal JAMA Facial Plastic Surgery found that women who underwent facial rejuvenation surgery were perceived to be not only more attractive but also more likeable than they were before the surgery.

The findings illustrate a phenomenon known as "facial profiling," a sort of cognitive shortcut we use to collect information about other people based on available visual cues, namely, their facial expressions.

"We engage in facial profiling as part of an evolutionary mechanism to assess the intent of others toward us," Dr. Michael Reilly, a plastic surgeon at the Georgetown University Medical Center and the study's lead author, told The Huffington Post in an email. "Our judgements of people's resting facial expressions are an overgeneralization of the dynamic facial expression that they most closely resemble -- meaning that if the corners of someone's mouth are turned down at rest, they are not going to be judged as likeable or as socially skilled since it appears that they are sad or angry. If the cheeks are full and high, they are going to be judged they opposite, since they appear to be happy."

It's well-known in psychology that humans have a natural tendency to judge people's character based on their appearance. Studies have shown that we make judgements about a person's character within seconds of seeing their face for the first time -- and these judgments tend to be consistent with the way other people judge the same face.

As the new study shows, these perceptions can be manipulated by plastic surgery, which changes the appearance of a person's resting facial expression.

They found that the women's post-operative photos were rated as being more likeable, higher in social skills, more feminine and more attractive. There was no significant change, however, in perceived trustworthiness, risk-seeking, extroversion or aggressiveness. 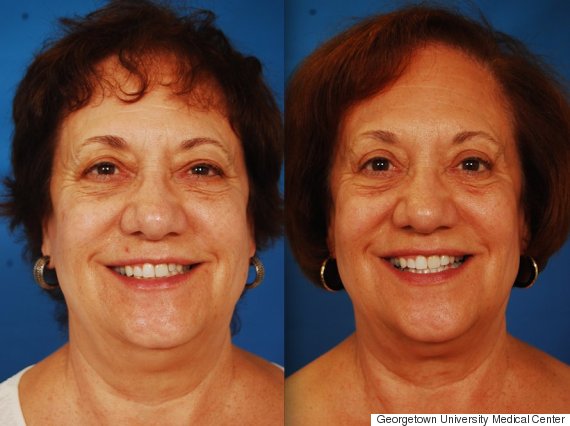 The before (left) and after (right) photos of one of the study's participants, who was rated higher in femininity, social skills, attractiveness and extroversion after getting a lower and upper eye lift.

Why? The surgeries caused the women's resting facial expressions to appear happier, which in turn led people to believe that they were more likeable.

Likely for this reason, the face-lift and lower eyelid procedures resulted in the greatest changes in perceived personality. Because these surgeries turn the corners of the mouth up and lessen the look of tiredness around the eyes, they had a powerful effect on conveying pro-social personality traits.

But some women's personalities were actually rated more negatively after their surgeries.

"Patients and surgeons need to be aware of the greater changes that are happening to a patient's aura when they undergo facial-altering surgery," Reilly said. "We have yet to prove why some of our patients did not have positive results, but our theory is that if there is any detectable unnaturalness to the patient's look after surgery, this can negatively impact their aura."