Humans will now be forever inscribed into the Earth's geological history. Our everlasting signature? Plastic-infused stones.

The newly identified stone, according to a report from The Geological Society of America, has been officially named plastiglomerate. It is formed when plastic trash melts and fuses together with natural materials such as basaltic lava fragments, sand, shells, wood and coral, resulting in a plastic-rock hybrid. 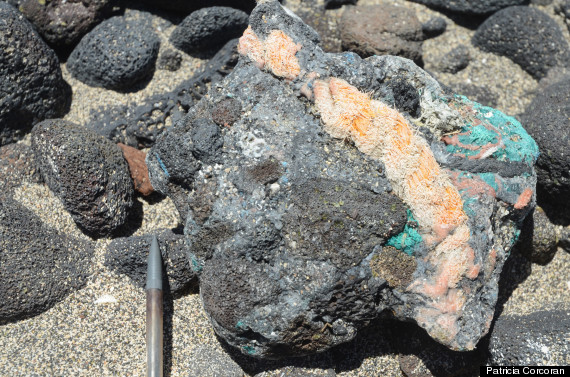 In the photo above: An example of clastic plastiglomerate found on Kamilo Beach. Clastic type is a combination of "basalt, coral, shells, and local woody debris" that are "cemented with grains of sand in a plastic matrix."

"In the future, when people see [plastiglomerate] in the rock record, they'll be able to know, 'Well, OK, people at this time were polluting the planet [with plastics]. What a travesty that these people were doing that,' " Patricia Corcoran, a geologist at the University of Western Ontario and study lead author, told The Huffington Post.

"Now that could be one side of the coin," she explained. "The other is that people continue to do this and it'll just become the norm to have this type of material preserved for all eternity."

This discovery, as the New York Times reports, might be another indication that Earth has "entered a new geological era" referred to as the Anthropocene epoch -- the period of time wherein humans began to leave significant and lasting impacts on the planet's landscape and atmosphere. Earth is currently in the Holocene epoch, which began almost 12,000 years ago. 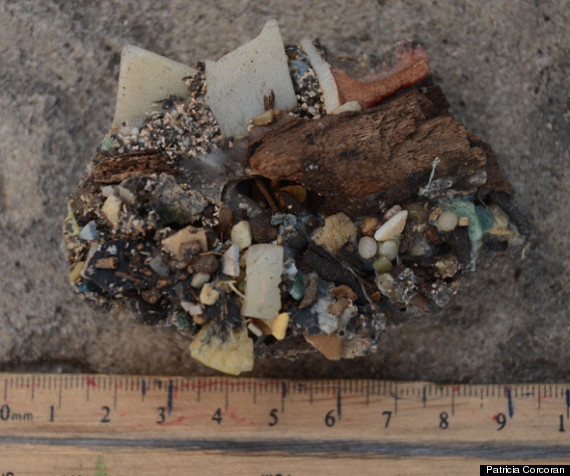 In the photo above: Fragment containing plastic pellets and “confetti” -- small pieces of plastic from different sources -- with woody debris.

Corcoran and her team traveled to Hawaii to observe the new substance after learning about it from sea captain and oceanographer Charles Moore, who discovered cases of plastiglomerate on Kamilo Beach on Hawaii's Big Island in 2006.

Kamilo Beach, also considered one of the world's dirtiest beaches, became the perfect spot to observe this new substance because of how the ocean's currents push garbage, plastic debris and other ocean pollutants onto its shores, as it does in other beaches on the southeastern shores of the Hawaiian Islands.

Researchers first assumed that the melted plastic was a result from possible flowing lava from Hawaii's active volcano, but discovered their samples were a result of beachside campfires that took place within their surveyed area. They point out in their report that while campfires were "responsible for the plastiglomerate on Kamilo Beach, it is conceivable that the global extent of plastic debris could lead to similar deposits where lava flows, forest fires, and extreme temperatures occur."

While surveying Kamilo Beach, Corcoran and her team found plastic debris with markings that indicate they have traveled all the way from places like Asia and Russia. A lot of that debris, Corcoran said, is coming from the North Pacific Subtropical Gyre, also known as the Great Pacific Garbage Patch.

But plastiglomerate is likely to exist across the globe.

"We find plastic debris -- and an abundance of it -- on many shorelines in places like India, Africa, even on the shoreline of Iceland," Corcoran said. "Plastic is everywhere," and inevitably, it will become melded with beach sediment.

So, what can we do to permanently reverse the damage we've done with plastic pollution? Corcoran said every country on the planet would have to suddenly agree to never use plastics again, which, she notes, is extremely unlikely.

But "we can all pitch in and help through beach cleanups and not using as many plastic products," she insisted. "Maybe by raising awareness [of how serious the problem is], people will start to say, 'OK, that's kind of disgusting so maybe ... I should think twice before I buy a bunch of balloons or use a straw. Even small things make a difference."