Continents grow like onions, with rings of younger rocks added layer by layer to the perimeter of an ancient landmass. But even though scientists know where continents get bigger, plate tectonic models have never fully explained the how.

Plate tectonics describes how the Earth's surface is divided into many tectonic plates, which are pushed and pulled about the thin crust on the surface by currents inside the mantle, the hotter, rocky layer under the crust.

One of the most enduring plate tectonic puzzles is how continental margins gobble up huge pieces of new crust without choking. Continents grow when new crust attaches at subduction zones, locations where a tectonic plate subducts, or sinks back into the mantle. Often, this new crust arrives as small fragments, called micro-continents, or volcanic island chains. (Imagine these fragments as bumps on a surfboard, but in this case, the bumps are catching a ride on top of flat oceanic tectonic plates, the surfboard.)

But here's the hitch: the reason these fragments smash into the continent instead of sinking into the mantle is that they are too light and thick to subduct. The buoyant crust gets stuck and chokes the subduction zone. Somehow, though, these geologic conveyer belts eventually resume their descent.

"The idea of a subduction zone trying to eat pieces of crust and getting a bit stuck is something we've been working on for a long time," said Louis Moresi, a geophysicist at the University of Melbourne in Australia. "What people really didn't understand was the dynamics of the process. We don't really understand how subduction zones start and stop." [Video: New Model Shows How Continents Grow] 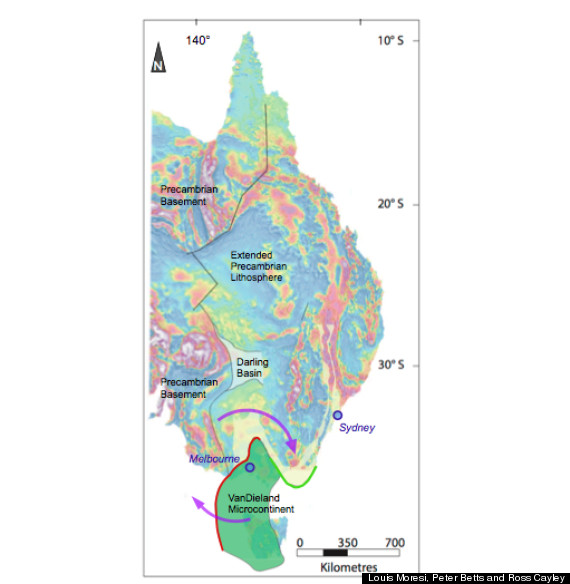 Southeastern Australia's swirling geology formed when a micro-continent collided with its ancient margin 400 million years ago.

Now, a new 3D model seeks to explain how subduction zones sweep in new continental crust and then recover from the collision. The model matches the swirling geology of eastern Australia, where a micro-continent hit more than 400 million years ago, according to the study, published today (March 23) in the journal Nature.

The set of computer experiments shows that a subduction zone re-establishes itself by flowing around the crust stuck in its craw.

"It's like force-feeding an amoeba," said Moresi, lead author of the study. "The subduction zone floods around the whole thing and reconnects in an unexpected and unusual way."

How to eat an island

Here's how it works: Remember that the goal is to make a new subduction zone behind the stuck crust. 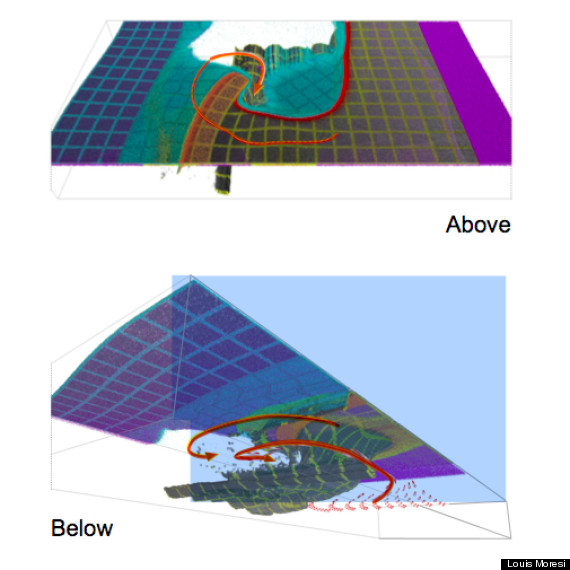 Imagine a giant volcanic plateau, such as an underwater volcano bigger than Iceland, arrowing into the southeastern corner of Australia during the Devonian Period. Immediately after the collision, the plateau "sutures" itself to Australia, switching allegiance from the oceanic plate that delivered it to the continent. This suturing helps choke the subduction zone. In response, a strike-slip fault (which allows horizontal movement between two blocks of crust) rips open along one side of the plateau. The subduction zone "walks" behind the plateau via the strike-slip fault. For a time, a small part of the subduction zone actually curls sideways behind the volcanic plateau. Finally, the boundary stretches out and reconnects, forming a long subduction zone behind the new piece of continent.

"When you get this reconnection, the subduction zone has straightened itself back up and embedded the crustal fragment deep into the continent," Moresi told Live Science's Our Amazing Planet.

The pattern left behind in Australia's geology by the collision matches that produced by the new models. The researchers see the same geologic quilting in the ongoing crash between India and Asia.

"We think this might be key to understanding many of these systems," where there is a congested subduction zone, Moresi said. "It produces this very characteristic geometry."

Advertisement
Copyright 2014 LiveScience, a TechMediaNetwork company. All rights reserved. This material may not be published, broadcast, rewritten or redistributed.