Food production has literally changed the face of the planet - it's the leading cause of deforestation, changes in land use and biodiversity loss. Getting our food to our plates accounts for 70 percent of all human water use and contributes to a significant amount of greenhouse gas emissions and water pollution. All of the environmental destruction, climate change and pollution are not only problematic in their own right, but they're actually making food production more difficult and unpredictable.

In other words, the act of producing food to feed 7 billion people is having such a profound effect on the environment that it's jeopardizing our ability to continue to produce food.

That reality should be raising a lot of concern. Yet a new study by the UN's Food and Agriculture Organisation (FAO) and the Food Climate Research Network (FCRN) at the University of Oxford found that out of 83 countries with government-issued food recommendations, only four consider the environmental impact of dietary choices in their official guidelines: Brazil, Germany, Qatar and Sweden. Two others, the Netherlands and the United Kingdom, have more recently started including sustainability concerns in their food guidelines.

Notably, the report identifies the United States as a place where the alarm was sounded only to be silenced by meat industry interests:

"Industry groups - primarily representing meat producers - focused significant resources on lobbying and argued that sustainability matters should be ruled outside the scope of the guideline's legal mandate. This argument was accepted and publically endorsed by the US Secretary of Agriculture shortly after the publication of the DGAC's report and was ultimately the basis on which sustainability was ruled out of the 2015 DGAs. Importantly, the actual research showing the link between dietary patterns and environmental impacts was never significantly contested by industry."

In a blog post, the Secretary of Agriculture and the Secretary of Health and Human Services claimed that the dietary guidelines weren't the "appropriate vehicle for this important policy conversation about sustainability." Seven months later, no one from the administration has stepped up to identify where that conversation should be taking place.

In the meantime, we just had the hottest April on record, marking a 7-month streak of breaking global temperature highs, and researchers have shown that we can't meet international climate targets without reducing meat consumption.

The Center for Biological Diversity, where I work, just released "Extinction Facts" labels highlighting the environmental cost of three of the most popular meat products on American menus: hamburgers, chicken breasts and bacon. The numbers are staggering. In addition to the carbon footprint of our meat addiction, our appetite for bacon alone results in 331 billion pounds of pig manure - enough to fill 60,667 Olympic-sized swimming pools every year. 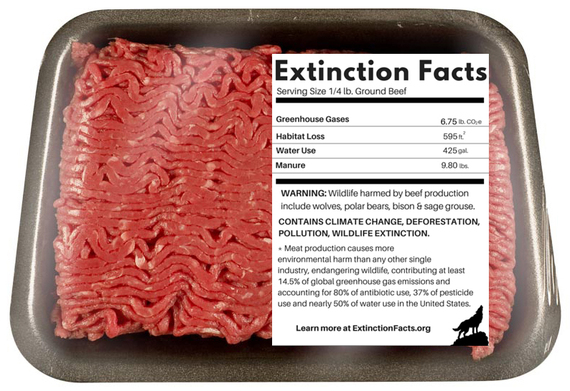 How much longer can we test the limits of our environment? We're not only playing a dangerous game with the future of our climate and endangered species, but with our own food security, too.

The U.S. Dietary Guidelines are only updated every 5 years, but we shouldn't have to wait until 2020 to get sound - and sustainable - dietary advice from our government.

The Dietary Guidelines Advisory Committee already provided the research and recommendation on the need to reduce meat and dairy consumption. Now it's up to the U.S. Department of Agriculture to pick up where it left off and have the policy conversation on how to create a more sustainable American diet. The study on dietary guidelines outlines some excellent models for how to get started. Instead of clinging to our spot at the top of the list of most environmentally destructive dietary patterns, tell the USDA to become a leader in promoting a diet that's better for us and the planet.