One of the things that the Trillion Dollar Platinum Coin is helping to achieve -- besides serving as a wonderful counterpoint that illustrates precisely how crazy the debt ceiling truthers and default denialists are -- is a pretty fantastic development from an educational standpoint. As Joe Weisenthal wrote this week, the platinum coin debate "may be the most important fiscal policy debate you'll ever seen in your lifetime, because it gets right to the nature of what is money."

Some need more remedial education than others. Take, for example, the National Republican Congressional Committee, which tweeted earlier today: 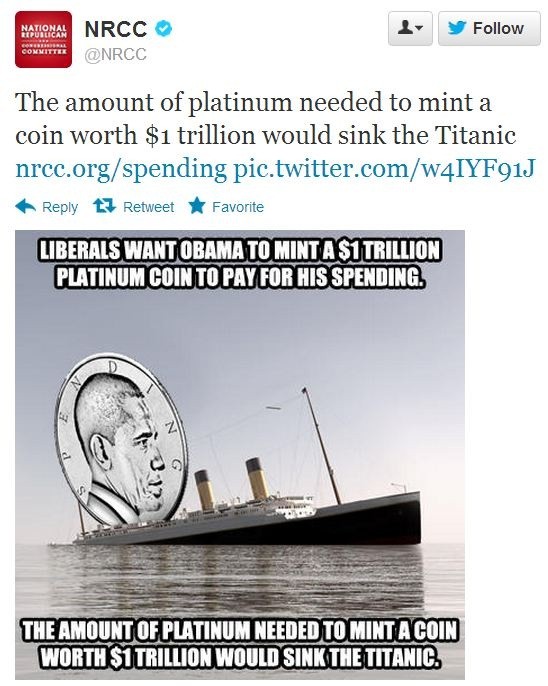 I'm just going to pass the microphone to Matt Yglesias:

Hey @nrcc, how much paper would it take to create a piece of paper worth $100?

The relevant issue, here, is seigniorage, the difference between the cost of producing a currency and its value as currency. Zach Carter and I explained how this all works in a video we shot about the platinum coin, with me playing the part of "The Guy Who Doesn't Understand Where We're Going To Find A Trillion Dollars Of Platinum." We invite the folks at the NRCC to risk learning something by clicking on the video above.

The other important thing to clarify here is that the trillion dollar platinum coin idea is not being put forth by "liberals" who want to use it to "pay for Obama's spending," as the NRCC claims. The platinum coin has nothing, at all, to do with paying down the deficit or permitting additional spending. The only role the platinum coin plays, in the scenario described by those who promote the idea, is an emergency measure that protects the United States taxpayer and the global economy from the catastrophic effects of a debt ceiling breach. This is a myth. As Joe Weisenthal explains, "People who say this (or say we should print a $100 trillion coin) are mistakenly thinking that the point of this exercise is to pay off our debts and get out of the hole."

The point is to stay within the law, while getting around the technical problem of the debt ceiling. So there's no point to the $16 trillion coin or the $100 trillion coin, or anything else so absurd. This is not about having money to spend. This is about avoiding a legal crisis where the government had obligations to much (such as on its debt) but didn't have the authority to borrow and spend money.

It is possible that the NRCC just doesn't understand this aspect of the platinum option, but it's just as likely that they do understand it and are just lying to people about it. Either way, they are petitioning to "stop" the platinum coin. What they need to do is take responsible steps to bring stability to the economy by deweaponizing the debt ceiling.

Platinum Coin: What The National Republican Congressional Committee Does Not Get
113th Congress Facts