*See photos and video of the PlayBook below* NEW YORK -- The company that gave us the BlackBerry - still the dominant phone in corporate circles - thinks its business customers will have room in their briefcases for at least one more device: the PlayBook.

Research in Motion Ltd. showed off the tablet for the first time Monday and is set to launch it early 2011, with an international rollout later in the year. With it RIM is betting on a smaller, lighter device than Apple Inc.'s iPad, which kicked-started the tablet market when it launched in April.

The PlayBook will have a 7-inch screen, making it half the size of the iPad, and weigh about 400 grams (14 ounces) to the iPad's 680 grams (1.5 pounds). And unlike the iPad, it will have two cameras, front and back.

The PlayBook will be able to act as a second, larger screen for a BlackBerry phone, through a secure short-range wireless link. When the connection is severed - perhaps because the user walks away with the phone - no sensitive data like company e-mails are left on the tablet. Outside of Wi-Fi range, it will be able to pick up cellular service to access the Web by linking to a BlackBerry.

But the tablet will also work as a standalone device. RIM co-Chief Executive Jim Balsillie said its goal is to present the full Web experience of a computer, including the ability to display Flash, Adobe Systems Inc.'s format for video and interactive material on the Web. That means the tablet will be less dependent on third-party applications or "apps," Balsillie said.

"I don't need to download a YouTube app if I've got YouTube on the Web," said Balsillie, who leads the company along with co-CEO Mike Lazaridis.

Apple CEO Steve Jobs has resisted allowing Flash on any of the company's mobile gadgets, arguing the software has too many bugs and sucks too much battery life.

"Much of the market has been defined in terms of how you fit the Web to mobility," Balsillie said. "What we're launching is really the first mobile product that is designed to give full Web fidelity."

In part, the PlayBook is a move by RIM to protect its position as the top provider of mobile gadgets for the business set. Balsillie says he has had briefings with company chief information officers and "this is hands-down, slam-dunk what they're looking for."

Analysts agree that RIM's close relationship with its corporate clients could help the company establish a comfortable niche in the tablet market despite Apple's early lead.

"We do think that RIM has a play with enterprise customers because it has established relationships with so many businesses, and its technology is so deeply integrated with their IT departments," IDC analyst Susan Kevorkian said.

RIM is using a new operating system, built by QNX Software Systems, which it took over earlier this year, to harness the power of the tablet, but Balsillie said it will run existing apps for BlackBerry phones.

IDC predicts that the corporate market for tablet computers will grow as a portion of overall sales over the next few years. The firm forecasts that roughly 11 percent of overall tablet shipments, or 6.5 million units, will be to businesses, government agencies or schools by 2014. That would be up from just 2 percent, or 300,000 units, this year. And that figure doesn't count those who buy tablet computers on their own and use them for work.

RIM doesn't want the PlayBook to be just for work - the company invited video game maker Electronic Arts to help introduce the Playbook at an event in San Francisco on Monday - but it's clear that its advantages will lie in the work arena.

The iPad has prompted a wave of competitors, so RIM won't be alone going after the tablet market. Computer maker Dell Inc. came out with its own tablet computer in August called the Streak. Samsung Electronics Co. plans to launch the Galaxy Tab next month and has already lined up all four major U.S. carriers to sell it and provide wireless service for it. Cisco Systems Inc. is also going after business customers with a tablet called the Cius early next year.

Learn more about tablets by checking out our comprehensive guide to 13 tablets to try instead of the iPad.

Technology Tablets Blackberry On The Move 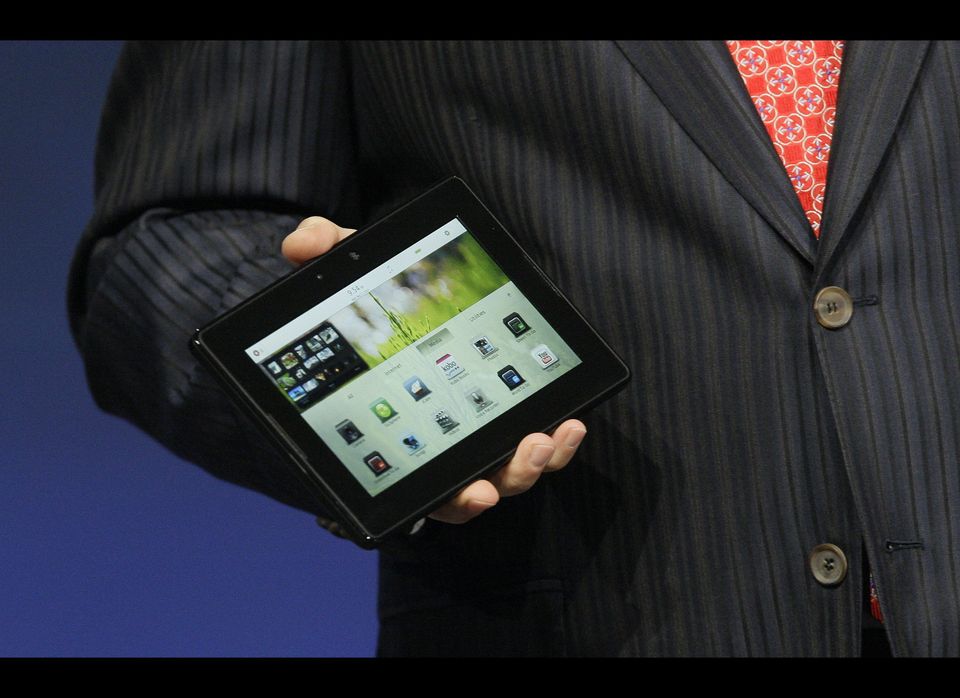 1 / 7
TEC BlackBerry
Mike Lazaridis, president and co-CEO of Research in Motion Ltd. (RIM), holds the new PlayBook during the BlackBerry developers conference 2010 in San Francisco, Monday, Sept. 27, 2010. RIM showed off the tablet for the first time and is set to launch it early 2011, with an international rollout later in the year. With it RIM is betting on a smaller, lighter device than Apple Inc.'s iPad, which kicked-started the tablet market when it launched in April. (AP Photo/Jeff Chiu)
AP