How do we define and measure bullying? This is the question that continues to plague bullying prevention researchers, policymakers, and advocates alike. In his latest blog post, Dr. Justin Patchin ponders on the interactions between his adult friends, who actively tease, mock, and exclude each other, and suggests that perhaps some of our traditional techniques of measuring bullying, such as by asking youth if they'd ever been called mean or hurtful names, may be mis-capturing these friendly interactions.

"Often our research approaches don't allow us to accurately distinguish between good-natured ribbing and malevolent meanness. As I have argued previously, I don't believe that bullying can be done unintentionally. Even though someone's feelings can certainly be hurt without intent, bullying by definition is deliberate."

The issues Patchin ponders in his piece come down to a simple point: Whose perspective matters when it comes to bullying -- an objective observer, the one engaging in the behavior, or the one who feels bullied? Patchin seems to argue that for behavior to be bullying, the one doing the bullying has to consciously intend to hurt someone else. In other words, for bullying to be bullying, it is the perpetrator's perspective that matters. This makes sense when our primary intervention strategies revolve around punishing, criminalizing, or otherwise solely addressing the one doing the bullying. If youth are joking around with friends it's easy to shrug off the behavior, but when we look deeper things become even more complicated.

In some of my early research, I looked at the friendship relations of bully-victim dyads. That is, my colleagues Dr. Scott Gest and Dr. Philip Rodkin asked 1st, 3rd, and 5th graders about who bullied whom in their class, along with asking about their personal friendships and other relations to their classmates. By aggregating the students' perceptions on who bullied whom, we were able to identify frequently named bully-victim dyads. When we examined whether those dyads also named each other as friends, some unexpected findings emerged. Unsurprisingly, the majority (56%) did not name each other as friends. However, 13% were reciprocated friends and the remaining 31% were directed friendships, meaning one part named the other, but not vice-versa. Within that group, those perceived as the "bully" were significantly more likely to name the so-called "victim" as a friend. Although we cannot say for sure from these findings, it seems plausible that the "bullies" who name these perceived victims as friends may indeed think they are joking around, while their target and their classmates perceive the behavior quite differently.

This difference in perception between the person bullying and the person being targeted highlights why I think we need to start separating bullying perpetration and bullying victimization as two different behaviors and experiences, which may not directly align. To me, being bullied is a subjective experience that will vary between individuals. The same mean comment may have little effect on one child, but may be a significant trigger for another.

When I was growing up, for instance, I was constantly teased for being much shorter than my classmates, who took to calling me "Little Debbie" after the snack cake brand. Although I tried to embrace it in high school -- even dressing up as the brand icon for Halloween -- I still cringe when people call me Debbie. Are those that mistake my name bullying me? Absolutely not. Am I reminded about my past experiences when it happens? Yes. If kids are constantly teased about certain characteristics, or experiences, even in a joking way, they may still feel bullied, even if that was not the intent. 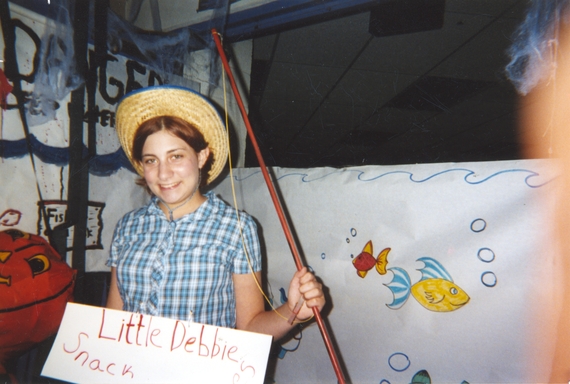 When we think about why we want to prevent bullying, we are often focused on the outcomes for those who are bullied, especially the most extreme outcomes of violent retaliation and suicide. Even if the broad question of, "have you been called mean names," may not capture the intent behind those mean names, and may capture seemingly friendly interactions, it has been significantly correlated with the negative outcomes we're concerned with, whether decreased academic achievement or increased risk of depression and anxiety. What was missing from Patchin's observations of his friends was whether or not they were bothered by the behavior. Even Patchin points out that external laughter might be masking internal hurt. I bet at least one would say they were bothered by it, and if Patchin's poker group had been a group of adolescents, at least one would have felt bullied.

My point is this: We need to stop arguing over the definition of bullying and trying to objectively indentify it. Instead, we need to listen when youth say they've been bullied. That doesn't necessarily mean someone has intentionally bullied them and deserves to be punished. It does mean, however, that we need to find ways to support those who feel bullied and help such youth communicate that even if such behaviors are unintentional they are hurtful and should stop.