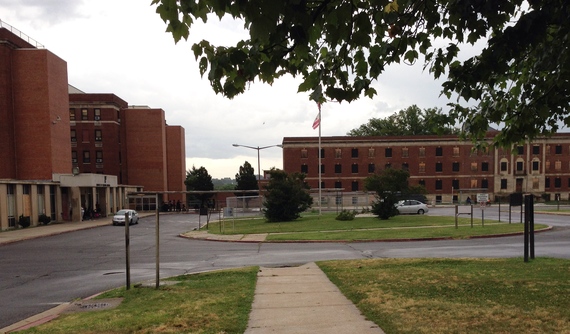 At the District's family shelter at the former DC General Hospital, a new playground is beginning to take shape, offering the promise of much-needed fun and exercise to nearly 500 homeless children.

Earlier this month, during a DC City Council hearing that focused on issues including conditions at the shelter, June Locker, who serves as development director of capital construction projects for the DC Department of General Services, announced that plans to build the playground are under way. Construction is expected to be completed by October. The announcement came as welcome news to advocates for homeless children.

"We found out [about plans to build the playground] when everyone else did," said Heather Wade, Homeless Children's Playtime Project Site Manager at DC General. The program works with teams of volunteers to bring recreational activities to homeless children throughout the city. While the Playtime Project has urged city officials to build a playground at the shelter, Wade emphasized that the organization has not been a lone voice in supporting the playground.

"It's been months, even years, of parents and other people noticing that kids didn't have a safe place to play," Wade said.

Deteriorating conditions at DC General received media attention after 8-year-old Relisha Rudd disappeared from the shelter in March. Police never located the little girl, who was last seen with a shelter janitor. The janitor was later found dead of an apparent suicide.

In testimony at a July 9 hearing, mothers Arriana Foulcon and Shawnikka Jackson testified about the hardship of raising children at the shelter. Both expressed concern about the lack of safe places to play at the facility and both said they were afraid to let their young children out of their sight, even to play with other children in the shelter.

Currently, the parking lot that surrounds the aging hospital building is littered with broken glass, cigarette stubs, and other trash. Trekking to the nearest playground requires crossing a major road. Concern for their children's ability to play was important to both Foulcon and Jackson, but both also stressed their belief that DC General is not a good place for families to live and raise their children, with or without a playground.

City officials, including DC Mayor Vincent Gray agree the shelter is far from ideal.
"I would like to shut it down," Gray said in his budget address earlier this year. Officials have focused their efforts on moving families out of DC General into safe and stable apartments (see story below), but the work is going slowly. With the prospect of additional families entering the shelter system in coming months, DC General is expected to remain in use.

Programs such as the Playtime Project seek to help children find opportunities to play in spite of the hardships their families are facing.

Volunteers bearing storybooks, craft supplies, toys and costumes set up vacant spaces in the old hospital and children clamor to join in the fun. On a recent day, surrounded by laughing, face-painted, three-foot-tall DC General residents taking full advantage of a playtime session, Heather Wade called the playground "a victory for children."

To the kids at DC General, a playground is not about politics; healthy play is something many children take for granted. Yet it is an important part of childhood that can get lost when a family becomes homeless.

"Children get caught in the crossfire of social and political battles. It's hard to help a kid understand why they don't have a playground," Wade explained.

At a July 2 hearing, Dr. Darlene Lawrence, medical director at Unity Healthcare, testified to the heightened medical problems afflicting homeless children. The clinic serves homeless and low-income patients, including the DC General community, and doctors have noted a higher prevalence of asthma and obesity among homeless children because of unstable housing situations, unhealthy diet, and the lack of a place to play and exercise. Wade also noted the effect on a child's developmental health. During childhood, "each day is important to development," and play is essential for helping children develop "motor skills, and social and emotional skills." Part of Playtime Project's philosophy is using play to counter the damaging effects of the trauma of homelessness.

During a recent playtime session at DC General, one of the boys in the playroom handed a volunteer a safety helmet, the type a construction worker might wear.

The volunteer asked the boy what he was playing.

"We're building a park," he explained with a wide smile.