Although our generation is no stranger to the idea that our reliance and commitment to technology is hindering the quality of meaningful relationships -- not just in maintaining them, but in establishing them to begin with -- we still seem to be a little hesitant and guarded about finding love online. If you have ever been on Tinder or similar dating apps, you would be hard pressed to not come across at least one person who makes a joke in their profile along the lines of, "I'll lie about where we met." 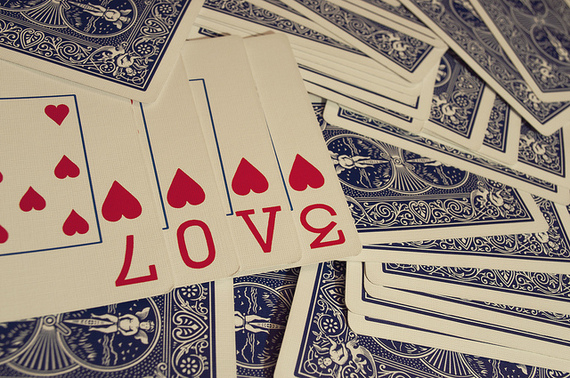 Some people are embarrassed to be on them, or stubborn about their ineffectiveness. And their reasoning is understandable. It's is a lot easier to act like you don't care about finding someone, right? To act like you are such a catch that you'd have no trouble meeting someone the "traditional" way. That, and the fact that online dating apps can feel impersonal and superficial. You scan people's profiles, judge them on what they look like, and make snap decisions.

Then there also is the problem of establishing a connection. Online dating apps have the same nature as others apps, like Instagram: they are essentially a numbers game. Your Instagram worth is essentially based on how many "likes" you get. Running parallel to this is the idea that online dating apps are only effective if you are matched with as many people as possible -- validating your worth.

When it comes to dating apps, there are different kinds of games people find themselves playing: the ones where getting to know one another is playful and fun, and the other kind, the numbers game, where acquiring matches has no further purpose or intent. If you are looking to establish meaningful connections, you need the former. It's not that online dating apps don't work -- just that they need to be used the right way.

And if there is anyone who knows how to incorporate the fun, informality of a game into establishing a meaningful connection, it's Tyler Adams -- this season's winner of The Amazing Race. For people who haven't already heard about it, the reality show mixed things up this season by having half the contestants meet for the first time on a blind date -- Adams being one of these pairs. And although he and his partner, Laura, didn't' find romantic love, they did establish a bond strong enough to rely on one another for 21 days, ultimately winning the entire race.

Ironically enough -- or in a way that kind of makes perfect sense -- Adams also happens to be the co-founder of the new "dating" app 2 Truths, a modern spin on the age-old icebreaker game, "Two truths and a lie."

You can't force love, chemistry or even a connection. Those have to happen organically. But that doesn't mean there aren't ways to help it along -- which is exactly what the new app 2 Truths does. It fixes one of the biggest disconnects between hating and loving online dating: getting matched then never actually building a connection. Because you can only be matched with someone after you learn a little bit about them, taking the impersonal atmosphere off the table, and you do so in a fun, game-like manner, it doesn't feel forced, overly-formal or shallow.

"It's incredible how much you can learn about someone's personality from 3 short statements,' said Adams. "Especially when one of them is a lie. It's the first dating app with a sense of humor."

There is no shame, especially for our generation, in finding people online that have similar interests, someone you would be interested in getting to know more. But you can't expect the intimacy and spark between two people to just happen because there's a match. You can't expect to determine whether or not you "click" with someone through a screen. That is something that can only be done through conversation and, eventually, in person.

I like comedian and actor Aziz Ansari's approach to online dating: "Don't think online dating as dating -- it's an introduction service." Essentially, that is what it is. You aren't dating this person online. Online dating apps hand pick and deliver people you might hit it off with. They let you realize these people exist, and give you a platform to introduce yourself on. But beyond that, it's up to you.

Not only is the 2 Truths app backed by the impressive credentials brought to the table by Adams alone, but it was also developed by the same team who won the Startup weekend in Los Angeles in 2014--which is, modestly, the largest competition for startup ventures in the world. Although still relatively new, considering who the app has been developed and started by, it seems to have a whole lot of potential.